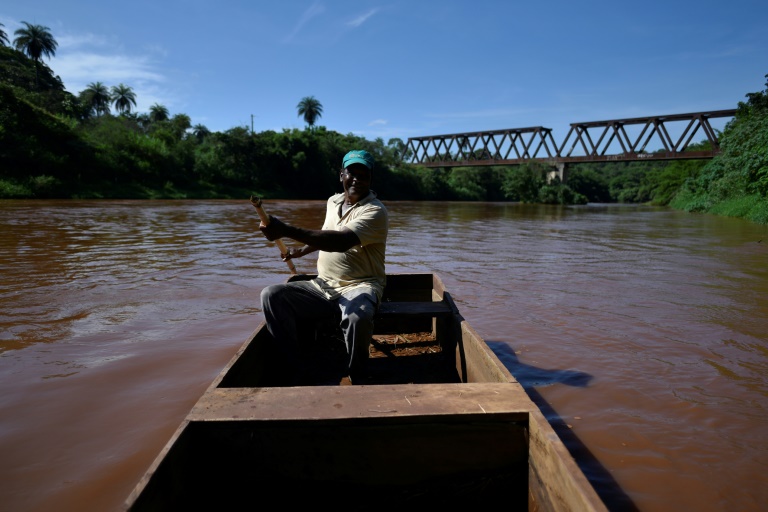 Brazilian fisherman Jose Geraldo dos Santos uses a long pole to push his boat down the reddish-brown Paraopeba River, taking care not to splash himself with water he says is toxic.

Two months after an upstream tailings dam owned by mining giant Vale burst, spewing millions of tons of minerals-laced sludge across the countryside, the 67-year-old says the river is too polluted for fishing or even for his animals to drink.

So contaminated is the tributary to the Sao Francisco River — the second longest in Brazil — says dos Santos, that he has been advised to not even “step in the mud.”

“The researchers who came here said it will take eight to 10 years (for the river to recover),” says dos Santos, who lives about 45 kilometers (28 miles) from the village of Brumadinho in the southeastern state of Minas Gerais, which was engulfed by the waste unleashed by the January 25 dam rupture.

Emergency crews continue the slow process of picking through the mud looking for bodies — at least 210 people were killed and 96 are missing.

In the meantime, Vale, government agencies and environmental groups are still assessing the impact of one of Brazil’s worst industrial disasters on water quality downstream.

Some of the findings differ dramatically.

“It’s so dense and thick that it cannot be called water,” says Malu Ribeiro of SOS Mata Atlantica Foundation in a video released by the non-government organization to highlight the damage to the Paraopeba.

Before the dam collapsed the water was “crystal clear, full of fish,” says Ribeiro.

The disaster was the second involving Vale in three years in the mineral-rich region. The company has tried to contain the contamination by installing barriers to stop poisonous material reaching the Sao Francisco, hundreds of kilometers downstream.

So far, Vale says, its water quality analysis shows toxicity levels near the dam are “below the legal limits for mining tailings” and are “not harmful to health.”

And its technicians predict that sludge from the dam would “not reach the Sao Francisco,” Vale said in a statement Friday.

But SOS Mata Atlantica’s latest data show high levels of toxic waste are already present in the key waterway and that the source is the dam at Brumadinho.

But Brazilian authorities say the tailings have not spread more than one kilometer downstream and blames the increased turbidity on heavy rain.

“It’s normal at this time of year to find high levels of some elements like iron or manganese — these two elements always have higher concentrations during floods,” says Eduardo Viglio of the Geological Survey of Brazil, which is tasked with collecting data on minerals and water resources in the country.

The government agency’s own testing shows oxygen and acidity readings are also “normal,” he adds.

That is cold comfort for dos Santos, who says increased pollution in the Paraopeba has deprived him of an income from fishing.

“The people who handle water treatment have said we can’t use the water,” he says.