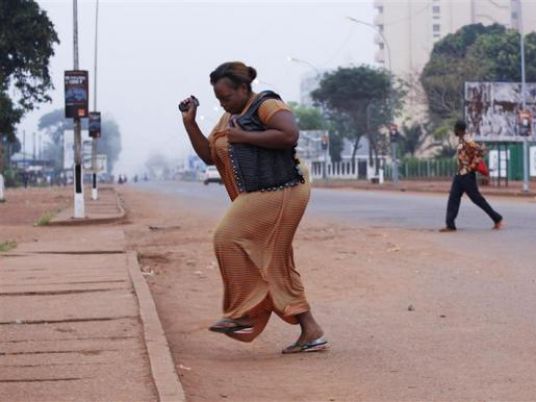 Chadian peacekeepers opened fire on a crowd demonstrating against their presence in the capital of Central African Republic on Monday, killing one person and injuring several others, protesters said.
An officer with the African Union peacekeeping mission (MISCA) confirmed that Chadian peacekeepers had clashed with demonstrators near the airport at Bangui, but could not confirm the death or provide any further details.
The clash was the latest sign of rising tensions between the majority Christian population in Bangui and Muslim Chadian forces, which are complicating international efforts to calm inter-religious violence in the large, landlocked African state.
Locals accuse the Chadian troops of siding with Muslim Seleka rebels, who seized power in Central African Republic in March, unleashing a wave of looting and killings. Many of the Seleka rebels come from Chad.
A spokesman for the international medical charity Medecins Sans Frontieres (MSF) said around 40 people had been treated for injuries at their airport medical centre on Monday, most of them lightly hurt in a panicked stampede.
MSF spokesman Martin Searle said one person had received treatment for a minor gunshot wound, while three others were seriously injured after being hit by a vehicle.
Protesters said the Chadians drove their vehicle at the crowd after demonstrators threw stones at them.
"NO CHADIANS"
France has deployed 1,600 troops to Central African Republic to protect civilians from inter-religious violence.
Chadian peacekeepers were accused of standing aside in March to allow Seleka to oust President Francois Bozize and to install their leader Michel Djotodia as interim head of state.
"No Chadians in Bangui!" chanted members of the crowd on Monday, while others waved placards saying "No to the Chadian army," the protesters said.
Chad began flights on Saturday to repatriate its citizens from Bangui airport amid the rising resentment against them. Some 500 Chadians have already been repatriated, Chadian officials said.
The Chadian troops are part of a nearly 4,000-strong African Union mission meant to impose peace and security in the volatile, mineral-rich nation at the heart of Africa.
The AU operation is due to reach 6,000 troops by the end of January, but many analysts say its ineffectiveness may require the deployment of a UN peacekeeping mission.
U.N. Secretary General Ban Ki-moon is preparing a proposal for a possible mission.
The government of neighboring Democratic Republic of Congo, which is battling decades of violence in its east, announced on Saturday it would send 850 infantry troops to join the peacekeeping mission in Central African Republic.
On Monday, the European Union announced a ban on the export of arms and the sending of mercenaries to Central African Republic, in line with a UN Security Council resolution. The EU ban comes into effect on Tuesday.