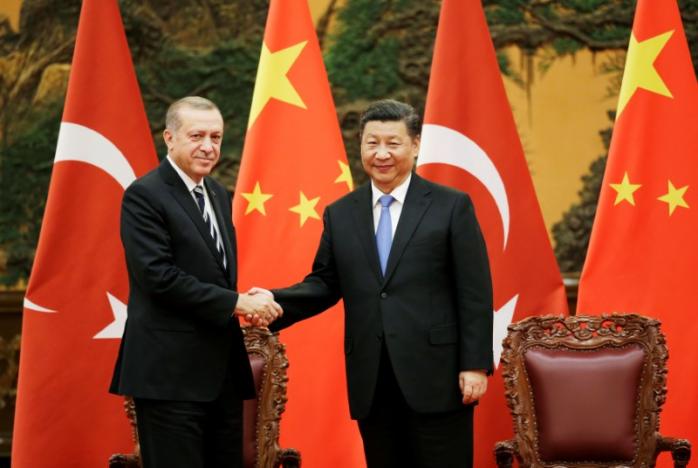 Chinese President Xi Jinping has told his Turkish counterpart Tayyip Erdogan that the two should deepen counter-terrorism cooperation, amid Chinese concern about ethnic Uighurs from its Xinjiang region fighting with militants in the Middle East.

Hundreds, possibly thousands, keen to escape unrest in Xinjiang, have traveled clandestinely via Southeast Asia to Turkey, where many see themselves as sharing religious and cultural ties.

Beijing says some Uighurs then end up fighting with Islamist militants in Iraq and Syria.

Meeting on the sidelines of a summit about China’s new Silk Road plan, Xi told Erdogan that developing strategic cooperation was in the interests of both countries, China’s foreign ministry said late on Saturday.

“In order to promote even greater development of relations, China and Turkey must respect and give consideration to each other’s core concerns, and deepen security and counter-terrorism cooperation,” the ministry cited Xi as saying.

The ministry did not elaborate.

Syria’s ambassador to China told Reuters last week that up to 5,000 Uighurs are fighting in various militant groups in Syria.

Uighur IS fighters vow blood will ‘flow in rivers’ in China

Beijing blames Islamist militants, including those it says come from a group called the East Turkestan Islamic Movement (ETIM), for a rise in violence in Xinjiang in recent years in which hundreds have died.

Rights groups say the unrest is more a reaction to repressive government policies, and experts have questioned whether the ETIM exists as a cohesive militant group.

Officials in Xinjiang have stepped up regulations banning overt signs of religious observance, like veils and beards.

In 2015, Turkey angered China by expressing concern about reports of restrictions on Uighurs worshipping and fasting during the holy month of Ramadan, and Turkish protesters have marched on China’s embassy and consulate in Turkey over the treatment of Uighurs.

The two countries have also quarreled over Thailand’s deportation of Uighur migrants back to China.

Chinese territory offers leniency for 'terrorists' who turn themselves in