Facebook Twitter LinkedIn
Paris has a long and illustrious history, so it's not surprising the city's cemeteries are bursting with familiar names.
There are composers, painters, writers and philosophers — and a few actors and rock stars in the mix.
With such a distinguished list, some of the city's parks of eternal rest have become places of pilgrimage, awe and sometimes just sheer fun.
Pere Lachaise
The best known of the city's cemeteries, Pere Lachaise — often simply called pere — is also its largest.
It's possible to wander for hours along the roads and pathways and past the eerie crematorium and chapel.
Ancient crypts and mausoleums, some with the doors hanging off the hinges as though its occupants have just left, look a little like telephone boxes.
Others are more imaginative.
There's Oscar Wilde's grave, now encased in glass to prevent fervent fans leaving lipstick kisses on the white stone — even though it's adorned with an Art Deco man-in-flight whose pouting lips seem to be asking for exactly that.
Just around the corner is the plain grave of the arguably better writer Marcel Proust.
Alas, he's relegated to second row, attracting only simple offerings on his black headstone.
There's the grave of Victor Noir, nom de plume for journalist Yvan Salmon.
Salmon died in a political scuffle, pretty much an unknown, but in death he has become a weird fertility symbol, despite dying when he was engaged but unmarried.
His life-sized bronze, sculpted to lie as he fell with his hat by his side, is frequently visited by women seeking to improve their fecundity, their sex life or chances of meeting a husband.
They leave a flower in Victor's hat, rub his now-shiny nether regions and maybe give him a kiss on the lips and leave full of hope.
Who else lies there?
Jim Morrison, Edith Piaf, Maria Callas, Sarah Bernhardt, Honore de Balzac, Georges Bizet, Frederic Chopin, Moliere, Marcel Marceau.
Other graves worth seeing
Belgian writer Georges Rodenbach's grave features a bronze of him trying to break out of his tomb. Somewhat disturbing but artistically pleasing.
How to get there
Metros 2 and 3 both have stops near the cemetery. Stops Pere Lachaise, Gambetta and Philippe Auguste all lead to different entry gates to the vast cemetery.
It's worth keeping in mind that the side gates, such as the one near Pere Lachaise Metro station are often closed, and the stop closest to Oscar Wilde and Victor Noir is Gambetta. 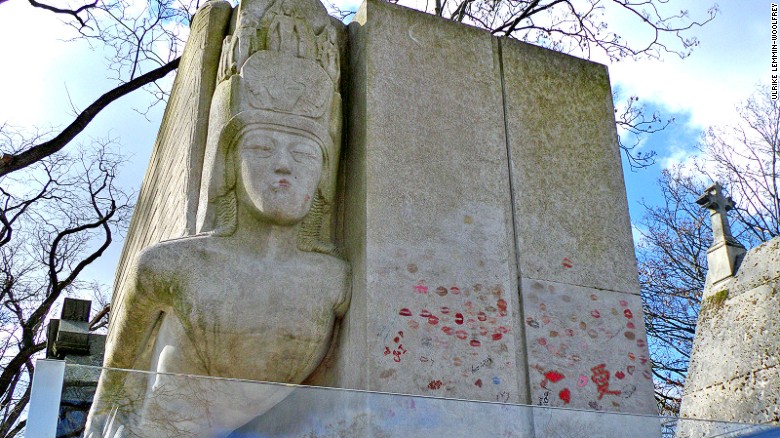 Kissable: Oscar Wilde's tomb in Pere Lachaise cemetery.
Cimitiere de Montmartre
On the hilly slopes of ancient Montmartre within an old quarry, this cemetery offers a perfect example of Paris's mix of history and architecture.
When Georges-Eugene Haussmann set about expanding his 19th century vision of grand open boulevards to open up the area of Montmartre, this cemetery was nearly lost.
It survived only because of loud protests from bereaved families whose loved-ones' graves ended up intact but being spanned by a clunky iron bridge.
Here peaceful streets patrolled by more or less friendly cemetery cats are lined with graves including those of saxophone inventor Adolphe Sax and the De Gas family, whose famous son Edgar Degas used artistic freedom to alter his family name a little.
Who doesn't lie here?
The impressive grave of novelist and "J'accuse" (an 1898 newspaper article accusing the French government of anti-Semitism) writer Emile Zola is somewhat misleading.
He used to be there, but six years after his death, he was unearthed and his remains transferred to the Pantheon national mausoleum to lie in state with other big names in French history.
How to get there
Metro lines 2 and 13 to Place de Clichy, or the 2 to Blanche. Follow the Boulevard de Clichy and turn into Avenue Rachel to enter under the bridge. 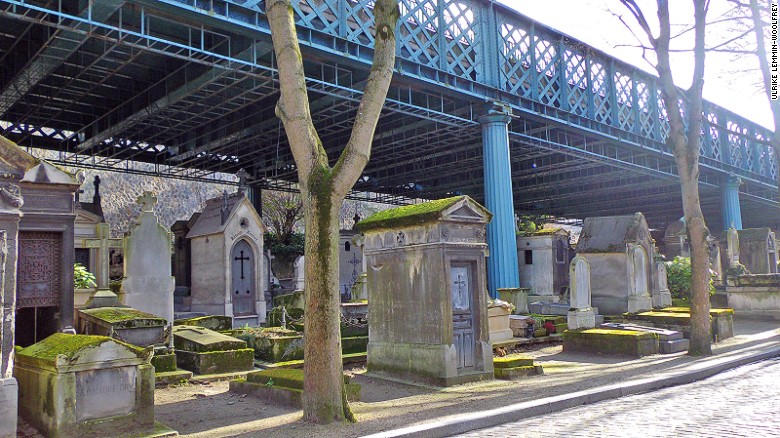 Bridge over troubled graveyard: Montmatre's cemetery.
Cimitiere des Chiens
Strictly speaking it's just outside Paris proper's city limits, but this little cemetery is nevertheless worth the metro ride.
Overlooking the Seine and some not so picturesque apartment blocks, this is a graveyard for dogs and other domestic animals.
Among some grand tombs erected for little pooches, often sadly signed "your loving mom" and telling a story in themselves, there's a sheep, a couple of horses, a rabbit, a monkey and a hen.
The hen's grave is inscribed, in translation: "To my affectionate hen, who lived for 16 years, a faithful inseparable companion, mourned by your mistress who remains, inconsolable. To you I was attached, you will never be forgotten."
Who else lies there?
There's Rin Tin Tin, the famous Hollywood pooch of WWI fame.
Though his grave is a lot less grand than some other beloved terriers' final resting places.
There's the creepily named Drac, the dog of the exiled Princess of Romania; Kiki the monkey, and memorials to WWI trench dogs and horses fallen in service of their country.
How to get there
Metro line 13 to Gabriel Peri, then walk toward the Seine along Avenue Gabriel Peri.
The cemetery, right on the banks of the Seine, is entered not through the main gate, but the small side gate next to it.
A ticket of €3 includes a map of the cemetery highlighting the most interesting residents. 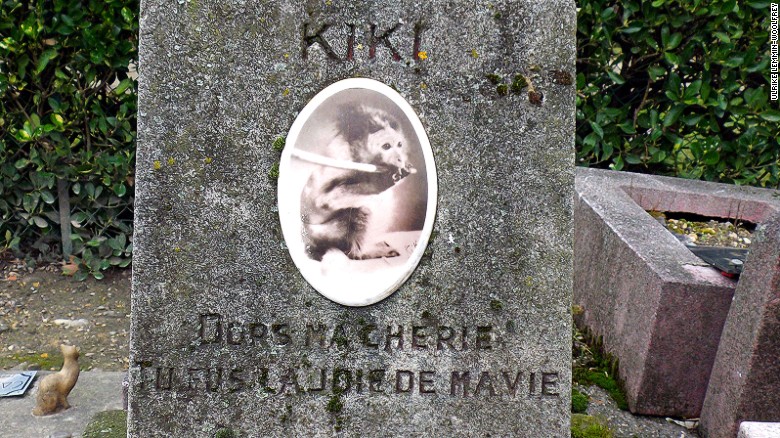 Kiki the Monkey's grave, Cimitiere des Chiens
Cimitiere de Passy
Views of the Trocadero and the Eiffel tower are part of the enchantment of this small cemetery whose grandiose but relatively recent Art Deco entrance belies it age.
Not necessarily studded with the famous names of other cemeteries in Paris, its outer wall is home to an impressive memorial to soldiers who died during WWII.
The graves of painters Edouard Manet and his student and later sister-in-law Berthe Morisot are also here.
Other graves worth seeing
Aviator Dieudonne Costes has a lovely gravestone marking his aerial achievements across the globe.
One unknown's grave boasts a beautiful blue mosaic of a horse, and on another tomb there's a life-sized bronze of a women either trying to get in or out.
How to get there
Metro lines 6 and 9 to Trocadero, then take the Cimitiere Passy exit and follow the wall to the left. 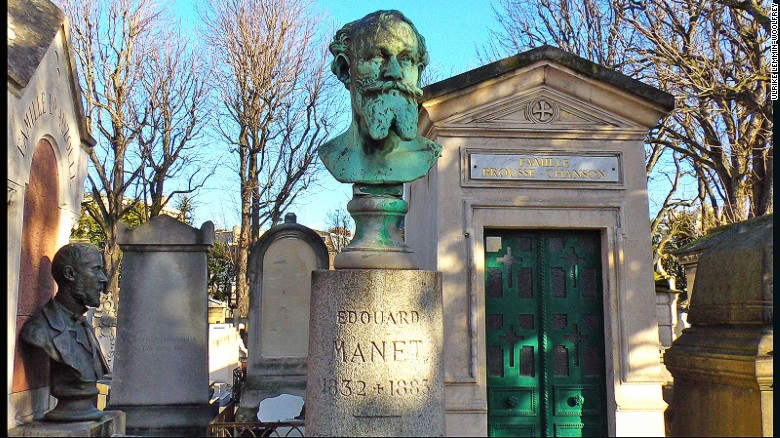 Interred impressionist: Painter Edouard Manet's grave.
Cimitiere de Montparnasse
Two for the price of one: It's made up of a larger and smaller cemetery separated by a road that also hosts tents and semi-permanent housing for a handful of homeless people.
The larger of the two cemeteries is studded with recognizable names.
There's Irish novelist and playwright Samuel Beckett, architect Charles Garnier (he built the Paris Garnier opera house), industrialist Andre Citroen of car fame and, more recently, French singer, songwriter and sex symbol Serge Gainsbourg.
Next to the main entrance on Boulevard Edgar Quinet, Jean-Paul Sartre and Simone de Beauvoir rest together, their graves covered in kisses.
Sculptor Niki de St. Phalle, whose work is exhibited worldwide, has honored two friends' graves with sculptures: Le Chat and L'Oiseau.
Other graves worth seeing
One of the most impressive graves in this cemetery, if not all of Paris' cemeteries, is that of the Pigeon family.
It features life size bronzes of Madame Pigeon and her husband, inventor Charles, lying side by side in bed.
How to get there
Take Metro lines 4,6,12 or 13 to Montparnasse Bienvenue, or line 6 to Edgar Quinet.
To get into the small cemetery, take the Rue Froidevaux entrance as the Rue Emile Richard gates are usually closed. 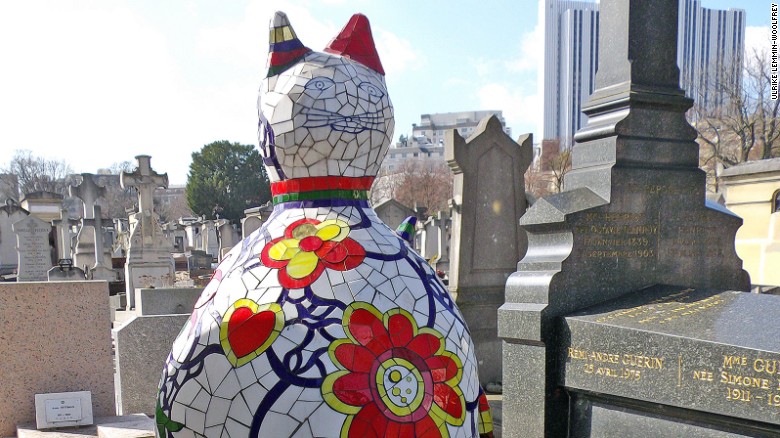 Le Chat by Niki de St Phalle
The Pantheon
This is the domain of France's illustrious men (the only women buried in this stately building being Nobel-prize-winning scientist Marie Curie and Sophie Berthelot, wife of chemist Marcellin Berthelot).
It recently hit headlines in France when empty coffins symbolizing two female WWII resistance fighters were laid to rest there.
They had been due to be relocated from their final resting places to honor them for their efforts, but their families objected to the exhumations.
The Pantheon is one of Paris' most stunning buildings, even if the dome is shrouded in scaffolding while undergoing restorations.
The crypt is positively brimming with big names and the atmosphere is eerie as well as breathtaking.
Who's there?
There's the posthumously mobile Emile Zola; fellow writer Voltaire, writing for the blind inventor Louis Braille and, it seems, entire armies of soldiers, politicians, artists, scientists and thinkers.
How to get there
There's no metro station on the doorstep, so your best bet is to take line 4 to Saint Michel and then stroll down Boulevard Saint-Michel, past the Sorbonne and its many outbuildings and then turn toward the Pantheon at Rue Soufflot. 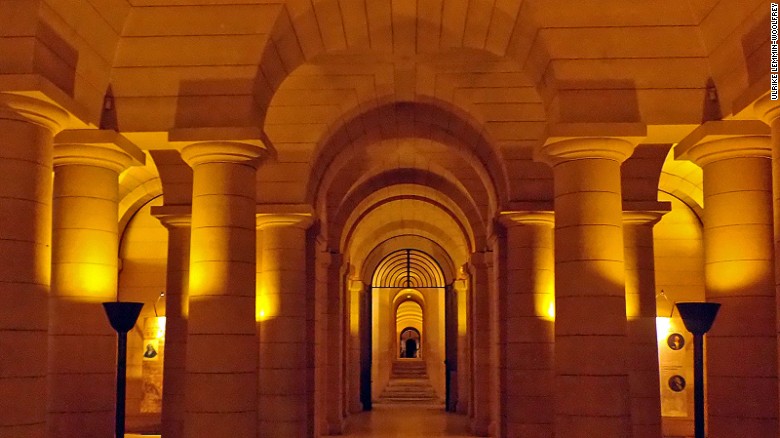 Grand graves: The Pantheon Crypt
Dome des Invalides
Short of the Pyramids (not the Louvre's but Egypt's) you'd be hard-pushed to find a grander tomb for a former head of state.
Emperor Napoleon I has, after a few historical hiccups, been laid to rest under an echoing golden dome, surrounded by his army and some friends and family, in a gigantic brown marble sarcophagus.
It's vast, imposing and utterly grand.
How to get there
Take the Metro line 8 to Invalides. An entry ticket (€9.50 per adult) also allows access to the Army Museum and grounds. Small man, big tomb: Napoleon's final resting place at Les Invalides
Basilica of Saint Denis
This medieval cathedral is sadly overlooked by many visitors to Paris, probably because it's officially located in the suburb of Saint-Denis.
Yet it's within reach of the Metro and so accessible using a normal inner-city Metro ticket, and is one of the most important historical sites in France.
The building dates back to the 1100s and has incredible stained glass windows, high gothic arches and a necropolis containing the remains of 42 kings, 32 queens, 63 princes and princesses and 10 other historical figures, including Saint Denis, the patron saint of France.
Marble effigies of the interred royals sit in state, adding to the splendor of the setting.
Who's there?
All but three of the Kings of France are in the crypt.
Among them are monarchs dating back to the 600s, such as King Clovis I, up to more recent and better known names like Louis XIV and Louis XV, Louis XVI and Marie Antoinette.
The heart of Louis XVII is kept in a pretty little glass urn.
There's also Pippin the Younger and Charles the Bald, Marie-Therese of Austria and Catherine de Medici.
How to get there
Hop on the metro line 13 to Basilique Saint Denis. The €8.50 entrance fee covers the entire necropolis and crypt plus a small historical information display and video. 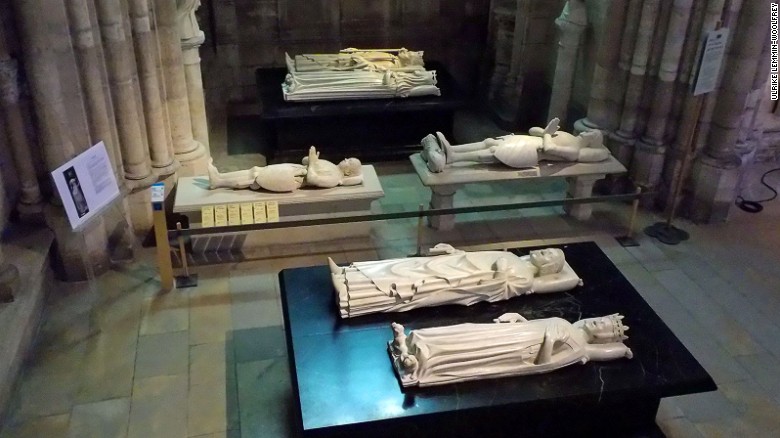 These cities are better at enduring extreme heat. Here’s what they’re doing different

Egypt plans to increase cultivated area with wheat to 7.5 million feddans in 2023