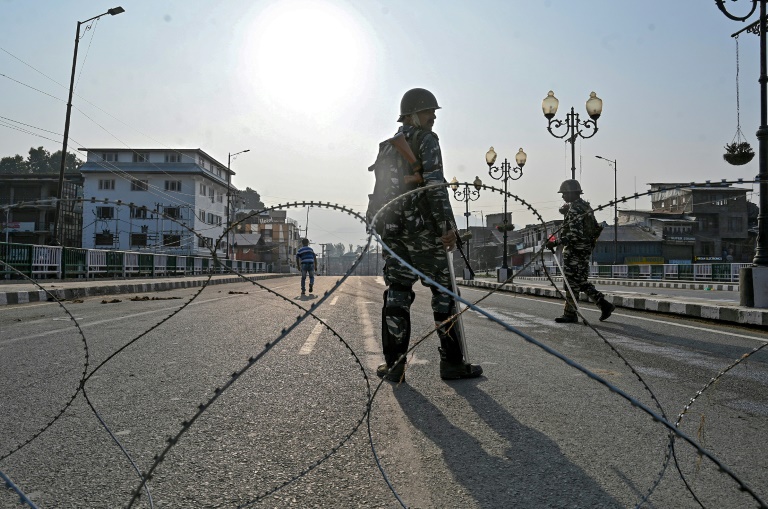 In India’s curfew-smothered Kashmir valley, even the freedom to mourn the dead has been shut down.

When his father suddenly passed away this week in Srinagar, Irfan Ahmad Bhat’s grief was compounded by a military lockdown that not only prevented family members gathering to pay their respects, but also meant many could not be told he had died.

“My greatest regret is that my father’s close relatives could not see his face one last time or perform his last rites,” Bhat told AFP. “This should not have happened.”

Srinagar is coming up to one week without internet or phones — the city’s 1.5 million people cooped up in their homes unless they have a curfew pass.

The lockdown and communications blackout is being enforced by tens of thousands of troops that New Delhi’s Hindu-nationalist government deployed to back its move on Monday to strip the Muslim-majority territory of its autonomy.

So tight are the restrictions that Bhat said he had only been able to inform four family members who live in Srinagar that his 58-year-old father had passed away.

The proper mourning period can only end when the whole family has been told, but “I don’t know how long that will take,” he added tearfully.

Kashmiris are used to mourning. The region has been bedevilled by a three-decade-old insurgency that has left tens of thousands dead.

But the inability to observe basic funeral rites is a stark illustration of the severity of the current clampdown that has transformed Srinagar into a maze of razor wire coils, barricades and checkpoints blocking roads and small lanes alike.

Residents can only walk in public in ones and twos. The few cars on the streets are forced to take complex, zigzag routes between the security points.

“I walked several miles in the dead of night and was able to inform a couple of his relatives. It was frightening,” said Manzoor Ahmad, a family member sat in the dead man’s house in the Fatehkadal district of Srinagar’s old town.

Mohammad Siddiq, an elderly brother-in-law of Bhat’s father, said the situation was even worse than decades ago, before most Kashmiris had individual landlines.

“In the old days, when there were no phones, four people would set out in four directions to inform everyone of a death in the family, but today we couldn’t do that,” Siddiq said.

And the heightened stress levels induced by the military lockdown mean that unexpectedly calling on friends or relatives — especially at night — is more than likely to trigger fear in the household.

Another relative of Bhat’s father, Umar Bhat, said he initially panicked when someone came to deliver the news of the death in the family.

“I heard our door being knocked late at night and someone calling out my name. I was so afraid, thinking police had come to take me away before I realized it was my cousin,” he said.

Outside Bhat’s father’s house, soldiers wearing bulletproof gear watched across a large coil of razor wire spread across a lane cutting off the neighborhood.

“What can we do? This place is now covered in razor wire,” said one man in the street, identifying himself as a businessman without giving his name.

In a separate district of the city, Srinagar’s main SMHS Hospital was almost empty on Friday, with barely a patient entering.

One doctor in the emergency department said there had been less than a tenth of the normal number of patients since the lockdown came into force.

“On an average day we see over 1,000 patients, but now less than 100 manage to reach here,” said the doctor, who also declined to be named.

“More than half of the patients since Monday were found to be clinically fit, no problem. They were just suffering from stress and hysteria,” he said.

“People are afraid, anxious and in panic.”

Image: AFP/File / TAUSEEF MUSTAFA Srinagar is coming up to one week without internet or phones — the city’s 1.5 million people cooped up in their homes unless they have a curfew pass

Kashmir curfew to be eased for Friday prayers: police