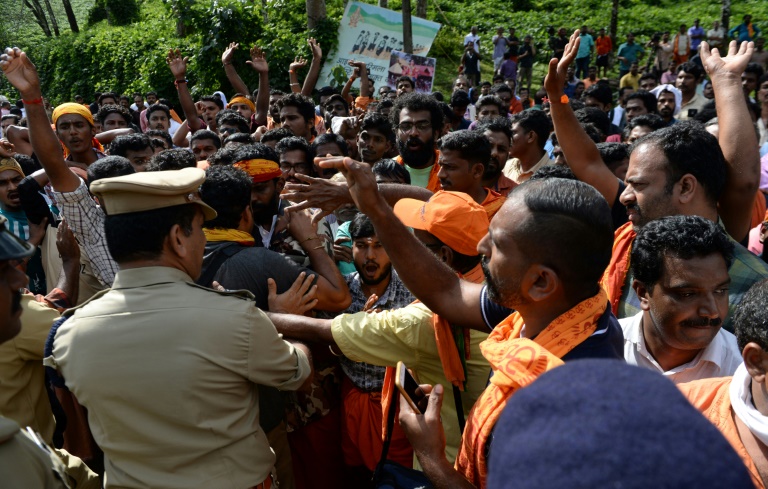 Clashes erupted in India on Wednesday as traditionalists tried to stop women visiting one of Hinduism’s most sacred temples, with police waving batons charging stone-throwing protestors.

Devotees opposed to allowing women into the Lord Ayyappa temple at Sabarimala in the southern state of Kerala earlier surrounded and intimidated journalists, including one from AFP.

Two other female journalists were reportedly injured. Even before the police charge, several people had blood streaming down their faces, suggesting further clashes had taken place.

Last month India’s Supreme Court overturned a ban on all females of menstruating age — judged between 10 and 50 — entering and praying at the hilltop temple.

This enraged traditionalists, including supporters of Prime Minister Narendra Modi’s Hindu nationalist Bharatiya Janata Party (BJP), with thousands protesting in the days before the scheduled opening on Wednesday afternoon.

Kerala’s state government said it would enforce the court ruling and deployed 500 extra police to ensure free access to the remote complex, which is reached by an uphill trek that takes several hours.

At Nilackal, a base camp below the temple, police cleared protestors early Wednesday morning and arrested seven people who were stopping vehicles.

“Anyone who wants to go to the temple will be able to do so without hindrance,” said police chief Manoj Abraham.

“Stern action will be taken against anyone who prevents devotees from going to Sabarimala,” Kerala’s Chief Minister Pinarayi Vijayan said on Tuesday.

One 45-year old woman identified as Madhavi who wanted to enter the temple for the first time abandoned her attempt after activists prevented her climbing the hill, the Press Trust of India reported.

Even though police gave the woman and her family protection and allowed them to move further, they gave up as agitated activists surrounded them, PTI reported.

Biju S. Pillai, a local man in his 30s, was one of those opposed to the court ruling, telling AFP that he returned from working in Dubai to “protect the sanctity of the temple” with his mother and young son.

“No one should be able to change the way this temple has functioned for centuries,” he said. “If any change is made they will have to kill us and go over our bodies.”

“I am here to protest the Supreme Court decision,” said engineer Anisha S., 23, one of a group chanting religious slogans. “We want to save our traditions. Ayyappa needs to be respected.”

Women are permitted to enter most Hindu temples but female devotees are still barred from entry by some.

Two years ago, activists successfully campaigned to end a ban on women entering the Shani Shingnapur temple in Maharashtra state.

Women were also permitted to enter Mumbai’s Haji Ali Dargah mausoleum, a Muslim place of worship, after the Supreme Court scrapped a ban in 2016.

The entry of women at Sabarimala was long taboo but was formalized by the Kerala High Court in 1991, a ruling overturned by India’s Supreme Court last month.

The restriction reflected an old but still prevalent belief among many that menstruating women are impure, and the fact that the deity Ayyappa was reputed to have been celibate.

The Sabarimala chief priest, Kandararu Maheshwararu Tantri, 25, warned this week that “anger could easily escalate into violence if a few egotistical women try to enter”.

“I say ego because no devotee who has faith in Sabarimala will try to break the 2,100-year-old rule… Moreover, there are other Ayyappa temples women can visit,” the Times of India quoted him as saying.

He claimed to have the support of several “scientists” that concurred with the view that the “positive energy” in a temple can be polluted by the entry of menstruating women.

India, Pakistan clash in UN over support for terrorists