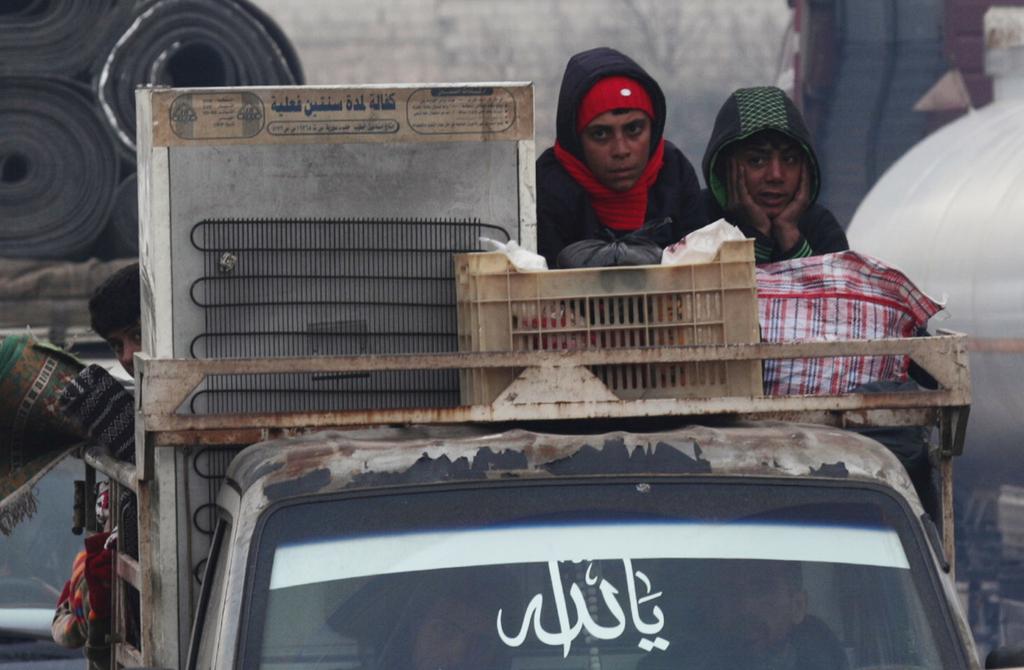 IDLIB, Syria (Reuters) – Khaled Sabri and his family huddle in the makeshift shelter in northern Idlib, still shell-shocked after fleeing the sudden bombardment of their rebel-held town earlier this week.

They are part of an exodus that has shaken northwest Syria, the last rebel redoubt in the country’s nine-year civil war, as hundreds of thousands push toward Turkey to escape a sudden and fast-moving advance by government forces.

Backed by heavy Russian airstrikes, President Bashar al-Assad’s forces have recaptured dozens of towns since last Friday in a major campaign that has stoked tensions between Ankara and Moscow and raised the specter of a new refugee crisis.

“We fled with just the clothes we were wearing because of the heavy bombing,” said 55-year-old Sabri. His city Maarat al-Numan, the second biggest in Idlib, was re-captured on Tuesday in a major milestone for Assad’s stated goal of reclaiming all of Syria.

At the camp outside Maarat Misrin, a northern Idlib town about 20 km (12 miles) south of the Turkish frontier, dozens of families sheltered in plastic white tents, many unsure of where they would wind up.

Jennah, 10, said it was the second time her family had been displaced. Like many others, they had sought refuge in Idlib after being ousted from other areas earlier in the war.

“I was forcibly displaced from eastern Ghouta, and then we went to Maarat al-Numan and the Syrian regime launched a military campaign on Maarat al-Numan, so we came here.”

A United Nations report on Thursday estimated that 390,000 people have fled northwest Syria from Dec. 1-Jan. 27, 80% of them women and children.

Moscow and Damascus say they are fighting jihadist militants who have stepped up attacks on civilians in Aleppo in northern Syria, but rights groups and rescue workers say air strikes and shelling have demolished hospitals, schools and homes.

Turkey, which fears a fresh wave of migrants piling into it territory, adding to the more than 3.6 million Syrians already there, said on Friday it would not tolerate new threats near its border and would act militarily if needed.

Trucks crowded with civilians’ furniture, mattresses and rugs were seen on Friday hauling out of towns across much of Idlib and western Aleppo, another area of northern Syria hit hard over the past week.

“Today we are homeless, humiliated, oppressed and cold. We want to be returned to our homes and towns,” said a woman who called herself Um Abdallah, or Abdullah’s mother, 30, from Maarat al-Numan.