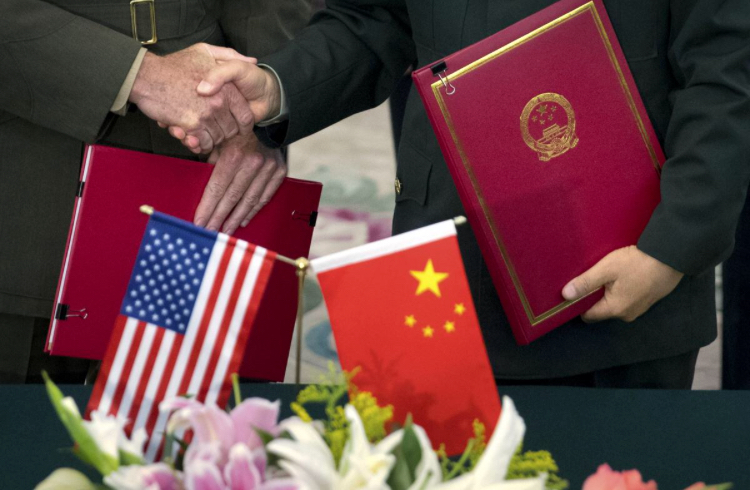 U.S. President Donald Trump’s cancellation of a summit with North Korean leader Kim Jong Un threatens further strain on U.S.-China ties amid a trade dispute that had been intertwined with Beijing’s pressure on isolated Pyongyang.

The United States and China are also increasingly at odds in the disputed South China Sea. The Pentagon this week withdrew an invitation for China to take part in a major naval exercise in Hawaii, and Beijing has ramped up pressure on self-ruled Taiwan, armed by Washington but claimed by Beijing.

Trump on Thursday released a letter to Kim announcing his withdrawal from the planned June 12 meeting in Singapore, which would have been the first between leaders of the two countries.

Although Chinese state media called for continued engagement between Washington and Pyongyang, Trump’s move could mark a split between China and the United States over how to deal with North Korea and its nuclear weapons, experts said.

It also risks adding fuel to simmering trade tensions, just days after China and the United States pulled back from the brink of a full-blown trade war.

“Definitely there are people in the U.S. who want to use this as an excuse for their efforts to push the relationship in the direction of confrontation,” said Jia Qingguo, dean of the School of International Studies at China’s Peking University, referring to the collapse of the Trump-Kim summit.

“This is one of the lowest points in the relationship since the normalization of relations between the two countries,” he added.

China’s foreign ministry on Friday said the government would keep encouraging the United States and North Korea to have direct talks, describing such communication as having a “pivotal” role in denuclearisation.

“Rest assured, China will continue, in our own way, to carry out U.S.-North Korea work, so as to promote the resumption of the dialogue process on the peninsula,” ministry spokesman Lu Kang told reporters.

China has long viewed North Korea as a useful buffer between it and U.S. forces in South Korea. The two also have deep emotional ties; Chinese troops fought side-by-side with North Korea in the 1950-53 Korean War.

But in recent years, relations between China and North Korea had nosedived to the point of a near diplomatic freeze, as Beijing signed on to ever-stricter United Nations sanctions over Pyongyang’s nuclear and ballistic missile programs.

China’s willingness to keep up pressure on its neighbor may now wane.

Even with the summit’s collapse, China must continue to improve ties with North Korea given Kim’s pledge not to carry out nuclear and missile tests, China’s widely read state-run Global Times tabloid said in an editorial on Friday.

A military conflict on the peninsula might see refugees flood over China’s long border with North Korea, or even drag it into confrontation with the United States – both scenarios Beijing would like to avoid.

“China actually has played the role of hidden guarantor for the North Korea-United States summit, so China will continue to promote this meeting,” Sun Xingjie, an expert on North Korea at the Jilin University, said in comments to the People’s Daily Overseas Edition, an official Communist Party paper.

“If they cannot come to the negotiating table, then they will enter the battlefield,” Sun said.

Trump last week hinted that he partly blames China for how summit preparations went awry, saying President Xi Jinping might be “influencing” Kim after the North Korean leader made two visits to China in quick succession.

But Chinese experts said Xi would not have sabotaged the meeting, given China’s deep interest in reducing tensions on the peninsula.

“If the summit is canceled, China is the one that faces great increase of uncertainty,” said Shi Yinhong, an international relations expert at Renmin University in Beijing who has advised the government on diplomatic issues.

“A return by Trump to maximum pressure and military and economic threat brings a significant problem” for China.

Meanwhile, Trump also cast uncertainty over progress in trade talks, saying Wednesday that Washington would seek a new “structure” for the deal and a new direction for talks with Beijing, days after the two had taken conciliatory stances.

“China does not link trade and North Korea because that will make things more complicated,” said Ruan Zongze, a former diplomat now with the China Institute of International Studies, a think tank linked to China’s foreign ministry.

Some analysts had suggested, however, that China was using its leverage on North Korea, and Trump’s perceived desire for a successful summit with Kim, to blunt the sharpest edges of U.S. trade threats.

Tu Xinquan, dean of the China Institute for WTO Studies at the University of International Business and Economics in Beijing, said the summit’s collapse added to uncertainty in U.S.-China trade relations.

“Even before this announcement, Trump’s attitude on trade with China had changed a bit,” he said. “I am a little pessimistic about this trade deal.”

A souring of relations could see a tougher line from Washington on other issues deemed sensitive in Beijing, analysts say.

This week, the United States uninvited China from a major U.S. naval drill in response to what it sees as Beijing’s militarization of the disputed South China Sea, drawing a sharp response from China.

Disagreements have also flared over what China calls its most sensitive political issue, its claim on Taiwan, after Trump in March signed legislation encouraging U.S. officials to visit Taiwan to meet their Taiwanese counterparts.

Taiwan’s diplomatic isolation has grown, however, as Burkina Faso on Thursday cut official ties with Taipei. It was the second nation to do so in a month, dropping the number of Taiwan’s formal allies to 18.