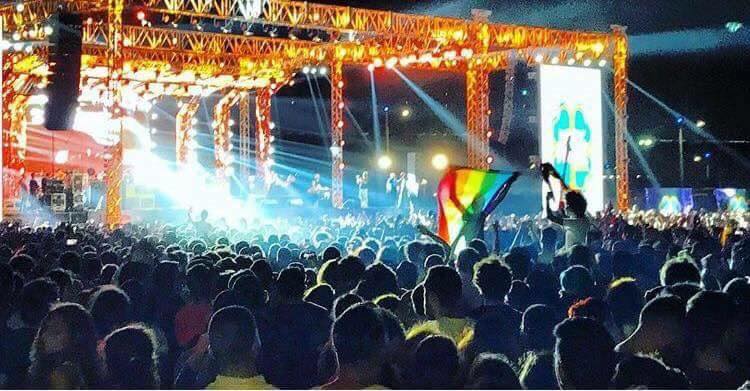 The rainbow flag raised during Friday’s concert featuring Lebanese Indie rock band Mashrou Leila has stirred heated debate on social media, inspiring hope for some and the signalling of a larger space for freedom of expression in Egypt.

Mashrou Leila, and Hamed Sinno (the band’s male lead) in particular, are no strangers to being seen as “controversial” for their views as their lyrics regularly discuss issues like homophobia, sexism, politics, religion, social justice, and sexual freedom.

While the band has many loyal fans around the world, they receive great backlash for speaking about such taboo subjects and challenge the status quo. The controversy resurfaced last weekend when a couple of rainbow flags were seen flying during their performances, rousing disagreements on LGBT rights in Egypt.

“I think this dispute shows how the LGBT community is growing stronger and more open, and at the same time it shows the amount of anger towards them, and lack of their acceptance in the community,” Nada Ismail, 24, said.

For Nermeen Ibrahim, staying silent on what she views as a sin is intolerable.

“If I accept this act, it means I support or agree with what they are doing, which I don’t because the LGBT case in Islam is nonnegotiable. I can’t watch someone doing something wrong and say it’s not my problem,” she said.

Sara Ayman, 23, moreover believes that the issue lies way beyond “the raise of the flag.”

“This is a flag that declares clearly the agreement and acceptance of something that caused a whole nation back in time to be doomed. I can’t see people repeating history and not speak up against it,” she said.

Donia El Maghraby, 22, however, attended the concert and felt happy that people have a safe venue to express themselves and feel proud of who they are.

“People are neither obligated nor expected to abide by what (other people) think is moral and right. Egypt has a long way to go before it starts conceding personal freedoms, but the least we can do is not make a fuss if a few people (in a very limited instance) decide to declare they’re simply different,” she said.

Salma El Saeed shared Donia’s views, adding that people took to social media right away expressing their disturbance because it’s one of the first places where the LGBT community has made its presence known.

“People are in denial that LGBT exists in Egypt. Everybody needs to realize that they were only able to do that at this concert specifically because they felt it would be a safe space,” Salma added.

Egyptian woman comes out as lesbian in video, conservatism and LGBT rights in Egypt collide

Last year,  Hamed took to social media to give a shout out to one of the fans at the show who came with a rainbow flag and raised it during their set. He stressed on how proud he was and how much courage it must have took for that person to do such thing in Cairo.

Mai* views Mashrou’ Leila as one of her main advocates in the region.

“Being lesbian in Egypt is not something I can freely be. I believe this was the perfect chance for the LGBT community to say ‘we are here, we have rights,’ without jeopardizing our own safety,” she said.

“I really don’t get why people are so hateful towards what they are not,” she added. “We are not harming anyone, I really think the majority is harming us. They make us live in fear.”

Homosexuality is not illegal in Egypt. But in the late 1990s, the police stepped up the use of two old laws – a 1950 anti-prostitution law and a 1961 law against “debauchery” – to arrest and charge the practising LGBT community. The highest-profile action was a raid in Cairo in 2001 on the Queen Boat, a gay-friendly club on the Nile, where 52 men were arrested.

Omar AbdelSattar, 24, was also in the concert, and he agrees that this concert in particular was an opportunity for the LGBT community to be themselves without “getting into any trouble.”

“The downside (of the raise of the flag) is that this might open the eyes of the state enough to do more violent than usual crackdowns and go as far as banning Leila and any other bands that are known supporters of the cause,” he said.

Mashrou’ Leila were recently banned from performing in Jordan. Hamed previously pointed the finger at “the fanatical conservatism that has contributed in making the region increasingly toxic over the last decade.”

*Name has been changed to protect the source’s identity.