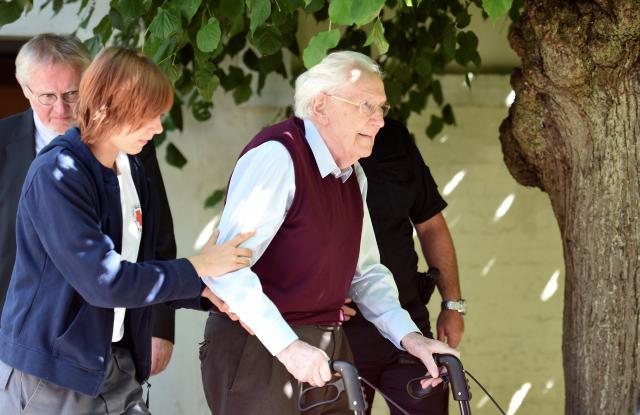 Germany’s constitutional court has ruled that a 96-year-old German must go to jail over his role in mass murders committed at the Nazi death camp at Auschwitz during World War Two, refusing to overturn a lower court ruling.

Oskar Groening, known as the “bookkeeper of Auschwitz” for his job counting cash taken from the camp’s victims, was sentenced to four years’ jail in 2015, but wrangling over his health and age have delayed the start of his sentence.

The constitutional court rejected the argument by Groening’s lawyers that imprisonment at his advanced age would violate his right to life, adding that the gravity of his crimes meant there was a particular need for him to be seen to be punished.

“The plaintiff has been found guilty of being accessory to murder in 300,000 related cases, meaning there is a particular importance to carrying out the sentence the state has demanded,” the judges wrote, upholding the Celle regional court’s ruling.

There is no further appeal to the constitutional court’s ruling. The ruling does leave open the possibility that Groening could be released if his health deteriorates.

In a 2015 court battle seen as one of the last major Holocaust trials, prosecutors said although Groening did not kill anyone himself while working at Auschwitz, in Nazi-occupied Poland, he helped support the regime responsible for mass murder by sorting bank notes seized from trainloads of arriving Jews.

Groening, who admitted he was morally guilty, said he was an enthusiastic Nazi when he was sent to work at Auschwitz in 1942, at the age of 21.

He came to attention in 2005 after giving interviews about his work in the camp in an attempt to persuade Holocaust deniers that the genocide had taken place.

Some 6 million Jews were murdered during the Holocaust carried out under Adolf Hitler.

CNN: The man who takes vacations in war zones