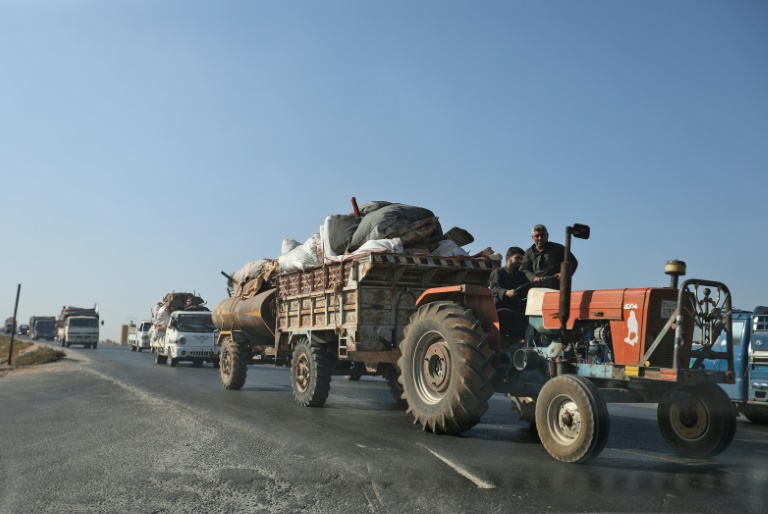 Damascus said Thursday it is opening a corridor for civilians to leave the opposition-held northwestern region of Idlib, where government bombardment has killed hundreds since late April.

The announcement came a day after government forces recaptured the strategic Idlib province town of Khan Sheikhun from jihadists and allied rebels.

Damascus has opened such corridors out of rebel bastions in the past as a prelude to retaking them either by force or through negotiated surrenders.

The Idlib region, which sits on the Turkish border, is now the last major stronghold of opposition to the Russia-backed government of President Bashar al-Assad.

It has been ruled since January by the Hayat Tahrir al-Sham alliance, which is led by jihadists from Syria’s former Al-Qaeda affiliate.

“The Syrian government announces the opening of a humanitarian corridor in Souran in the northern countryside of Hama province,” state news agency SANA quoted a foreign ministry source as saying.

The corridor will be used to evacuate “civilians who want to leave areas controlled by terrorists in northern Hama and the southern countryside of Idlib”, it added.

The government said it would provide shelter, food and medical care for civilians who chose to leave the region.

Civilians are often fearful about taking up government offers of refuge or safe passage for fear of arrest or conscription into the government’s depleted armed forces.

Wednesday’s advance saw government forces cut off a pocket of territory stretching from the south of Idlib province into neighbouring Hama, the Syrian Observatory for Human Rights said.

The pocket includes the town of Morek and the nearby areas of Kfar Zita and Latamneh.

The planned corridor will allow their remaining residents to escape into government-held territory, the Britain-based monitor said.

But most civilians had already fled before the pocket was cut off, Observatory head Rami Abdul Rahman told AFP.

AFP/File / Abdulaziz KETAZ A Turkish military convoy heads south towards the Idlib province town of Khan Sheikun, reportedly in an abortive bid to prevent its troops being cut off by advancing Syrian government forces, as civilians flee the bombardment

The encirclement of Morek has raised the stakes between the Russian-backed government and Turkey, which has troops manning an observation post in the town.

“But this latest advance has shown that they can simply advance around Turkish positions if they choose, reducing those Turkish observer forces to irrelevance.”

The Observatory said that regime war planes launched air raids on an area 300 metres away from the observation point in the village of al-Surman.

Turkish President Recep Tayyip Erdogan will discuss the situation in Idlib with his Russian and Iranian counterparts during a summit in Ankara on September 16, presidential spokesman Ibrahim Kalin said late Wednesday.

Russian foreign ministry spokeswoman Maria Zakharova on Thursday said that Moscow is continuing to collaborate with Turkey on Syria.

The Idlib region of some three million people was supposed to be protected by a proposed buffer zone agreed by Moscow and rebel backer Ankara last September.

But HTS failed to pull back from the zone as agreed, and in April government and Russian forces resumed intense bombardment of the region.

AFP/File / Omar HAJ KADOUR The strategic northwestern town of Khan Sheikun, which Syrian government forces entered on Wednesday, had ben heavily damaged by air strikes and shelling and the great majority of its residents had already fled

Nearly 900 civilians have been killed since late April, according to the Observatory.

More than 400,000 more have fled their homes, the United Nations says.

On Thursday, government warplanes struck villages east of Maarat al-Numan, another key town on the Damascus-Aleppo highway, the Observatory said.

The goal of the bombardment is to force civilians to flee ahead of a push towards the rebel-held town, it added.

Abu Hussein fled his village outside Maarat al-Numan earlier this week, after heavy bombardment by Damascus and its Russian ally.

“Towns and villages are now empty of their residents,” he told AFP.

“There is no life here, you don’t see anything except warplanes launching strikes or helicopters dropping barrel bombs.”

The war in Syria has killed more than 370,000 people since it started with the brutal suppression of anti-government protests in 2011.

Rival interventions by outside powers have turned it into a complex conflict, with multiple battlefronts that have driven millions of civilians from their homes.