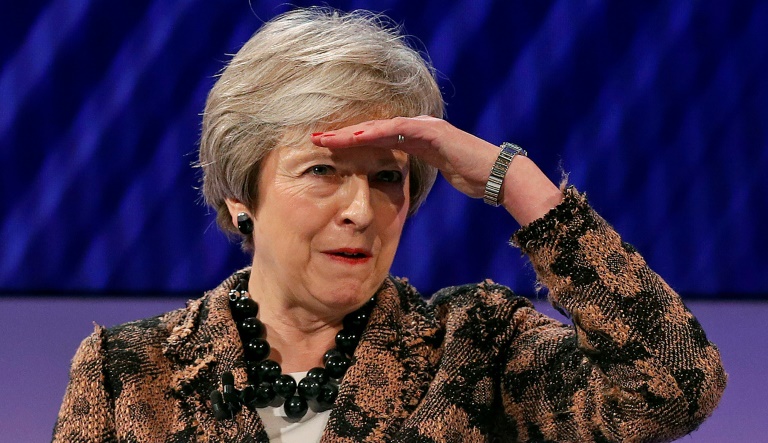 Theresa May will briefly escape the Westminster bear pit to bring her Brexit battle to Brussels on Wednesday, just four days before the divorce deal is to be signed.

After enduring another parliamentary grilling at prime minister’s questions in London, the British leader will cross the Channel to visit EU Commission president Jean-Claude Juncker.

Having seen off — at least for now — a potential leadership challenge by hardline Brexiteers in her own party, she now hopes to wring out of Brussels a Brexit arrangement that she can sell to her parliament.

The withdrawal treaty itself is all but final, and preparations are under way for a summit on Sunday to sign it, but there remains the matter of a parallel 20-page political declaration on future EU-UK ties.

European diplomats and EU officials have been in intense talks on the political declaration this week. One of them told AFP that they now expect to publish it on Thursday morning, after May’s afternoon tea talks with Juncker.

Neither side has much wiggle room left to polish the text, but May must show that she has left nothing on the table if she is to convince British members of parliament to ratify the deal in the coming weeks.

May faces pressure from her Northern Irish allies, who oppose a deal they say weakens British sovereignty in their province, and from Spain, which warned it might oppose the accord over the issue of Gibraltar.

Two of May’s top ministers quit last week, including her Brexit secretary, while MPs from all parties came out against it — increasing the chances that Britain will crash out of the Union on March 29 without an agreement.

A minister who opposed Brexit and who returned to May’s cabinet in a reshuffle triggered by the resignations, tried to rule out this economically disruptive scenario Wednesday in a BBC radio interview.

Rudd argued that parliament should back May’s exit deal to restore certainty ahead of the March 29 deadline, but other MPs from both May’s Conservatives and the opposition are lobbying for a second referendum to perhaps reverse Brexit.

Officials are now racing to agree the accompanying outline statement on the future trading and security relationship for after Britain leaves the EU’s single market and customs union in March.

Opposition to the agreement is also building in the pro-Brexit camp.

On Monday, MPs from Northern Ireland’s Democratic Unionist Party (DUP) abstained on three budget votes in the Commons and voted against a fourth, in apparent defiance of their deal to back the government on finance matters.

Anti-Europe Conservatives have also savaged the divorce deal, which they say keeps Britain too close to the EU.

Rebels led by MP Jacob Rees-Mogg failed in their attempt to force an immediate confidence vote in May’s leadership, but warned they would keep trying.

The withdrawal agreement sets out plans for a 21-month transition after Brexit, in which Britain and the EU want to turn their outline agreement on the future relationship into a full trade deal.

But controversially, it says that if that deal is not agreed in time, Britain will adopt a “backstop” arrangement to keep open its land border with Ireland.

This would keep all of Britain in the EU’s customs union, and Northern Ireland also in parts of the single market.