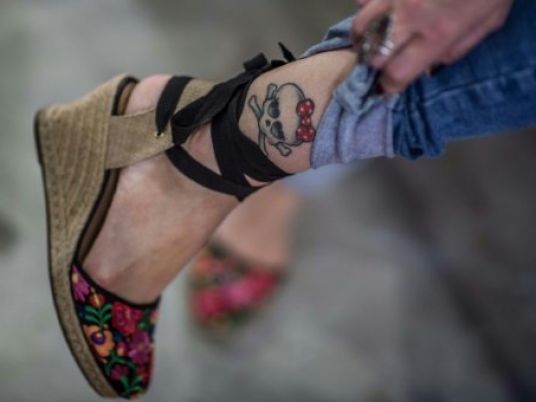 In their quest for beauty, Brazilian tattoo fans are turning to the most unlikely of pretty faces: the death skull.
At Rio Tattoo Week 2016, billed as Latin America's biggest piercing and tattoo convention, the image of death stared from arms, legs, necks, and most other body parts, not to mention T-shirts and posters.
Plenty of other designs featured at the three-day bash.
Disney cartoon characters, Viking warriors, Japanese geishas, roses, vines, and entire gardens were on show at the Rio convention center. Even old-fashioned Popeye anchors.
But inky death in various guises — grinning, grimacing, winking — was inescapable.
"It has become the fashion," said Priscila Virla, 32, co-owner of Lady Luck, a tattoo studio which caters especially to women and which had one of the 250 convention stands. "The skull is one of those things that has really caught on, especially here in Rio de Janeiro."
Some of the depictions of death carried in tattoo catalogues showed skulls horribly disfigured, screaming or dripping in blood.
But despite initial appearances, this attachment to skull images has surprisingly wholesome roots.
"For Brazilians the skull represents equality," said Binho Fernandes, whose Thug Nine clothing and accessories line is big on all things skull-related. "People tattoo skulls because the skull unites us all."
Nelio Cadar, whose Radac studio uses a highly stylized skull as its logo and who also sports a big skull tattoo on his right arm, echoed that thought.
"We take the beautiful side of the symbol. It's less about death than equality," he said. "Whether you have a lot of money or no money, whether you are Catholic or some other religion — when we all die we all have a skull."
Mexican takeaway
The skull obsession originates from Mexico's cultish Day of the Dead celebrations, tattoo experts at the convention said.
There, the Aztec god of death was transformed by popular culture into a dark folk saint called Santa Muerte favored today by "criminals and the police," said Federico Ruiz, an artist who'd come to Rio from Mexico City to sell his works.
Artistically related to Santa Muerte is another Mexican skeleton woman, Catrina, now a major inspiration for tattoo aficionados internationally, although with an especially lively following in Brazil.
"It's something Brazil took as its own," Cadar said. "We've made it cool."
A detailed skull tattoo covering a good portion of the arm costs about 1,200 reais (US$293), a hefty sum in recession-hit Brazil. But there is no shortage of clients.
Appetite for tattoos is so great in Rio that vendors quizzed by AFP seemed to agree that they remain protected for now against the country's economic crisis.
The potentially gloomy aspect of being emblazoned with a death symbol doesn't deter much either.
"Once you have a certain amount of tattoos you stop caring so much about what they mean," said Lorena Lima, 21, who bore a large Catrina tattoo — this one with fierce eyes and a stitched-up mouth — on her right arm.
"You just have them because they're beautiful," she added, wincing as an artist worked on tattoo number 10, a woman with a serpent's tongue.
Anyway, skulls don't even have to be scary, pointed out Virla at the women-friendly studio.
"See?" she said, pulling up a trouser leg to reveal a small skull with a playful red and white polka-dot hair bow. "It all depends on your perspective."