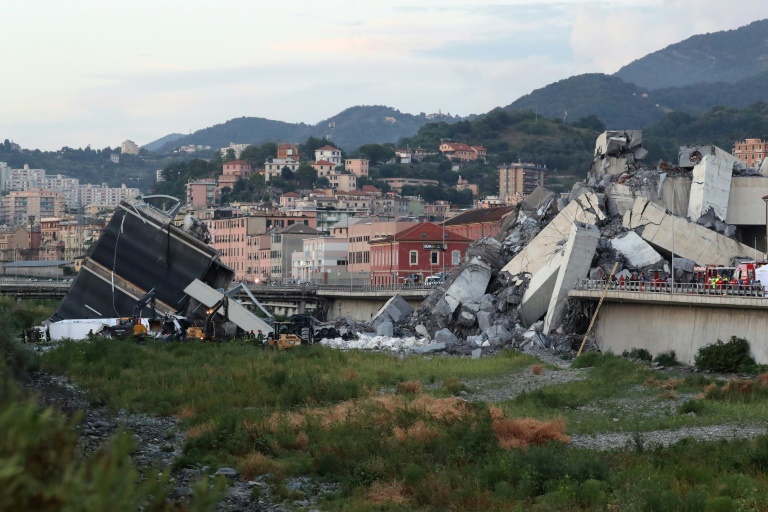 A frantic search was underway Wednesday for survivors under the shattered remains of a motorway bridge in Genoa as the death toll rose to 35 and investigators probed what caused the catastrophic collapse.

A vast span of the Morandi bridge caved in during a heavy rainstorm in the northern port city on Tuesday, sending about 35 cars and several trucks plunging 45 metres (150 feet) onto the railway tracks below.

“Unfortunately the toll has risen to 35 in the Genoa tragedy, including three children aged eight, 12 and 13 years old,” Interior Minister Matteo Salvini said, praising firefighters who worked tirelessly through the night.

“All accessible spaces have been explored, now we are moving the largest pieces of debris,” Gissi said, adding that two large cranes were being brought to the site to assist the operation.

“We cannot know if there are survivors remaining, but it’s our job to search,” he said, adding that the rescue operation would take days.

Sources in the interior ministry told Italian media that 16 people were wounded, including 12 in serious condition.

The collapse came as the bridge was undergoing maintenance work and as the Liguria region, where Genoa is situated, experienced torrential rainfall.

Italian President Sergio Mattarella said a “catastrophe” had hit Genoa and the whole of Italy.

“Italians have the right to modern and efficient infrastructure that accompanies them safely through their everyday lives,” Mattarella said in a statement.

‘I went down with the car’

Rescuers scoured through the wreckage, strewn among shrubland and train tracks, as rescue helicopters winched survivors on stretchers from the ruined bridge.

Between firefighters police and other emergency service, around a thousand people have been mobilised in the rescue effort, according to the Civil Protection service.

As cars and trucks tumbled off the bridge, Afifi Idriss, 39, a Moroccan lorry driver, just managed to come to a halt in time.

“I saw the green lorry in front of me stop and then reverse so I stopped too, locked the truck and ran,” he told AFP.

Others that plunged down with the bridge managed to escape unscathed, including a former goalkeeper for Italian Serie A club Cagliari.

“I was driving along the bridge, and at a certain point I saw the road in front of me collapse, and I went down with the car,” Davide Capello told TV news channel Sky TG24.

The incident — the deadliest of its kind in Europe since 2001 — is the latest in a string of bridge collapses in Italy, a country prone to damage from seismic activity but where infrastructure generally is showing the effects of a faltering economy.

Salvini, who is co-deputy prime minister and leader of the nationalist League party in the new coalition government, vowed to hold those responsible for the disaster accountable.

“I have gone over this bridge hundreds of times, and I commit to digging and finding out who is responsible for an unacceptable tragedy, because it’s not possible that in 2018 you can work and die in these conditions,” he said.

Italy’s other deputy prime minister, Five Star Movement leader Luigi Di Maio, is expected to arrive at the scene on Wednesday morning, with Salvini to follow in the afternoon.

The national motorways body said on its website that “maintenance works were being carried out on the base of the viaduct”, adding that a crane had been moved on site to assist the work.

Genoa, home to half a million people, is located between the sea and the mountains of northwestern Italy.

Its rugged terrain means that motorways that run through the city and the surrounding area are characterised by long viaducts and tunnels.

The Morandi viaduct, completed in 1967, spans dozens of railway lines as well as an industrial zone with several factories.

One factory, immediately next to one of the viaduct’s support columns, was virtually empty on Tuesday on the eve of a national holiday, and seems to have sustained minimal damage.

“I live nearby and I cross the bridge every day on foot,” said Ibou Toure, 23, a translator. “I was never sure of it, you’d always hear these noises whenever lorries were going over.

“When I heard it had collapsed, I wasn’t surprised.”

In March last year, a couple were killed when a motorway overpass collapsed on their car near Ancona on the country’s Adriatic coast.

A pensioner died in October 2016 when his car was crushed by a collapsing bridge over a dual carriageway between Milan and Lecco.

That incident was blamed on bureaucratic bungling which led to a fatal delay in the bridge being closed after it was reported to be showing significant cracks.