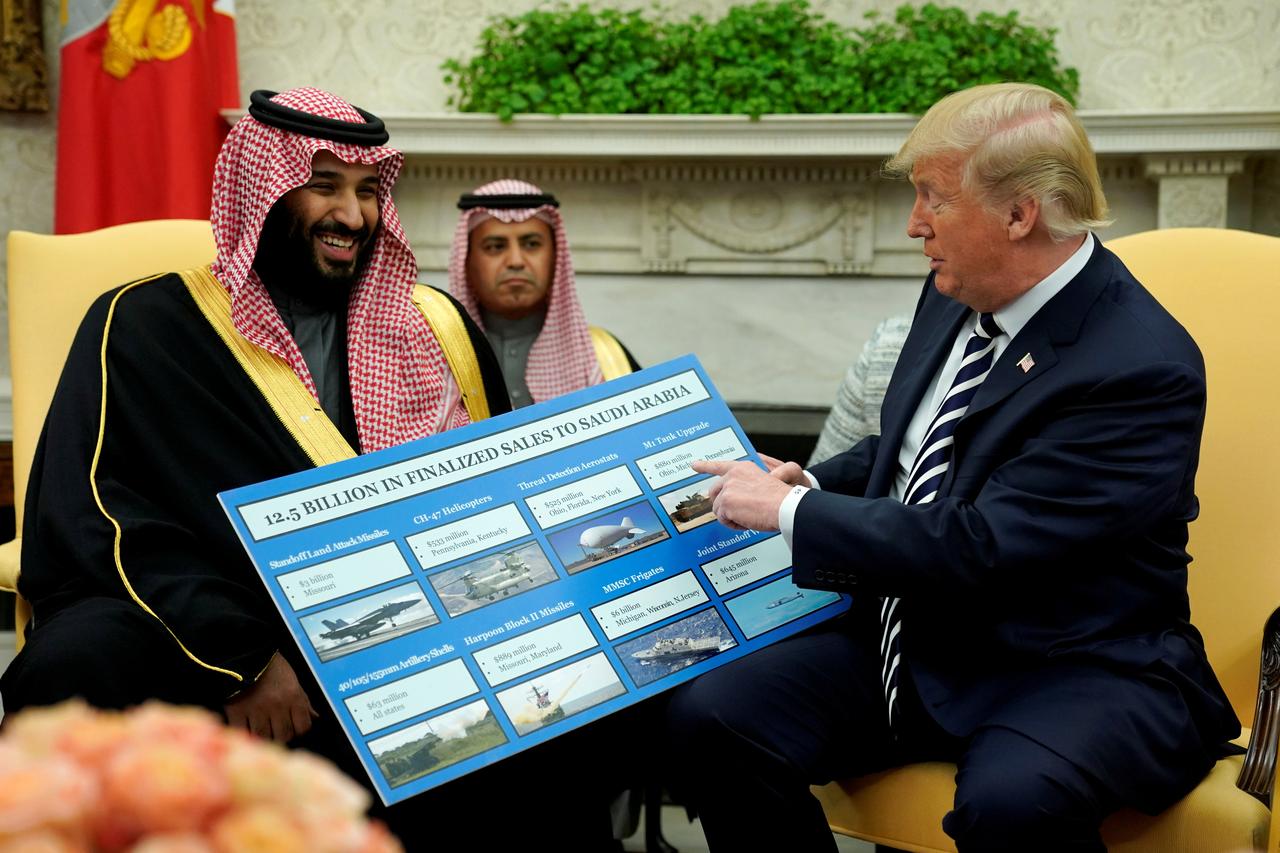 WASHINGTON (Reuters) – US President Donald Trump, declaring a national emergency because of tensions with Iran, swept aside objections from Congress on Friday to complete the sale of over US$8 billion worth of weapons to Saudi Arabia, the United Arab Emirates and Jordan.

The Trump administration informed congressional committees that it will go ahead with 22 military sales to the Saudis, United Arab Emirates and Jordan, infuriating lawmakers by circumventing a long-standing precedent for congressional review of major weapons sales.

Members of Congress had been blocking sales of offensive military equipment to Saudi Arabia and the United Arab Emirates for months, angry about the huge civilian toll from their air campaign in Yemen, as well as human rights abuses such as the murder of Saudi journalist Jamal Khashoggi at a Saudi consulate in Turkey.

Lawmakers and congressional aides warned earlier this week that Trump, frustrated with Congress holding up weapons deals including the sale of bombs to Saudi Arabia, was considering using a loophole in arms control law to go ahead by declaring a national emergency.

“President Trump is only using this loophole because he knows Congress would disapprove … There is no new ‘emergency’ reason to sell bombs to the Saudis to drop in Yemen, and doing so only perpetuates the humanitarian crisis there,” said Senator Chris Murphy.

Murphy, a Democrat, made public on Twitter on Wednesday that Trump was considering the loophole in the Arms Control Export Act to clear the sales.

Several of Trump’s fellow Republicans, as well as Democrats, said they would object to such a plan, fearing that blowing through the “holds” process would eliminate Congress’ ability to check not just Trump but future presidents from selling weapons where they liked.

Representative Mike McCaul, the top Republican on the House of Representatives Foreign Affairs Committee, said the administration’s action was “unfortunate” and likely to damage future White House interactions with Congress.

“I would have strongly preferred for the administration to utilize the long-established and codified arms sale review process,” McCaul said in a statement.

US Secretary of State Mike Pompeo said in a statement that US partners in the Middle East needed the contracts to be completed to help deter Iran, and that the decision to circumvent Congress was meant to be a “one-time event.”

It is not the first time Congress and Trump have clashed over policy in the region, or the division of powers between the White House and Capitol Hill. The House and Senate voted to end US military support for the campaign in Yemen earlier this year, but Trump vetoed the resolution.

BOON TO DEFENSE INDUSTRYIn documents sent to Congress, Pompeo listed a wide range of products and services that would be provided to the countries.

They include Raytheon precision-guided munitions (PGMs), support for Boeing Co F-15 aircraft, and Javelin anti-tank missiles, which are made by Raytheon and Lockheed Martin Corp.

Other companies that will benefit include General Electric, now cleared to sell engines for use in F-16 fighter jets operated by the UAE and the US unit of French firm Thales, which was cleared to sell a fuzing system for Paveway IV precision guided bombs to Britain and the UAE.

It will also likely be welcome news for Britain’s BAE Systems Plc and Europe’s Airbus, clearing the way for installation of Paveway laser-guided bombs on European-built Eurofighter and Tornado fighter jets sold to Saudi Arabia, as well F-15 fighters built by Boeing.

“I am disappointed, but not surprised, that the Trump Administration has failed once again to prioritize our long-term national security interests or stand up for human rights, and instead is granting favors to authoritarian countries like Saudi Arabia,” Senator Bob Menendez said in a statement.

Menendez, ranking Democrat on the Senate Foreign Relations Committee, vowed to fight the action, and said he was in talks with both Democrats and some of Trump’s fellow Republicans on ways to preserve congressional review of arms sales.

In a statement, Risch said, “I am reviewing and analyzing the legal justification for this action and the associated implications.”

In his memorandum justifying the emergency declaration, Pompeo listed years of actions by Iran. “Iranian malign activity poses a fundamental threat to the stability of the Middle East and to American security at home and abroad,” he wrote, and cited “a number of troubling and escalatory indications and warnings” from Tehran.

Trump’s administration also announced that it was sending 1,500 additional troops to the Middle East, which it described as an effort to bolster defenses against Iran against what it sees as a threat of potential attack.

Members of Congress from both parties have worried that Trump is pushing toward war with Iran. Clarke Cooper, assistant secretary of state for political-military affairs, said the administration was responding to important needs from partners.

“This is about deterrence and it’s not about war,” he told Reuters in a telephone interview.

Trump’s Mideast deals tout ‘peace’ where there was never war