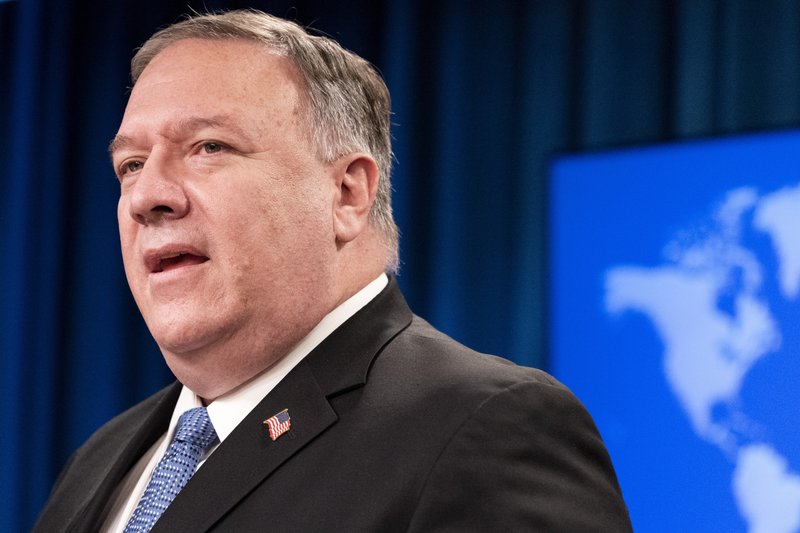 WASHINGTON (AP) — After refusing to acknowledge President Donald Trump’s loss in last week’s election, Secretary of State Mike Pompeo is leaving Friday on a trip to Europe and the Middle East, to countries where leaders have all congratulated former vice president Joe Biden for his victory.

The seven-nation trip is aimed at shoring up the outgoing Trump administration’s priorities, notably its anti-China and -Iran policies, and will include visits to Israeli settlements in the West Bank that have been avoided by previous secretaries of state.

But the usual foreign policy issues are likely to be overshadowed by the extraordinary moment in global politics: Most of the world has accepted the results of America’s election, while the United States’ top diplomat — as well as its president and much of his Republican Party — have not.

Pompeo’s trip comes days after he raised eyebrows by dismissing a reporter’s question about the presidential transition by saying “there will be a smooth transition to a second Trump administration.” He appeared to be speaking in jest and went on to say, in a more serious tone, that the world should be assured that the State Department will be functional and successful with the president who takes office Jan. 20. But those comments and subsequent statements in interviews with conservative media did not acknowledge that it’s Biden who will become president then.

Pompeo’s weeklong tour takes him to France, Turkey, Georgia, Israel, the United Arab Emirates, Qatar and Saudi Arabia. The leaders of each of those countries have offered public congratulations to Biden.

Four of those countries — France, Turkey, Georgia and Qatar — have had a fractious relationship with the Trump administration and it was not clear if Pompeo would hold public engagements with any of their leaders. Pompeo has had a notoriously frosty relationship with the press and it was also unclear if he planned to take questions from reporters.

In keeping with Trump’s refusal to concede and orders for Cabinet agencies not to cooperate with the Biden transition team, the State Department has not been involved with facilitating Biden’s calls to foreign leaders, according to officials familiar with the process.

Pompeo’s ardent support for Trump, who has claimed without evidence that the election was beset by fraud, threatens to hurt America’s standing in making pronouncements about other countries’ democratic shortcomings.

On Thursday, Pompeo weighed in on Hong Kong’s legislature, and he has in recent weeks denounced alleged electoral problems in Belarus, Tanzania and Ivory Coast.

Yet, at his news conference Tuesday, Pompeo roundly dismissed a question about whether Trump’s unfounded protests have created problems for US credibility. “You asked a question that is ridiculous,” he responded. “This department cares deeply to make sure that elections around the world are safe and secure and free and fair, and my officers risk their lives to ensure that that happens.”

Biden has already spoken with the leaders of Australia, Canada, Japan and South Korea and fielded congratulatory notes on social media and elsewhere from others.

Yet, Pompeo said he would carry on as if there was no change.

FILE – In this November 10, 2020, file photo Secretary of State Mike Pompeo speaks during media briefing at the State Department in Washington. After refusing to acknowledge President Donald Trump’s loss in last week’s election, Pompeo is heading overseas on a trip to Europe and the Middle East where leaders have all congratulated former vice president Joe Biden for his victory. (AP Photo/Jacquelyn Martin, Pool, File)