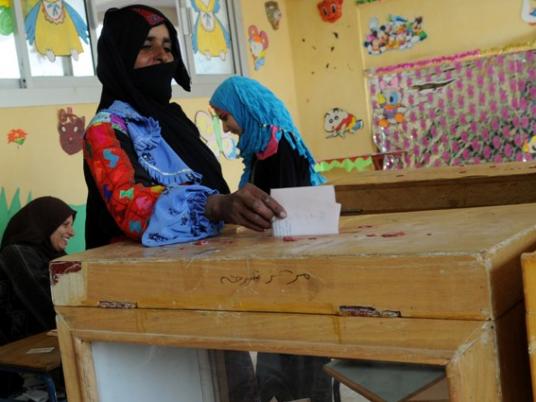 The police station at the border town of Rafah has not been renovated, unlike the police stations in Arish and Sheikh Zowayed. It still shows the damage from the events of 28 January, when longstanding grievances erupted into battles between security forces and residents of North Sinai during the nationwide January uprising.

A large portion of the wall is still missing, and the building remains desolate, its insides withered, almost a year after it was the site of intense fighting. Nearly 12 months later, and with parliamentary elections having taken place, North Sinai remains an area with an immense security presence, and more importantly, a security mindset. And, in addition to the ubiquitous police presence, much of the governorate is now festooned with military personnel.

For years, residents of North Sinai have bitterly complained about their treatment at the hands of security forces in the area, who view them with suspicion. Tensions between the two sides are inevitably heightened by the proximity of the Gaza and Israel borders, the smuggling tunnels, and the bombings in Dahab, Taba and Sharm El-Sheikh in 2004 and 2005. Bedouins state that they are considered second-class citizens and a potential fifth column, often accused of involvement in terrorist groups, linked either to Palestinian resistance groups or al-Qaeda.

The specific geographical factors that make North Sinai something of a special case only serve to magnify the security-first and regime-first attitude that has long ruled — and continues to rule — in Egypt as a whole. For the residents of Sinai, this collusion of factors has meant a dreary history of detentions, trials in absentia, a lack of land ownership in the area and a general paucity in economic development and employment opportunities.

Superficially, the recent parliamentary elections would seem to have ushered in a new era of openness and democracy. However, political figures and activists from the area suggest this is not the case. Rather, they say, the situation remains essentially unchanged, and continues to reflect the authoritarian style of rule still in evidence across the country as a whole, albeit compounded by local factors.

“Nothing has changed regarding North Sinai after the fall of the previous regime,” says Shura Council candidate for the Wafd party in Sheikh Zowayed Mohamed al-Menei.

Tribalism and the state

North Sinai is an area of tribes and clans, chief amongst them the Tarabin, Sawarkeh, Reyashat, Fawakhreya and the Sons of Suleiman. The tribal nature of the area is a fact that security forces have taken into account in devising strategies for controlling dissent within the local population.

The main security agency operating in the area in recent years has been the State Security Investigations Service (SSIS), now re-named the National Security Agency. The SSIS has long worked to co-opt tribal elders, who they continue to appoint to this day, taking the process away from the internal functions of the tribes themselves. These “sheikhs” are given a state salary and are considered government employees. Calls to dissolve the system since January 25 have fallen on deaf ears.

In the wake of the Taba and Dahab bombings, security forces conducted huge raids on local residents, arresting thousands and sentencing those they couldn’t find. Such heavy-handed tactics have aggravated existing tensions between central authority and the local population.

In August of 2011, six months after President Hosni Mubarak stepped down, the military council launched a massive military and police operation in Sinai ostensibly aimed at cracking down on Jihadist groups and armed gangs said to be active in the peninsula since the uprising. Operation Eagle involved the deployment of a large military force, including armored vehicles, the first such military deployment since the Camp David agreement with Israel was signed in 1979.

Since August last year, local residents have lived among armored vehicles and troops positioned behind sandbag barriers. While the operation claimed several successes in capturing insurgents, it also served to stoke existing tensions between residents and the armed forces.

Many residents of North Sinai claim that they are not permitted to serve in the military, saying they are often turned away for spurious reasons, a fact that only adds to the perception that the state views them as untrustworthy.

Development on the back-burner

Further compounding the sense of distrust is a general perception that central government has failed to offer any effective initiatives for economic development and employment, while locals claim their rights to land ownership have been consistently ignored or abused.

“There have been massive failures in the development of Sinai,” says Revolution Youth Coalition member Saeed Ataik, “and because it is inextricably linked to the Arab-Israeli conflict, things here will not be resolved until there is a settlement in that.”

Prime Minister Kamal Ganzouri recently announced his government’s intention to implement a development a plan for Sinai. However, Ataik dismissed Ganzouri and his mooted project, saying when he was prime minister in the 1990s, he was given the option of investing in Sinai, but chose instead to put his energy behind the Toshka land-reclamation project, which eventually failed to live up to expectations.

Ataik goes further, contending that the security policies in the region have served to hinder economic development.

“The security apparatus was the main reason for the economic and security decline in Sinai, and this remains the case today. The negative role of the appointed tribal sheikhs also continues, with their loyalties being to the state and not their people,” he says.

“The divide-and-rule approach created a general sense of instability here,” he continues. “We need tangible and real cooperation with the state here, because we are partners in this area, not hired hands.”

The lack of economic activity has led to high rates of youth unemployment, often forcing young graduates to travel outside the area in search of work. Among those affected is 24-year-old Tarek Dahshan, a recent graduate of a technical institute for maritime construction. On a recent trip to apply for a job in Arish, he was directed to the authorities in Port Said. However, on arrival in Port Said, he was turned away once again, and has so far not heard back from the port authorities.

“When I was there, they asked me what I was doing looking for work in Port Said. They said that all the jobs should go to people from Port Said,” says Dahshan.

Wafd Party parliamentary candidate Radwan Salman summarizes the situation: “There have been 30 years of accumulated grievances, leading up to the revolution. Sinai was being bought and sold, but the revolution was much bigger than Sinai. Thugs defended the regime here, and the area was never economically developed. People here were marginalized and considered second-class citizens. You can’t own land and you are prohibited from certain jobs. They isolated the best of us and elevated the worst.”

With so much discontent still in evidence among the residents of North Sinai, it is perhaps not surprising that the recent parliamentary elections are seen by some as a side-show.

North Sinai will have six seats in the People’s Assembly. However, Ataik believes that these seats are not sufficient to guarantee significant clout in Cairo when it comes to resolving the area’s longstanding problems. More important, he feels, is to concentrate on writing a constitution that will guarantee rights to all Egyptian citizens.

“It is through the constitution that change can be brought about. We are Egyptians, and we must be identified as such in the constitution, not as second-class citizens or traitors,” he says.

For this reason, Ataik has begun an initiative to lobby for a North Sinai representative to be included in the constituent assembly that will draft Egypt’s new constitution later in the year.

According to some locals, the continuation of a security-first policy in the governorate might bring with it certain dangers, including the potential for increased militancy among the young.

Hassan Hantoosh, a Sheikh Zowayed resident, says, “The youth are finding it hard to find legal means of work, and so it is not surprising that they will turn to smuggling and such things.

"However, the greater danger is that if the state continues to treat people here as traitors who are not Egyptians, then young people will eventually not feel any loyalty to the country. And for them, it would make no difference who assumes the role of the state.”