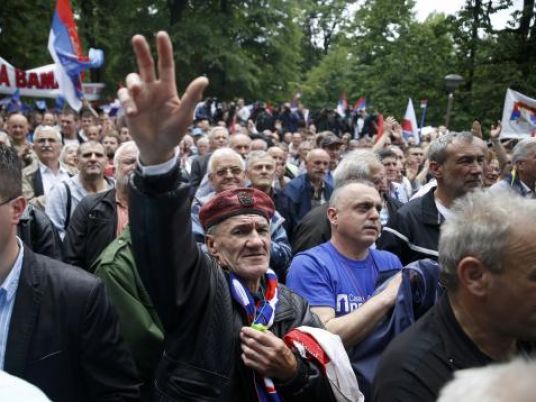 Thousands of Bosnian Serbs gathered for rival demonstrations for and against the government in the capital of Bosnia's autonomous Serb region on Saturday, kept apart by ranks of police after warnings of violence.

Police reinforcements and demonstrators' cars flying Serb Republic flags in support of the government streamed towards Banja Luka, where buses had already arrived with supporters of both factions.

Authorities banned both sides from marching through the city to avoid confrontations in the politically charged atmosphere in the build-up to local elections in October.

The opposition is protesting against what it sees as corruption and the poor state of the economy while the rival rally is a show of support for the government.

"I will go to support our president. He is a genuine Serb and only he knows how to preserve the Serb Republic," said Goran Keserovic, a Banja Luka resident.

"I am fed up with living like a dog. I was in a trench while they were enriching themselves," said Zivko Josic, an unemployed ex-soldier from the other camp. "I will support the opposition to change things for the better."

Worried that divisions among Serbs in Bosnia could cause instability in his own country, Serbian Prime Minister Aleksandar Vucic has urged Bosnian Serb political leaders to set aside their differences and prevent the protests from turning violent.

But police kept the demonstrators apart with metal barriers and city-centre cafes and shops were closed. The rallies ended peacefully.

Political tensions in the Serb Republic have risen since elections in 2014, when Dodik's ruling party lost its place in the Bosnian government to the Alliance for Change, a pro-Europe reformist group, and remained in control only of the Serb Republic government.

Dodik, who favours closer ties with Russia and has threatened to pull his region out of Bosnia's complex state structure, says officials who support a reform agenda designed to bring Bosnia closer to the European Union are traitors.

The opposition accuses Dodik of autocracy and corruption. He has been investigated for embezzlement and abuse of office but never charged.

Since coming to power with Western backing 10 years ago, Dodik has adopted nationalist policies aimed at increasing his region's autonomy and weakening state institutions by blocking laws in Bosnia's national parliament.

After Bosnia's 1992-95 war, the country was split into a Serb Republic and a Federation of Muslim Bosniaks and Catholic Croats, linked via weak central government.