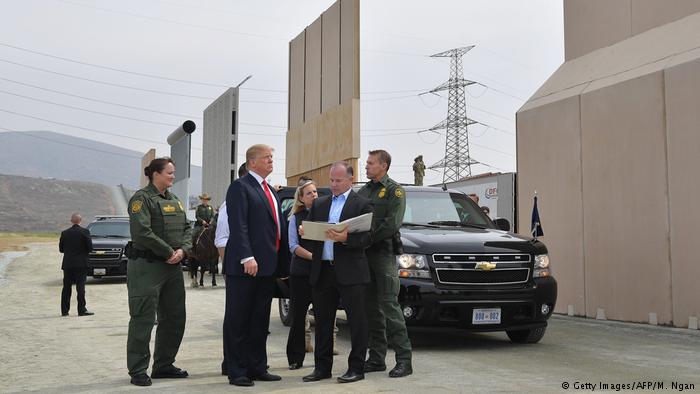 US President Donald Trump has ordered the deployment of National Guard troops to the Mexican border. Trump has said the situation at the southern border has “now reached a point of crisis.”

The White House said the move would tighten security at the southern border and help local officials combat drug crime and illegal immigration.

Trump said in a memorandum to Cabinet members that the “situation at the border has now reached a point of crisis.”

The document orders the US secretary of defense to support the Department of Homeland Security in securing the Mexican border and halting the flow of drugs and people. It also orders both agency heads to report back to the president within 30 days to outline what further security measures can be taken.

Trump said that “lawlessness” at the southern border was “fundamentally incompatible with the safety, security, and sovereignty of the American people.”

Homeland Security Secretary Kirstjen Nielsen told reporters earlier on Wednesday that National Guard troops would not be involved in enforcement but would support border officials until Trump’s promised wall is built.

“The president has directed that the Department of Defense and the Department of Homeland Security work together with our governors to deploy the National Guard to our southwest border to assist the Border Patrol,” Nielsen said.

She added that, despite steps taken by the Trump administration, the levels of drug smuggling, illegal immigration and gang activity on the US-Mexico border continued to be “unacceptable.”

Trump will still need congressional approval before National Guard troops make their way to the border, as federal law prohibits active-duty soldiers to be deployed inside the US without authorization from Congress.

According to White House officials, the administration has been seeking to warm congressional leaders to the idea for several weeks.

US presidents have twice deployed National Guard troops at the southern border in the past 12 years. Nielsen said the White House was considering a similar model to the 2006 order signed by President George W. Bush, which assigned some 6,000 troops to assist US Customs and Border Protection personnel.

The president has become increasingly frustrated by slow action on the southern border, particularly when it comes to building the wall.

“Until we can have a wall and proper security we’re going to be guarding our border with the military,” Trump told reporters said on Tuesday, scolding what he described as the “horrible” US laws that had left the border poorly protected.

The president last month grudgingly signed a spending bill that included only $1.6 billion (€1.3 billion) in funding for the border wall — a fraction of the $25 billion he had hoped to secure. That money can also only be used to fortify existing segments of the wall, rather than build new sections.

The president has broached using the Pentagon’s budget to finance the building of the wall, despite rules that prohibit spending that hasn’t been authorized by Congress. Trump has sought to bypass congressional approval, arguing that the border wall is a national security concern, albeit with no success of yet.

Channeling national pride, Mexican front-runner to campaign by US border