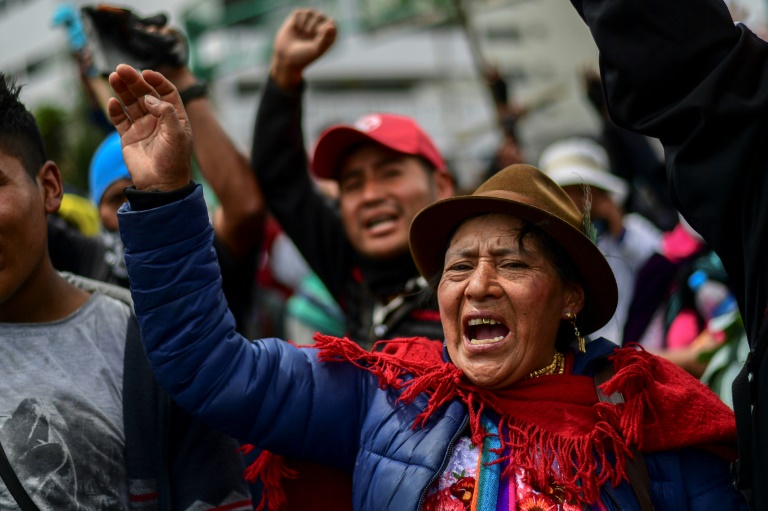 The call by Jaime Vargas, head of the indigenous umbrella organization CONAIE, flew in the face of efforts by President Lenin Moreno to resume dialogue after a week of protests which have disrupted the country’s oil output.

“No dialogue with a murderous government,” Vargas said in a statement after indigenous groups seized eight police officers during a tense standoff in Quito.

The officers, including a woman, were put on display before an angry crowd at Quito’s House of Culture which indigenous groups have occupied since arriving in the city last weekend.

Some indigenous men prodded and berated one of the officers, Captain Cristian Rueda, who appeared before the crowd wrapped in an Ecuadoran flag.

Moreno was hopeful of resolving the crisis. “Without a doubt, this is going to be solved very soon,” he told state television late Wednesday, following clashes between protesters and security forces in the heart of the capital.

Those clashes killed four civilians, including an indigenous leader, the ombudsman’s office announced Thursday, bringing the overall toll to five.

“We are calling on the national government to eradicate violence and guarantee the exercise of the right to social protest in a peaceful manner,” it said.

The first victim was hit by a vehicle on Sunday in the southern province of Azuay.

Protesters are demanding that Moreno reinstate fuel subsidies that were cut last week after $4.2 billion in loans was agreed with the IMF.

Ending the subsidies meant that fuel prices shot up by as much as 120 percent from October 3.

Facing the worst crisis of his presidency, Moreno moved the seat of government to the port city of Guayaquil on Monday as thousands of indigenous people descended on the capital from outlying Amazon basin and Andean areas.

Officials have already had some discussions with CONAIE leaders in Guayaquil, after mediation by the United Nations and Roman Catholic Church.

Guterres “recalls the right of peaceful assembly in accordance with international law and calls on all actors to reduce tensions, avoid acts of violence and exercise maximum restraint,” his office said.

Moreno has offered to free up resources for those hardest hit by the fuel hikes, and said on Wednesday there was some dialogue “with our brother indigenous peoples who unfortunately have needs.”

Ecuador’s indigenous groups make up a quarter of the country’s 17.3 million population.

Apart from the five dead, 122 people have been injured in the clashes, with 766 detained, according to the latest figures from the authorities and the Red Cross.

The unrest has threatened to inflict wider damage on an already weakened economy, with $12.8 million in lost oil production to date, according to the energy ministry.

Wednesday, it said it was shutting down one of the country’s two domestic oil pipelines, effectively suspending two-thirds of its distribution of crude.

Moreno, who still claims to be a socialist, has received unexpected support from the right and the army over the unrest.

In Guayaquil, a stronghold of the business community, thousands demonstrated Wednesday in support of the president.

“The measures are harsh, but they should have been done by the government of Rafael Correa. Now we must let the president continue,” said Geovanni Molina, a 68-year-old retiree.

Moreno has accused his predecessor and ex-ally Correa along with Venezuelan President Nicolas Maduro of an “attempted coup d’etat” using indigenous groups.

Interior Minister Maria Paula Romo added to the sense of siege on Thursday, announcing on Twitter the arrest of 17 people, mostly Venezuelans, at Quito airport.

Romo said the men had “information about the movements of the president and vice president.”

The arrests “confirm all the interests that are behind the chaos in this country,” she said.

Maduro, a leftist firebrand whom Washington is seeking to oust, has denounced allegations of involvement as absurd.

Moreno drew fresh support Thursday from neighbors Peru and Chile, after seven other Latin American countries — including Argentina, Brazil and Colombia — warned against any attempt by Maduro and his allies to “destabilize” Ecuador.