The Egyptian Cabinet’s Information and Decision Support Center (IDSC) obtained the “Committed to Excellence” certificate from the European Foundation for Quality Management (EFQM), becoming the first African and Egyptian governmental institution to receive the honor.

The certificate is awarded to the most distinguished institutions based on European institutional excellence standards.

It comes as a culmination of the IDSC’s efforts to root institutional values and creative culture within the work environment.

He also expressed his appreciation towards the efforts made throughout this period, and said he was looking forward to continuous and sustainable performance development, as the center deserves to take an advanced place among similar centers around the world.

The center, which focus on generating research, reports, data and information has been a true supporter to decision-makers everywhere, Madbouly added.

According to Assistant Prime Minister and Acting President of the IDSC, Osama al-Gohary, the EFQM Certificate of Excellence is an acknowledgment from the European Institution that the awarded shall commit to following the best administrative practices in its activities, and that it is capable of further business development.

The IDSC obtained this certificate after the assessment team held talks which included reviewing all followed procedures and methodologies, improvement chances and the result derived from the EFQM Excellence model, he explained.

The Acting President of the IDSC also revealed that management of internal operations is currently being improved upon alongside the methodologies adopted at the center to match European standards.

In addition, the foundation may ask the IDSC to launch three development projects, establish an agenda that aims at improving the performance in general, and apply for “Committed to Excellence (C2E)” certificate.

A team affiliated with the EFQM will visit the center to assess these projects, measure their implementation status, and ensure the center’s commitment towards the European quality standards to grant the award.

Al-Gohary said that the IDSC has won 14 Arab and international awards over 35 years; the most significant of which was receiving the best Arab organization award in 2002.

Last year saw the implementation of a comprehensive improvement plan for all the IDSC’s systems and headquarters, al-Gohary pointed out. It covered the “Legal Portal for Egyptian Legislations” and the “National System for Emergency Management”. 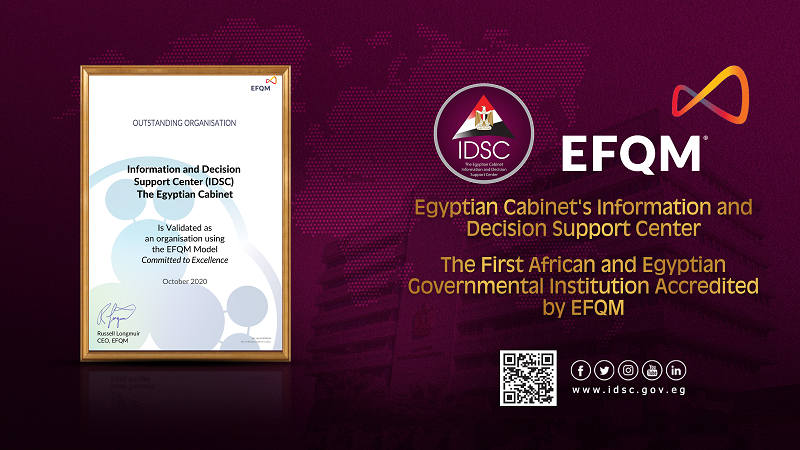 A unit for data sciences was established, specialized in processing big data and coming up with solutions to resolve any problems that may face decision-makers, while adopting the latest Artificial Intelligence systems.

Al-Gohary added that the IDSC has developed its communication channels in line with the public opinion and external community.

The center was also able to expand its editions of the weekly research bulletin, including “An Overview of Events”, “Development Snapshots”, and “Trends for the Future”.

Additionally, the IDSC has developed its online websites and improved the management of its official accounts on social media, to reach out to the largest number of followers using the latest information tools.

The IDSC also held a prominent role in supporting the government’s efforts in combating the COVID-19 pandemic through launching the “Egypt Cares” website. The website presents key information on the pandemic and its development.

Additionally, the IDSC launched the “Ahalena” (Our Citizens) website to support irregular employees.

The IDSC has cooperated with key Egyptian thinkers and opinion-writing journalists to write policy papers concerned with the issues of the most important changes globally and locally.

Last year, the center was keen on being present at both levels through hosting international conferences. The most important of which were the fourth Arab Partnership Meeting for Disaster Risk Reduction and the Governance and Egypt’s Vision 2030 Forum, organized in cooperation with the Chinese Embassy.

Al-Gohary added that the IDSC has also held an interest in forging partnerships with more international bodies such as the World Food Program, UNICEF and several other international organizations.

It has also worked on deepening cooperation aspects with numerous major global companies in the Information Technology (IT) fields.

This has culminated in the IDSC signing several cooperation protocols, the most notable of which were signed with the Egyptian Council for Foreign Affairs (ECFA) and the Al-Ahram Center for Political and Strategic Studies.

Finally, al-Gohary said that the IDSC has focused on the internal work environment through an ambitious plan to develop the human element. Opportunities were offered to youth to hold leading positions within the IDSC, research levels were restructured and new units were introduced to develop the work process.