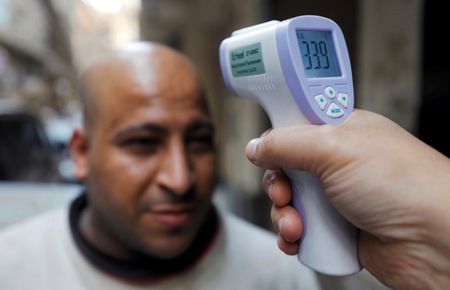 Egypt on Monday confirmed one additional death and 47 new coronavirus cases, bringing the country’s number of confirmed total cases so far to 656.

Forty-one people have died from the virus in Egypt.

The most recent death announced Monday is a 44-year-old Egyptian woman from Cairo who died upon arrival to hospital, Health Ministry Spokesperson Khaled Megahed said.

These newly infected cases are all Egyptian nationals who returned from abroad or were in contact with previously confirmed cases in Egypt, Megahed said, adding that the total number of fully-recovered cases rose to 150 on Monday, all of whom have been discharged from isolation hospitals.

On March 24, Prime Minister Mostafa Madbouly imposed a two-week nationwide curfew from seven pm until six am beginning on Wednesday and extended school closures an additional two weeks to fight the spread of coronavirus.

Violators of the curfew face penalties ranging from a fine of LE4,000 to imprisonment.

Image: A passerby has his temperature checked for free with a device belonging to a shop, due to the coronavirus disease (COVID-19) outbreak, in Cairo, Egypt March 19, 2020. REUTERS/Mohamed Abd El Ghany