Lately, a wave of campaigns encouraging women empowerment in Egypt have begun to prop up, hoping to bring change in a country known for its conservative values towards gender. Some campaigns use TV and radio advertisements, while others have taken to music to spread their ideas.

Meanwhile, Egypt’s National Council for Women (NCW), in cooperation with the United Nations Population Fund UNFPA, have come up with a wide-scale awareness campaign named “Hiatek Mahatat, Matkhalish Mahata Twa’afek” (Your life is made of stations, don’t let a station stop you) launched at the beginning of November 2018, aiming to support more women through different aspects of life.

Unlike prior awareness campaigns, this campaign doesn’t just push women towards their dreams but also addresses men, urging them to encourage women and provide any assistance needed to help women become better versions of themselves.

Photo caption: “Be a man, show some chivalry” A poster encouraging men to support women where they can.

The “sexual harassment” topic introduces potential disciplines for harassers and poses questions for women to act when confronted with harassment.

Next is “early marriage”, displayed as a message to parents emphasizing how unacceptable it is compel young girls into early marriage, denying them of their own freedom to choose a partner and forcing them into a relationship when they aren’t ready, leading to a host of health issues. 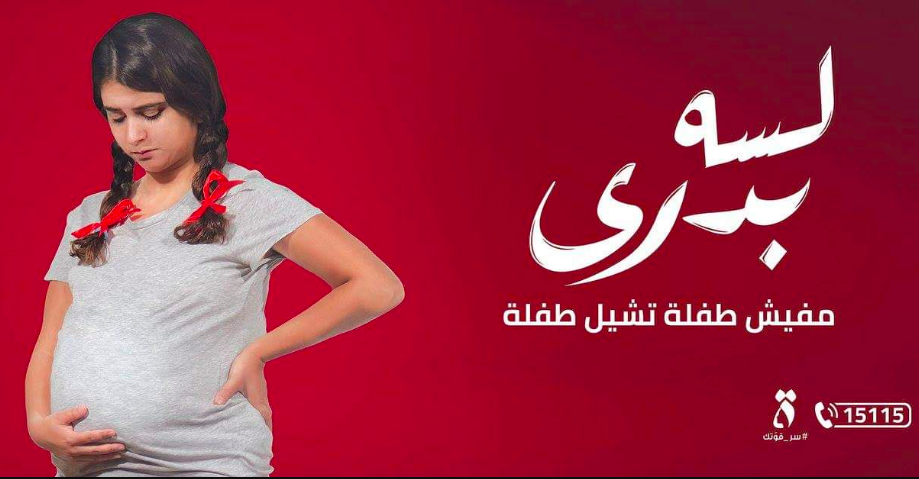 The third subject, “Be productive” (i.e. economic empowerment and productivity) urges women to stand on their own two feet to prove herself in the professional field.

The last subject of the campaign is “reproductive health”, urging women to put themselves first when it comes to their well-being, stressing that is the most significant factor behind their power and achievement in society.

Incentive ideas were also intertwined with the campaign’s main themes to encourage its audiences. They include women’s aspirations related to work, marriage, study and travel.

Dalia Ali, former Account Executive of Bluebox Agency, said that “We had many incentive posters hung around raising questions to each woman about what her next step is that would change her life for the better. These posters would run: ‘I’ll lose weight, I’ll work, I’ll study for my PhD, I’ll graduate…”

Photo caption: “Choose to catch your dream” A poster showcasing the freedom of career opportunities available to women

Additionally, the campaign urges men not only to defend women against sexual harassment, but also to support women to advance on the social, economic, and health levels.

“One of the posters we put in the metro stations depicts a man saying “malish daawa” (it’s none of my business) in order to critique men acting as bystanders when they see women being assaulted and humiliated”, Ali explained.

Photo caption: “Be a man, don’t waste her rights” A poster encouraging men to stand up against harassment.

How were campaign’s locations chosen?

Based on observations, the NCW realized from the attendance of the dozens of women to their events that these women do have something in common despite their differences in the socio-economic and educational levels.

“Life is made up of stations, which has a lot of resemblance with metro stations,” said Safaa Habib, Manager of the campaign at the NCW and General Director of PR Protocol and Event Management.

“This is a reality, we go through stages that hinder us, and sometimes go through others that push us forward,” she added.

The underground is also a means of public transportation that demonstrates diversity, as people from different places in Egypt take the subway every day, making it the most feasible commute to deliver over two million passengers daily.

Habib pointed out that “If we want to address different social classes,  the metro is the only way that we can reach these people and educate them on the subject.”

Photo caption: “Lots of children will tie you down, not your husband” A poster discouraging women from having large amounts of children.

Each of the four main Cairo metro stations, namely Abbassiya, Attaba, Ramses, and Cairo University stations, cover one campaign theme at a time in order to avoid causing confusion about any of the four topics, according to Haitham Nassar, Professor of Mass Communication at Misr International University, and CEO of Bluebox advertising agency.

Posters hung in the hallways of Cairo University station focus mainly on economic empowerment, for example, whereas the posters in Ramses station shed light on child marriage.

Moreover, each theme is represented using a specific color; for instance, child marriage is depicted in dark red, sexual harassment in grey, whilst reproductive health is blue.

Tactics to reach the largest audience:

The campaign has always been keen on adopting a different tactic in delivering its messages, employing the simplest and most common dialects with minimum wording on the posters.

Ali said their target audience “Necessitates the importance of using a very simple language to feasibly communicate the messages of the campaign, direct to the point, to a massive number of people who take the underground.”

In an effort have direct engagement with women, the NCW also created WhatsApp focus groups which sends supporting messages empowering women. The idea was met with great enthusiasm, “Some women volunteered and created messages, which they sent to the NCW in order to be included in the campaign’s slogans,” said Habib.

Regarding the results of the campaign, Habib said that “Many people took pictures with the posters hung on the walls and sent them to NCW Facebook page, while several others called the NWC hotline number to issue complaints or ask about ways by which they could initiate their businesses and establish their own start-ups.” 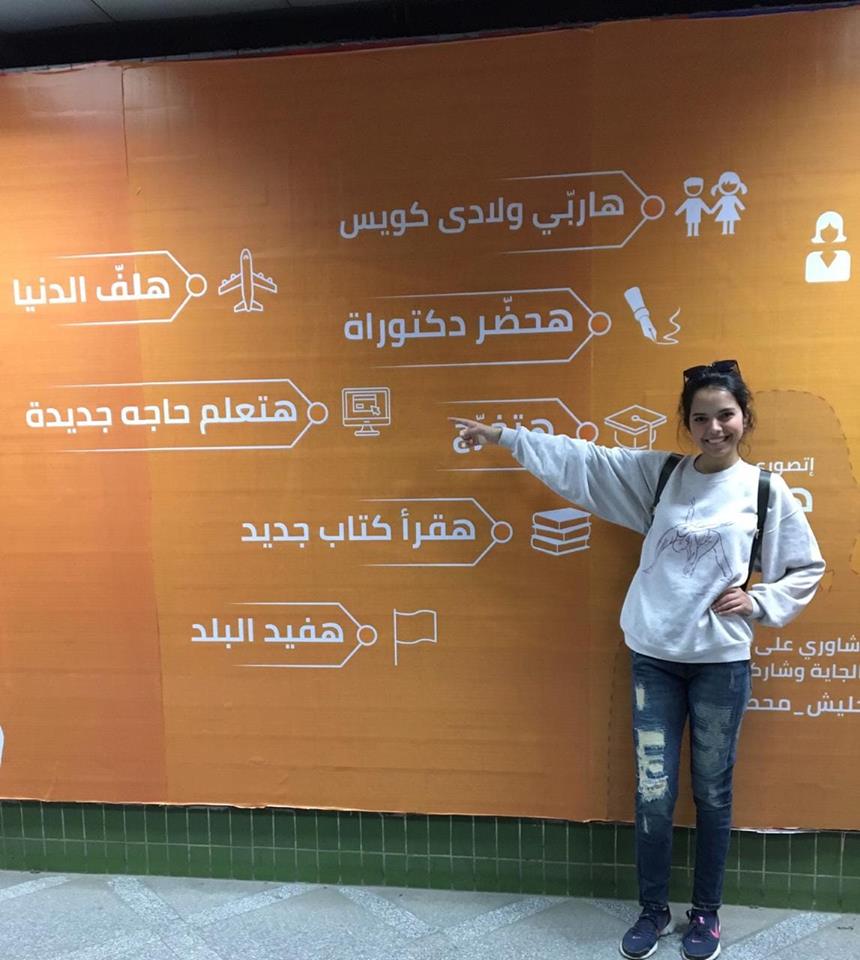 Photo caption: Mariam Mohamed, one of the volunteers, who sent her photo to the NCW, pointing to a future goal of learning a new skill.

“The campaign has fulfilled an incredible outreach, as calls on the hotline have increased compared to our prior campaigns,” Habib remarked.

There were still a few drawbacks, which the NCW learned from the Research Findings Center Baseera (Insight), following the launch of the campaign.

Among them, the color identification schemes were found to have some issues.

“We have four topics, each topic has a certain color, so what we found was that some topics were remembered over others, and this is where the color played a decisive role, as some colors were not as appealing and eye-catching as the others”, said Nassar

Habib added that “Economic empowerment was depicted in a blue color, which was not noticeable, since it was the same color used in painting the walls of the stations. Red, on the other hand, was very captivating and powerful in grabbing attention.”

The NCW intends to expand the campaign’s idea to other public transportation. Women empowerment-related posters are planned to be hung on public transport buses, which drive for long distances, so as to carry around the messages and deliver them into many different places across Egypt.