The Egyptian archaeological mission working in the Wadi al-Nasab area in South Sinai has discovered the remains of a building that was used as a headquarters for the leader of the Egyptian mining expeditions in Sinai during the Middle Kingdom. 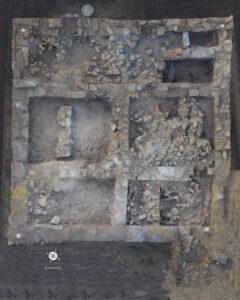 The head of the archaeological mission Mostafa Nour Eddin said that the study also proved that this headquarters was used since its construction as a headquarters for mining missions, but it was abandoned during the second transition period, then reused during the era of the modern state, and then neglected again.

He pointed out that archaeological and scientific evidences indicate that the building was used in the Roman era; as some internal modifications were implemented to the building, such as making an entrance to it from the north, adding separating walls between the halls, and using some rooms as workshops for smelting copper.

Secretary-General of the Supreme Council of Antiquities Mostafa Waziri explained that this mission is the first to carry out excavations in this area.

Waziri said that the headquarters is a square-shaped building consisting of huge stone blocks of sandstone with a floor of stone slabs and extending over an area of approximately 225 square meters.

Ayman Ashmawy, head of the Egyptian Antiquities Sector at the Supreme Council of Antiquities, added that the initial studies on the building indicated that at the time of its construction it consisted of two floors; the first has two halls, two rooms, a bathroom, a kitchen, and a staircase that leads to the second floor.

He said that in the middle of some rooms inside the first floor, the mission found some column bases, which indicated that they were used to install and support the ceiling.

Nour Eddin said that in the upper layers of the building, the mission found copper smelting furnaces and metal processing areas, in addition to four copper ingots, each weighing between 1200 and 1300 grams.