Egypt's economy is forecasted to grow 3.9 percent by the end of 2017 and will be largely driven by public investment and net exports, according to a World Bank report issued earlier this week.

GDP growth this year is reported to be slower, down from an estimated 4.3 percent in the same period last year. The World Bank predicts Egypt’s economic growth will accelerate to 4.6 percent in 2018, and to 5.4 percent in 2019.

It added that key sectors, like tourism and the oil and gas industry, continue to experience negative growth due to under investments and arrears. 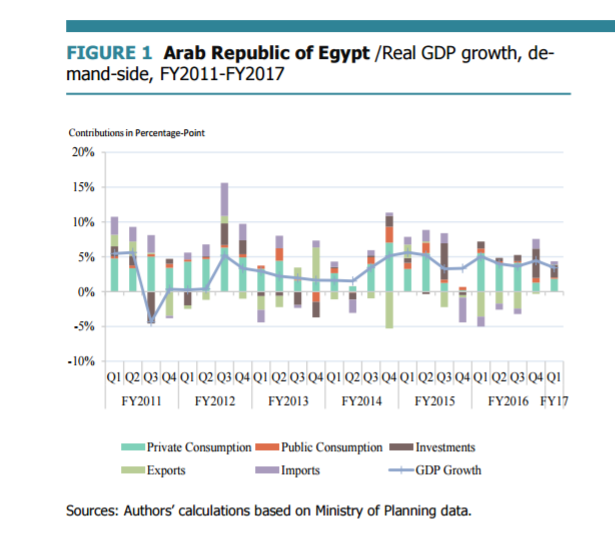 Egypt's currency peg, combined with a decline in foreign investment and tourism after the January 2011 Uprising, drained the central bank's foreign reserves, forcing it to ration dollars and impose capital controls before the flotation.

According to the World Bank report, foreign direct investment inflows increased to $1.9 billion, up from $1.4 billion the previous year after Egypt signed a $12 billion three-year loan program with the International Monetary Fund. The program calls for aggressive economic reforms, including energy price increases and the introduction of value-added tax.

Furthermore, the report shows that currency weakening has led to a sharp rise in inflation, which reached its highest recorded level of 30.2 percent in February 2017. High inflation has consequently contributed to the aggravation of social conditions, given high unemployment rates reported as 12.6 percent in 2016, the report said. 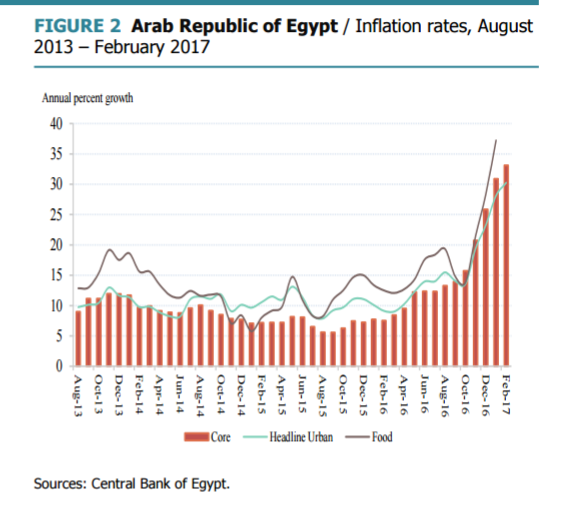 “The recently adopted reform program involves efforts to improve social safety nets, notably through the partial reallocation of freed-up resources from reduced energy and food subsidies; the expansion of cash transfer programs; and an increase in the general pension budget by 15 percent. Nonetheless, the mitigation of recent adverse shocks will continue to depend on an effective targeting mechanism,” the World Bank report said.

Egypt’s fiscal deficit is expected to narrow to 10.5 percent in fiscal year 2017 (FY17), depending on the government’s commitment and ability to sustain its fiscal consolidation plan. With the VAT’s implementation and efforts to improve tax collection, revenues are expected to improve, while expenditures will continue to be contained.

The report shows that the current account deficit is expected to start improving in FY17, supported by a positive exchange rate effect and an increase in remittances transferred through formal channels.

“In the near term, high inflation is likely to have negative short-term effects on households. Current efforts to improve targeting in the food smartcard program could provide additional resources for an improved safety net,” the report added.

Nevertheless, the report mentions that “policy slippage and absence of real-sector reforms” can negatively impact the anticipated economic recovery.

“Deteriorating security risks can adversely affect the recovery of the tourism sector, traditionally a main source of revenue and foreign currency, resources from fuel subsidy reform to be allocated to social programs may be lower than expected due to currency depreciation, and high unemployment may lower households’ ability to improve their living conditions,” according to the report.