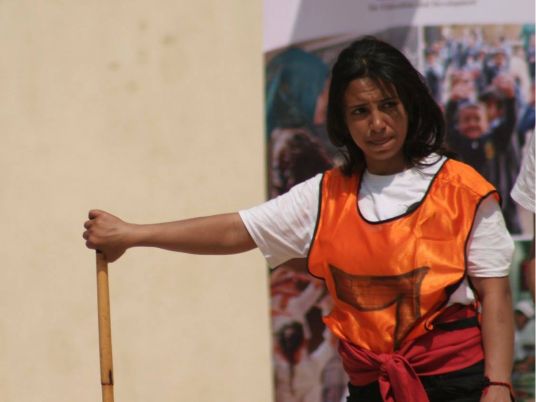 Born and raised in Egypt's conservative southern province of Assiut, Rania Medhat is challenging sexist barriers and restrictive notions about female participation in sports and their athletic abilities by becoming the first ever certified female tahteeb trainer, an ancient Egyptian stick martial art that has been exclusive to men since the days of the Pharaohs.

"Women were not even allowed to attend tahteeb performances. I am so proud to be the first certified female instructor for this ancient sport," 24-year-old Medhat told Egypt Independent on Sunday.

The history of tahteeb dates back from around 2700 BC to 2150 BC.  Engravings of the sport were discovered at the Necropolis of Abusir. It was one of three kinds of martial arts that were taught to soldiers during their training, along with wrestling and archery. Fast forward to now, men from Upper Egypt perform tahteeb in weddings as a form of art to celebrate their folklore.

Graduating with a bachelor degree in Physical Education from Assiut University in 2013, and currently working as a PE teacher in Nekheila village, Medhat’s journey in tahteeb only kicked off early this year. She was selected this February by the Association of Upper Egypt for Education and Development to participate in a modern tahteeb training course in Cairo, taught by the founder of modern tahteeb Adel Boulad.

“I was fond of tahteeb as a child and I knew all about its traditional practice, everyone knew it was a male dominated practice. When I learned that modern tahteeb is giving space for women to join, I did not hesitate to take part in the training,” Medhat said. 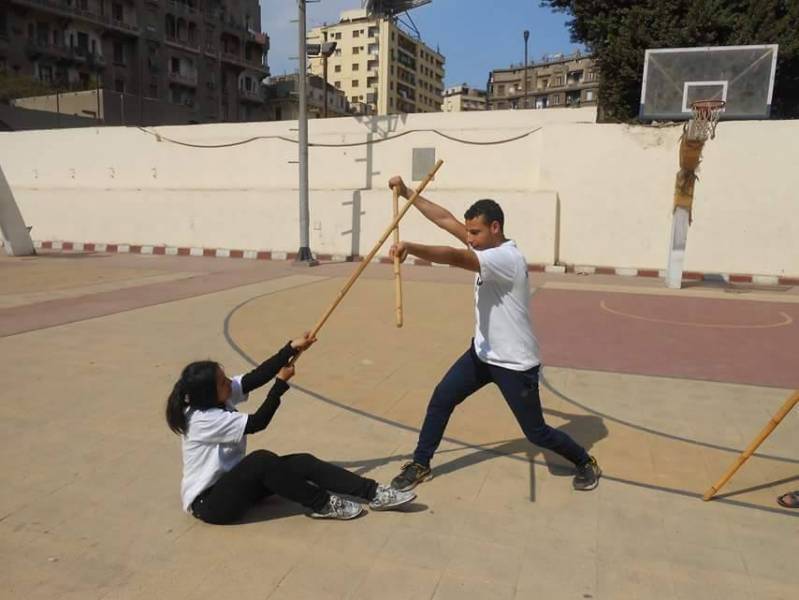 “I wanted to prove that I am capable of practicing it, and I have the will and perseverance to compete professionally,” she added.

After completing the month training in Cairo, graduating in second place, Boulad nominated her for another course, with five other candidates, to become a trainer. She passed the training course and became the first certified female tahteeb trainer in Egypt.

Her team in Nekheila consists of men and women aged 15-22 years old.

“I do not think it’s physically hard for women to practice tahteeb, or anything else really, all it needs is some flexibility and attentiveness, and with practice we can master what we put our minds too,” Medhat said. 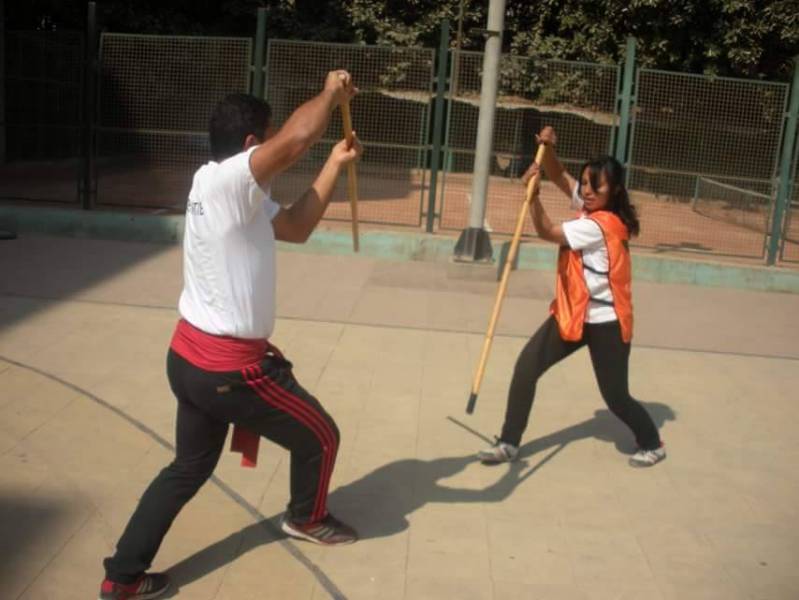 In Assiut, Medhat’s family and friends were worried about her practising a sport that has been largely monopolized by men through the years; however, they did not object to her decision to join the courses.

“They had a stereotypical impression that I’d be dancing in a galabeya, like what we are all used in seeing in old Egyptian movies, but that is traditional tahteeb. Modern tahteeb, however, has been contemporized to suit both genders. I told them it’s a sport and not a dance,” she said. 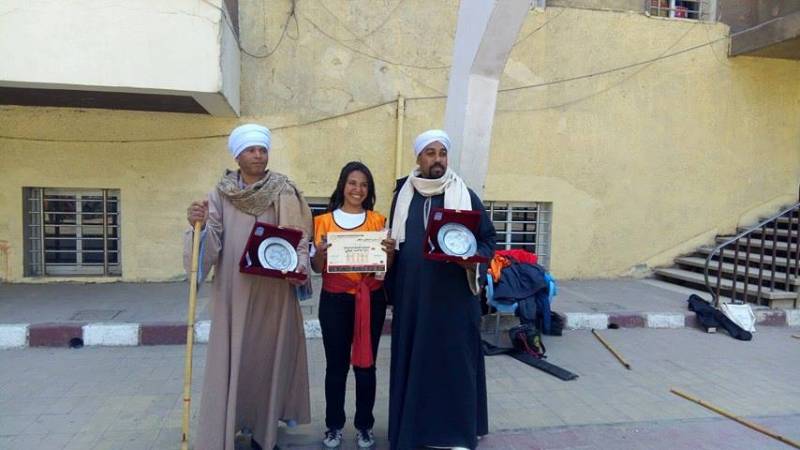 Medhat further explained how no fundamental changes were made between traditional tahteeb and the modern form. Adel Boulad basically twisted the ancient practice into a sport, she said.

Medhat explained to Egypt Independent the general atmoshphere and rules of practicing tahteeb.

The audiences attending usually form a circle and surround the two competitors, each of whom hold a wooden cane or a stick. Drum beats can be heard throughout the game. In modern tahteeb, players wear loose, comfortable clothes, t-shirts, pants and sports shoes.

After performing an opening ritual, competitors take turns making one-minute attacks. The objective of the game is to touch the other's head without being touched back. She explained that a game is won once a player touches the other once on the head, or three touches somwhere else on the body. 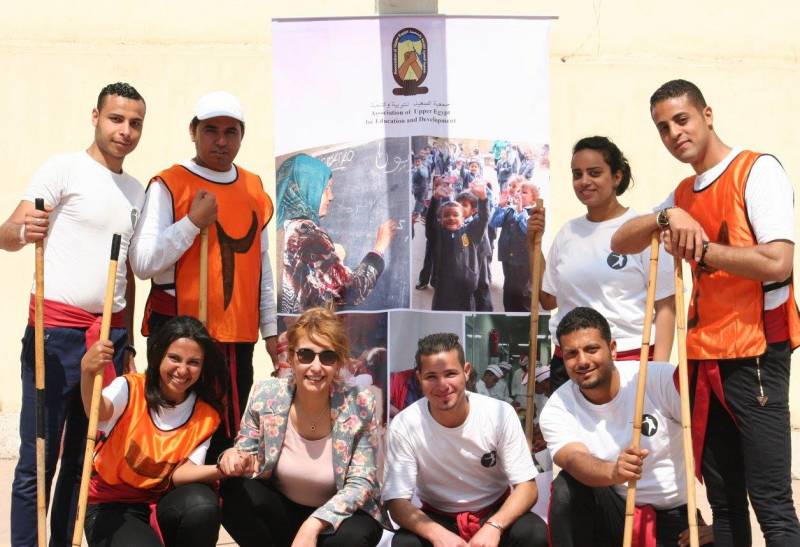 “This practice defines our Egyptian heritage and identity. I believe all Egyptians should learn about it and practice it,” Medhat said, adding that it boosts self-confidence, as well as enhancing agility and flexibility. 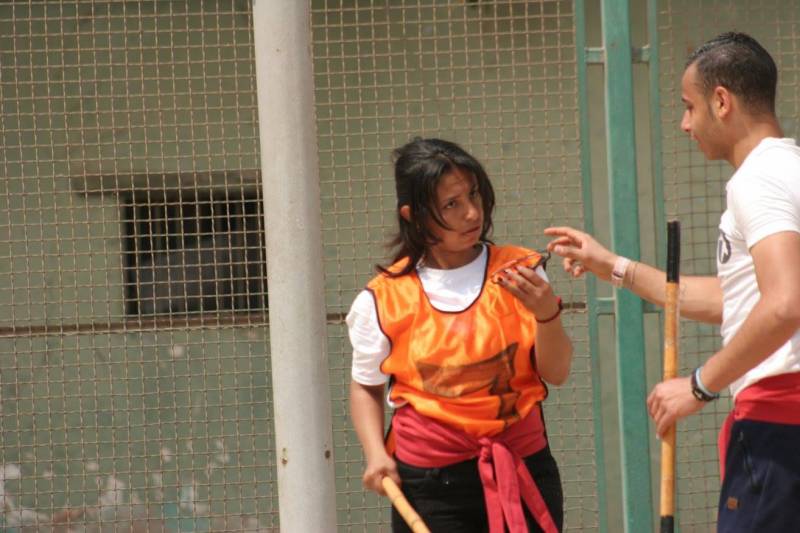 Even though she’s still taking the first steps in smashing gender stereotypes, Medhat says the sky is the limit in what she wants to achieve.

“One day I want to open up a department for modern tahteeb in the faculty of Physical Education in Assiut, but if this is still far fetched then I want to sign a contract with one of the prominent sporting clubs in Egypt to train there,” she said.

You can watch Rania Medhat performing tahteeb in this video until 1:30 minutes: