The Global Firepower Index (GFI) ranked Egypt's military as the 12th most powerful worldwide ahead of Isreal, Vietnam and Brazil, in a list of 126 countries with the most powerful militaries in the world for 2016.

The GFI criteria ranks the countries based on more than 50 factors, including each country's military budget, its manpower, the amount of equipment each country has in its respective arsenal and its natural resources.

Based on these factors, the report listed Egypt as the 12th most powerful military, having a military budget worth only US$4.4 billion, in contrast to the US military budget of US$581 billon. Egypt, however makes up for its low budget with a sweeping 1,270,000 active personnel, compared to Vietnam’s first place number of 5,455,000 personnel.  Egypt also owns 4624 tanks, more than of Israel which has 4170 tanks.

GFI ranked Egypt's military as the strongest in the MENA region, followed by Israel which ranks 16th in the world.

The index highlights each country’s highest criteria, listing the US as the world’s most powerful military and scoring it first for the number of aircraft (13,444), aircraft carriers (19) and submarines (75). Russia, however, scored first with the number of tanks at 15,398.

The index, however, is considered to be flawed for various reasons; Business Insider reports that it seems to be relying heavily on quantity rather than quality.

“It's important to note that the index focuses on quantity while ignoring significant qualitative differences. For example, North Korea's 70 submarines are old and decidedly low-tech compared to what the US and others have. The index doesn't take into account nuclear stockpiles, which are still the ultimate trump card in geopolitics. And it doesn't penalize landlocked nations for lack of a standing navy,” Business Insider says.

Check out the top 25 countries below: 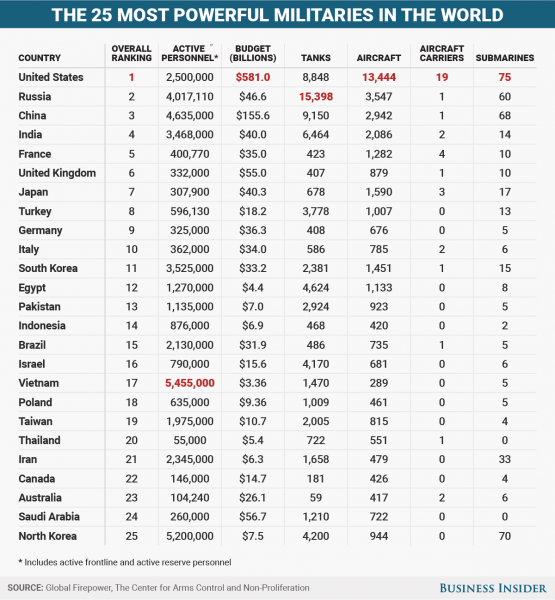 You can check out the full report from here.

Egypt in the top 5 destinations for Russian travelers in summer