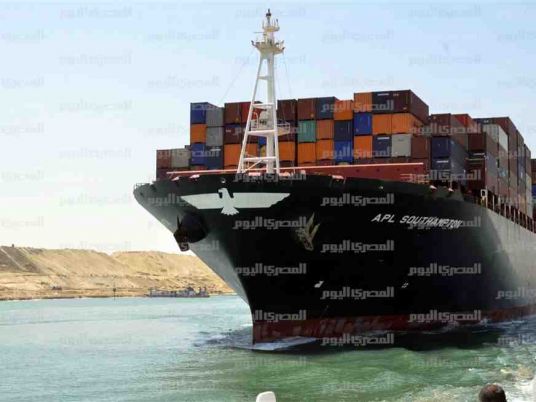 Egypt's Suez Canal revenues fell 4.4 percent in September for the eighth consecutive month, reaching US$448.8 million, compared to $469.7million in the same month last year, according to the Suez Canal Authority.
The canal's revenues inched down by 0.14 percent during the fiscal year 2014-2015, reaching US$5.37 billion, compared to $5.36 billion in the previous year, according to the Central Bank of Egypt.
Egypt's fiscal year starts in July and ends in June of the following year. The waterway is one of Egypt's main sources of foreign currency.
On August 6, president Abdel Fattah al-Sisi inaugurated a new parallel waterway to the Suez Canal, which cost about $4 billion (LE32 billion) and was mostly financed by investment certificates sold to Egyptians.
The government said the project would more than double revenues from Suez Canal tolls, a key income generator for Egypt, from the $5.3 billion projected for 2015 to $13.2 billion in 2023.
Economists and shippers have questioned the value of the project, saying the increased traffic and revenues the government is hoping for would require major growth in global trade, which at this point seems unlikely, according to AP.
Credit ratings provider Moody's expected that with the historical average growth, Suez Canal revenues will register at just below $5.6 billion in 2023. For revenues to reach the projected $13.3 billion, Moody's said Egypt would need a 10 percent increase in world trade growth.
The World Trade Organization (WTO) economists have lowered their forecast for world trade growth in 2015 to 2.8 percent, from the 3.3 percent forecast made in April, and reduced their estimate for 2016 to 3.9 percent from 4.0 percent.