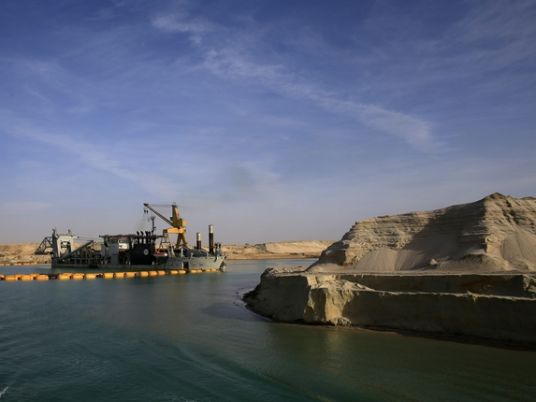 Egypt's New Suez Canal will open on Aug. 6, its overseer said on Saturday, a project President Abdel Fattah al-Sisi sees as a potent symbol of national pride and a major chance to stimulate an economy suffering double-digit unemployment.

The army began work 10 months ago on the $8 billion canal, flanking the existing, historic 145-year-old waterway and part of a larger undertaking to expand trade along the fastest shipping route between Europe and Asia.

The Suez Canal is a vital source of hard currency for Egypt, particularly since the 2011 uprising that scared off tourists and foreign investment.

"The digging and dredging works will conclude on July 15. The opening of the New Suez Canal will be on Aug. 6, according to the orders of the Egyptian people and the Egyptian president," Mohab Mameesh, chairman and managing director of the Suez Canal Authority, told a news conference in Ismailia.

"Once President al-Sisi orders the start of navigation on Aug. 6, ships will be able to go through the canal."

Mameesh said the new canal would reduce navigation time for ships to 11 hours from about 22 housing, making it the fastest such waterway in the world. The new and old canals are connected by four small channels.

"They are not only digging or dredging works, but also preparing the maritime path to be valid and secure for global navigation. We will not allow any ship to pass unless it has navigational security," he said.

The existing canal earns Egypt around $5 billion per year, a vital source of hard currency. The new canal, which will allow two-way traffic of larger ships, is supposed to increase revenues by 2023 to $15 billion, Mameesh said.

The government also plans to build an international industrial and logistics hub near the Suez Canal that it expects will eventually make up about a third of the Egyptian economy. .

Mameesh said he hopes a law designed to ease red tape for investors in the new Suez industrial hub will be enacted this week, adding that the new canal and the hub projects could help Egypt to realize an extra $100 billion in revenue per year.