It seems Egypt is putting on a good show in front of the world, and not just in football. In a poll titled “Travel World Cup”, which was posted by British newspaper The Telegraph, comparing World Cup groups as travel destinations, Egypt came as the voters’ most popular travel destination within group A, surprisingly taking over Russia and Uruguay and less surprisingly taking over Saudi Arabia. 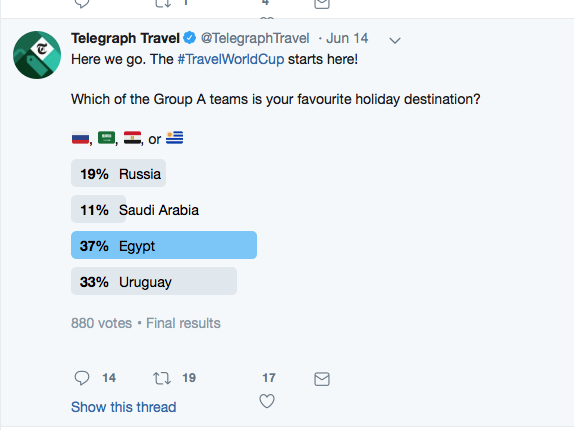 However, since then, Egypt has gained a lot of the ground it lost as a travel destination. In 2017, Bloomberg ranked Egypt as one of its top 20 travel destinations, saying the country has “shed its years of social and political unrest.”

The numbers echoed the great reviews Egypt has been receiving. From January until November 2017, 7.5 million tourists visited Egypt, according to numbers by the Egyptian government. This marked a 54.7 percent increase from 2016 statistics during the same period.

This is Egypt’s first participation in the World Cup since 1990. So far, Egypt lost to Uruguay 1-0 after a strong performance in its opening match. Egypt is set to play against Russia on Tuesday, followed by Saudi Arabia on Monday 25/6.