A place naturally influences those who occupy it. And that influence is reflected in those people’s acts, words and the tiniest details of their everyday lives. Members of independent band El-Dor el-Awal, or “The First Floor,” were enormously influenced by the place in which they first started out as a band, and the group’s name was inspired by the place where these musicians first launched their muscial careers.

Place also influenced the type of music they play, which they insist is genuinely Egyptian–even though the band uses some Western musical instruments to play its tunes.

El-Dor el-Awal plays instrumental music, with no vocals. Yet the band has been able to draw a large young audience despite its limited number of concerts, the most recent of which took place as part of the Artbeat Festival, held at the Darb 17/18 Center, the Geneina Stage at the Azhar Garden, the Jesuit Center, and the Cairo Jazz Center.

According to Ahmed Omar, a founder of the band and its bass guitarist and composer, the formation of the band was spontaneous rather than planned. Omar says he met with his friends, Bob and Mizo, both percussionists, in his apartment in downtown Cairo to compose a musical piece for a singer. The three were then joined by violinist Mohamed Sami, saxophonist Nour Ashour, and qanunist and keyboardist Fadi Badr. After a while, the group began playing music composed by Omar in the same apartment where they first met. Before long, they decided to form their own band.

Following seven months of rehearsals, the band decided to hold its first concert at the Cairo Jazz Center. But band members had not yet chosen a name for themselves. After considerable discussion, they decided to name themselves El-Dor el-Awal, because the apartment in which the young musicians used to meet had been on the first floor.

Omar says that, like any other independent band, the group faced a number of problems in its formative stages. Not long ago, independent art was seen as foreign, even unacceptable, to young people. “But this has changed now,” says Omar. The media tends to show keener interest in commercial music, and this is one major obstacle faced by independent musicians–even though, Omar notes, most popular singers nowadays begin as independent singers.

Independent musicians also tend to suffer from a shortage of funds. But the band has been able to surmount this problem, helped by the fact that they don’t need to rent studios for their rehearsals, since their first-floor apartment served this purpose.

So far, the band has released two albums: Qarar Ezala (“Demolition Order”) and Attaree (“On the Road”). But they still have difficulty penetrating the media and reaching wider audiences. The band has yet to achieve the level of publicity garnered by other bands sponsored by massive production companies, for example.

The number of independent Egyptian bands has grown considerably over the past few years. But what sets El-Dor el-Awal apart, says Omar, is the fact that it plays its own songs and does not depend on folkloric music. Furthermore, the band plays purely instrumental music. “The Egyptian identity also manifests itself strongly in the band’s music,” adds Omar. “The melody is sacred,” he notes, stressing that the group insists on composing the music and then later developing appropriate rhythms. “This is how music should be composed,” Omar explains, “unlike what many other bands do.”

One of the pieces played by El-Dor el-Awal is entitled El-Manial, an old Cairo neighborhood, which illustrates how the influence of place is not restricted to the band’s name, but extends to its music as well. 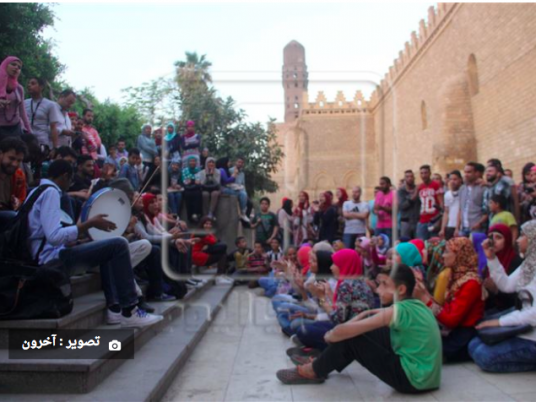