The week-long trial in Delaware Court of Chancery will examine the 2018 compensation plan that the automaker’s board of directors created for Musk. The automaker said at the time it could be worth nearly $56 billion, making it the largest compensation package for anyone on Earth from a publicly traded company, and the net value today is $50.9 billion.

Even in the rarified air of CEO pay, Musk’s compensation plan stood apart. Millions upon millions of dollars are often lavished on corporate executives of the biggest companies, but the plan to pay Musk initially totaled in the tens of billions, as long as he met performance goals. It wasn’t in cash – top executive pay rarely is – but in shares of the company. The higher Tesla went, the more those shares would be valued, the more Musk would be awarded and the more those shares would be worth. And as Tesla’s stock shot ever upwards, it helped propel him to a net worth of over $300 billion at one point, all while shareholders reaped the potential gains.

But all the while, Musk was sharing his time between his many other endeavors. SpaceX began regularly sending astronauts to the International Space Station. The Boring Company built a Loop under the Las Vegas Convention Center. And then, of course, he bought Twitter.

Musk isn’t the only one to benefit from the rise in value of Tesla shares and options, however. So have shareholders. The market value of Tesla has soared more 1,000% since they approved his pay package in March of 2018.

The case could be significant for Tesla, given the serious questions raised about its executive compensation, according to corporate governance experts. Tesla’s board of directors has defended the compensation package.

The trial may also invigorate debate over executive compensation, including large stock grants they receive. S&P 500 CEOs averaged $18.3 million in compensation in 2021, 324 times the median pay at the companies. That disparity has grown in recent years.

The plaintiff, Richard J. Tornetta, claims on behalf of Tesla shareholders that Musk exploited his control over the company and its board of directors to secure the huge compensation package in order to “fund his personal ambition to colonize Mars.”

Musk entered March 2018, the month shareholders approved the compensation plan, at No. 41 on the Bloomberg Billionaire’s Index, due largely to his involvement in Tesla and SpaceX. At the time, Tesla was a promising but troubled automaker. It had lost nearly $2 billion the year before and struggled to overcome production delays as it manufactured its mass-market Model 3 sedan. Musk spoke of being in “production hell” as well as “delivery logistics hell” during the year, and joked about going bankrupt.

Many questioned if the company could survive as an independent automaker.

Tesla’s board of directors felt that with proper execution the automaker could become one of the world’s most valuable companies and wanted to encourage Musk to lead it for the long term. The compensation plan included 12 batches of stock that Musk would receive if milestones were hit, including the market capitalization of Tesla as well as its revenue and adjusted earnings. (Each batch of stock would be earned if Tesla’s market capitalization increased an additional $50 billion above $100 billion. Other milestones included hitting $35 billion in annualized revenue and $3 billion in adjusted earnings.)

The plan, originally set to pay out over the course of a decade, turned out to be wildly lucrative for Musk and in astonishing time. Tesla was the best performing US stock in 2020 and became America’s most valuable automaker ever. Its small SUV, the Model Y, became the best-selling car in Europe recently.

Musk has reached many of the milestones that trigger the payouts, and he is expected to earn the final batch early next year.

The payment plan helped lead to Musk becoming the world’s richest person, with an estimated net worth of $184 billion, according to the Bloomberg Billionaire’s Index. His true net worth can be challenging to estimate as a significant portion is invested in SpaceX, a private company that does not have to publicly reveal detailed financials that could show a decline or increase in value. Tech stocks and the entire stock market more broadly have fallen sharply this year.

A Duty to Shareholders

Tornetta argued in his original 2018 complaint that the compensation plan was unnecessary to incentive Musk as he already had a large ownership stake in the automaker.

The lawsuit was certified as a class action case by the court in January 2021. The case has taken years to move through the system due to the drawn-out nature of litigation, including working through a motion from Tesla to dismiss the complaint.

The Tornetta complaint alleges that the board of directors that created Musk’s compensation plan lacked sufficient independence from him. The board included Musk’s brother Kimbal as well as friends Anthony Gracias and Steve Jurvetson. (Jurvetson and Gracias have since left Tesla’s board.)

Carla Hayn, a professor who teaches corporate governance at the UCLA business school, told CNN Business that the case is serious for Tesla as it will be a heavy burden for the automaker to prove the compensation and the process to create it was fair.

“This is a huge package,” Hayn said of the compensation plan. “Did they need to give away this much of the company to Musk to align his interests and keep him as CEO?”

She noted that Institutional Shareholder Services and Glass Lewis, advisory firms, both recommended in 2018 that Tesla stockholders reject the compensation plan.

Institutional Shareholder Services cautioned that the plan “locks in unprecedented high pay opportunities for the next decade,” and noted that Musk already owned 22% of Tesla, aligning his interests with it. But shareholders did approve the plan, she noted.

Hayn noted that Musk’s close relationships with the board members could be problematic for Tesla in the case.

“Given that that entire board is very much under the influence of Musk it’s hard to know that anything that they did would be following proper process,” she said.

Tesla’s board of directors have claimed that it created the plan “after more than six months of careful analysis with a leading independent compensation consultant as well as discussions with Elon.”

“We gave Elon the ability to share in the upside in a way that is commensurate with the difficulty of achieving them,” they said at the time.

Tesla did not respond to a request for comment and generally does not engage with the professional news media.

The trial is expected to last a week. Chancery court judges at times rule from the bench, but that’s uncommon. It may take weeks to months before a decision is issued.

Musk has become something of a regular at the Delaware Court of Chancery. Last month his acquisition of Twitter nearly went to trial at the court. He testified before the court last year in a dispute over Tesla’s acquisition of SolarCity. A judge ruled in Musk’s favor this April.

Musk’s unique management style will be a topic of discussion. He leads several ventures outside of Tesla: the aerospace company SpaceX; his tunneling venture The Boring Co.; a brain interface startup, Neuralink; and Twitter. It’s uncommon for executives to hold multiple CEO titles. 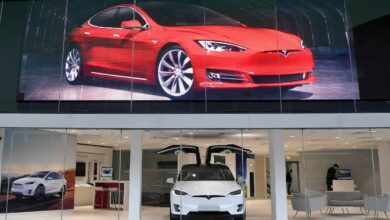 Tesla cuts prices in the US and Europe. Shares fall

Elon Musk has lost a bigger fortune than anyone in history