ISTANBUL (AP) — Chinese authorities are placing the children of Uighurs and other ethnic minorities into dozens of state-run orphanages across the far western Xinjiang region, as around 1 million adults in their families are sent to internment camps.

The orphanages are only the latest example of Beijing’s efforts to systematically distance young Muslims in Xinjiang from their families and culture. Uighurs fear such efforts are erasing their ethnic identity, one child at a time.

In Istanbul, The Associated Press spoke to a dozen Uighur families during the Muslim holy festival Eid al-Adha, which comes with large family reunions. Tables in every home were resplendently laid out with traditional Xinjiang dishes like homemade noodles, freshly butchered lamb and crispy nan bread.

But the Uighurs who fled China to avoid detention describe the sharp absence of the children they left behind — children who they believe are now in the hands of the very government tearing their families apart.

Some did not want their full names used for fear of retribution against relatives still in Xinjiang. 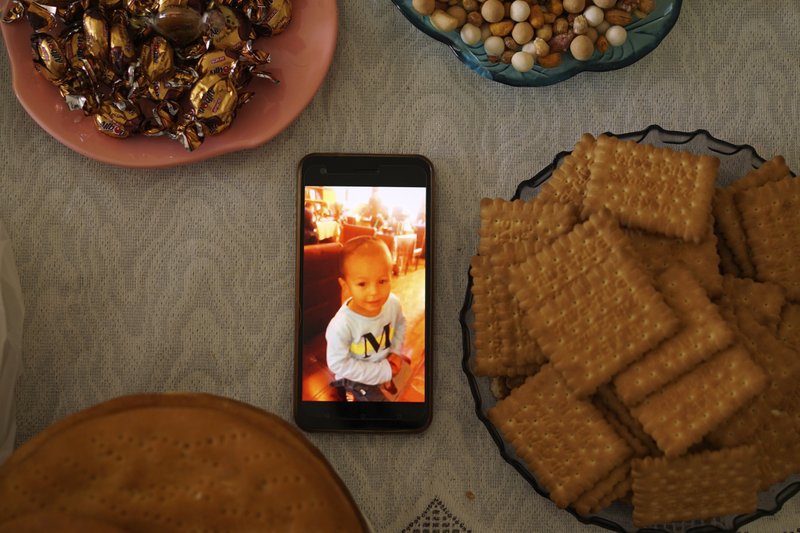 A phone displaying an image of one of Aziz’s children, now missing, sits on a table surrounded by baked goods at his home in Istanbul, Turkey. (AP Photo/Dake Kang)

Back in the southern Xinjiang city of Hotan, Aziz ran his own medical clinic. The 37-year-old surgeon says he was on his way to buy a new car when he received a call from his local police station ordering him to immediately report to authorities.

Already, more than half of Aziz’s neighbors had been taken away to re-education centers or prison, he says, and he didn’t want to end up like them.

He went straight to the airport after hanging up the phone. He told no one, not even his wife, because he feared that anyone he communicated with would be caught as well. Like many Uighurs who fled China in recent years, Aziz thought that he just needed to wait for the political situation to calm down.

More than a year later, he is waiting still.

Aziz said of his wife and four kids, including a 4-year-old son named Ibrahim: “I didn’t realize they were my everything until I lost them.” 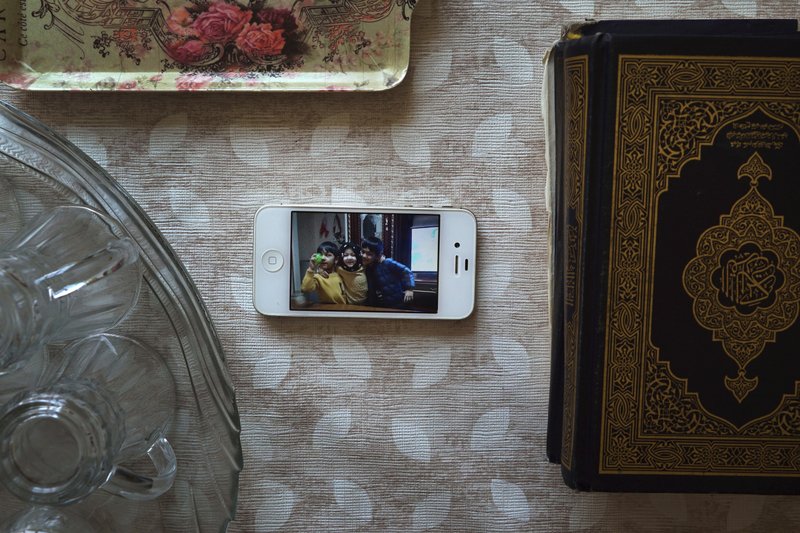 A phone displaying an image of three of Meripet’s children, now in a live-in kindergarten in China, on a table surrounded by tea glasses and a Quran in her home in Istanbul, Turkey. (AP Photo/Dake Kang)

As a young nursing student in Hotan, Meripet earned good grades and easily obtained her license. She worked for a private hospital until she got married and decided to “use all (her) heart” to raise her kids.

Meripet’s goal was for her children to become “useful people.” When she walked her son to school every day, she would take the opportunity to instruct him on how to do good deeds and treat his family well. At home, they read books about successful Muslims, says Meripet, now 29 years old.

“Every minute I spent with them, I remember clearly,” she said.

During this year’s Eid al-Adha, the Muslim holy festival, Meripet gave her youngest son a new outfit of denim jeans, a striped vest and a green and silver bowtie, newly-purchased for the holiday.

The moment was bittersweet: one-year-old Abduweli is Meripet’s only child in Turkey. He has never met his four older siblings, whom Meripet believes are in a state-run de facto orphanage in China.

“If God gave me a chance to speak to my children, I would have so much to say,” Meripet said. “The biggest thing would be to say — I’m sorry.” 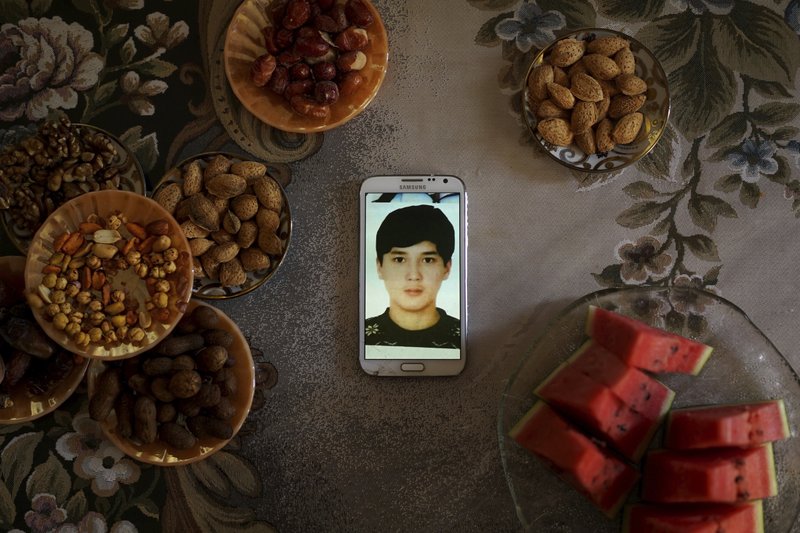 A phone displaying an image of Pakzat Qurban, now 18, who was imprisoned in China when he was 16, sits on a table surrounded with plates of watermelon and nuts at the home of his parents in Istanbul, Turkey. (AP Photo/Dake Kang)

For Qurbanjan Nurmemet and Gulgine Mehmut, restaurant owners from the northern Xinjiang city of Karamay, receiving news about their oldest son has meant by turns resisting and succumbing to blackmail.

The whole family — Nurmemet, Mehmut and their five kids — moved to Istanbul in 2015. But in early 2016, their then-16-year-old son, Pakzat Qurban, boarded a flight bound for Xinjiang with the intention of visiting his ailing grandfather.

Pakzat was the family’s pride. Bright and athletic, he had entered calligraphy and boxing competitions in their hometown and scored highly in both.

He was apprehended at the Urumqi airport, his parents said.

About two months after his son disappeared into the hands of authorities, someone claiming to be a Karamay police officer added Nurmemet on a Chinese messaging app, Nurmemet said. For nearly three years now, the man has sporadically sent them photos or updates about their son, promising to continue sharing information if the couple helps him spy on Uighurs in Turkey.

Nurmemet said the contact sent him an eerie message before Eid al-Adha this year: “I spoke to your son recently. He calls me often to tell me about his joys and miseries. I’m the only one now that your son loves and trusts, and he says you should cooperate.” 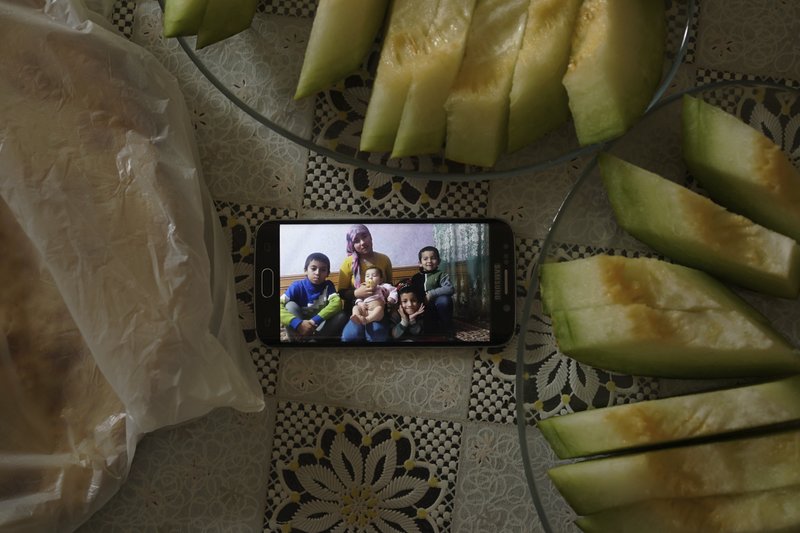 A phone displaying an image of the family of Adil, 42, father to five children and a businessman from Kashgar, China, sits on a table surrounded with bread and melons in Istanbul, Turkey. (AP Photo/Dake Kang)

Adil said his kids started disappearing from his life even while he was still a businessman in Kashgar.

In 2014, his then-nine-year-old son had to enroll in a boarding school and was only allowed to come home on the weekends. The newly-built boarding school was the only option for children living in their Uighur district, Adil said, and it was understood that parents who did not send their kids there would be breaking the law and punished.

He and his wife, who has since been sent to an internment camp, once visited their son during a class break. Adil was nervous. The iron bars around the school’s windows reminded him of a zoo.

“How’s school?” Adil asked his son when he finally came out of the schoolyard, with the gatekeeper’s permission. “Are you eating well?” Adil thought his son looked frail.

Adil asked if he could visit his son’s classroom. His son told him no, parents were not allowed inside. 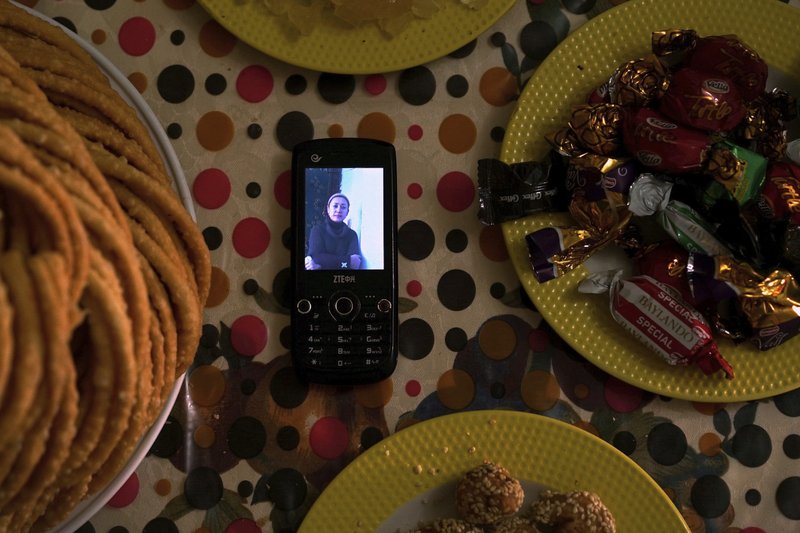 A phone displaying an image of Gulzar Seley, who was detained in China along with her newborn son, is placed on a table next to platters of sweets in the home of her husband Halmurat Idris in Istanbul, Turkey. (AP Photo/Dake Kang)

Halmurat Idris and his wife spent their last night together arguing. His wife, Gulzar Seley, and their infant son were about to travel from Istanbul back to Xinjiang to see Seley’s dying mother.

Idris pleaded with her not to go — he had heard about Uighurs being detained for going abroad.

But Seley was determined. She was devastated that she had already missed her father’s death and stayed up tearfully watching videos of her sick mother. Plus, Seley didn’t think she would be targeted by the crackdown.

Seley was detained upon landing at the Urumqi airport and taken to Karamay, her hometown. Though she was released after a few days, police followed her everywhere she went.

She told Idris that she wouldn’t be coming back to Istanbul because she “didn’t have time.”

A month after Seley’s return to China, she disappeared. Idris said he later learned that she was sent to prison, and that his son was jailed with her.

“My brain couldn’t process this cruelty,” Idris said. “What on earth are they doing?”

China’s lockdown protests: What you need to know