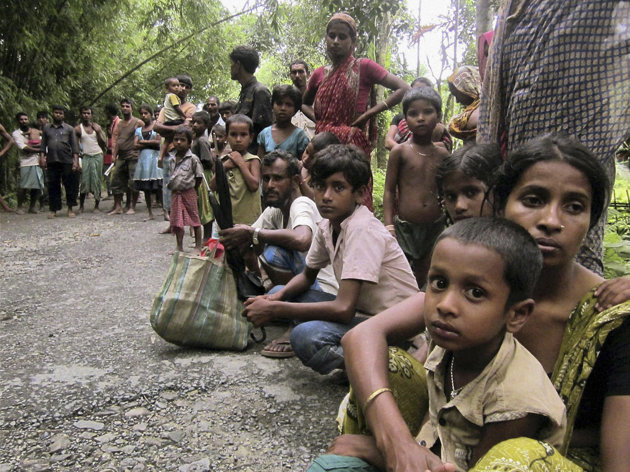 Rioting between Bodo tribes people and Muslim settlers has raged for days in a region near Bangladesh. Some victims died of machete wounds, said aid workers who has seen the bodies.

"More and more villages are being burnt by attackers this evening. Violence started again in the evening after a brief lull," said a district civil servant, who asked not to be named.

Earlier on Tuesday, hundreds of men armed with spears, clubs and rocks attacked an express train passing through Kokrajhar, injuring several passengers. In another incident, several people suffered bullet wounds and others were injured in a stampede when police fired to disperse a gang of 400, a senior police official said.

Soldiers and federal paramilitary troops patrolled Kokrajhar town and outlying areas on armored vehicles mounted with machine guns. Some police complained they were ill-equipped to deal with the riots, despite government assurances more security reinforcements were travelling to the region.

Rival mobs have spread to rural areas in three districts, targeting hamlets along river banks and in the jungle. About 500 villages have been destroyed by arson, said police.

Ringed by China, Myanmar, Bangladesh and Bhutan, India's northeast is connected to the rest of the country by a narrow land strip called the chicken's neck. Home to more than 200 ethnic and tribal groups it has been racked by separatist revolts since India's independence from Britain in 1947.

In recent years, Hindu and Christian tribes have vented strong anti-immigrant and anti-Muslim sentiment against Bangladeshi settlers. The Bodo tribe has clashed with Bengalis in deadly riots several times since the 1950s. Thirty years ago, about 2,000 people, mainly Muslims, died in riots in Assam.

The latest violence was sparked on Friday night when unidentified men killed four youths in Kokrajhar district, police and district officials said. In retaliation, armed Bodos attacked Muslims, suspecting them of being behind the killings.

Hagrama Mohilary, the leader of the tribal council governing the region, warned that former separatist rebels had joined the violence to protect Bodo villages. He called for the rebels, who are officially observing a ceasefire, to lay down their arms.

Bodo tribes shot at Muslim villages close to the border with Bhutan on Monday night, a senior police officer who asked not to be named told Reuters. He said no casualties had been reported.

Assam's chief minister, Tarun Gogoi, told TV network CNN-IBN he hoped the situation would be under control within two days. He said about 30,000 villagers have fled their homes and taken shelter in relief camps, but local officials said the numbers were at least twice that.

The main opposition Bharatiya Janata Party (BJP) criticized Gogoi for not stopping the rioting and Prime Minister Manmohan Singh called the chief minister asking him to do everything possible to halt the violence. The Hindu nationalist BJP has in the past been accused of fanning religious conflicts.

Tribal leader Mohilary said relief camps were overcrowded and short of food and medicine because roadblocks across the region had stopped supply trucks.