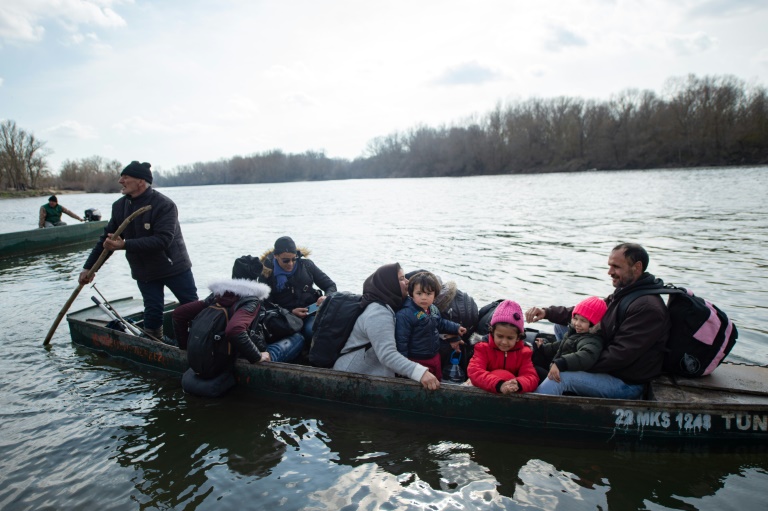 Top EU diplomats headed to Turkey on Tuesday amid concern over a fresh migrant crisis, as Austria accused Ankara of trying to “blackmail” the bloc by opening its borders to thousands of refugees seeking to flee to Europe.

Rights groups also slammed Turkey for using the refugees as a bargaining chip by pushing them towards the Greek border.

Thousands of migrants and refugees have arrived at Turkey’s border with Greece since President Recep Tayyip Erdogan announced last week that it would no longer stop them trying to enter Europe.

After fierce clashes with Greek police at the official border crossing over the weekend, migrants said they were being dispersed along the narrow Evros river that separates the two countries.

Braced against the winter cold, many wandered the fields along the water’s edge looking for a safe space to cross.

They have faced tear gas and stun grenades from Greek police, while unconfirmed videos appeared to show coastguards beating and shooting near migrants packed on to boats.

One Afghan migrant, 21-year-old Sinan Yilmaz, said a friend had managed to reach Greek soil, but was quickly picked up by police.

“They took everything: their money, their shoes, and sent them back here. That’s why we don’t consider it, unless the doors open,” he said.

“It has become something allowed from our Turkish side. In the past we used to get them across for $200 or $300 per person and now we do it for $15,” said one people smuggler, who gave his name as Semih.

Erdogan claims “millions” of refugees could soon be heading from Turkey into Europe, but this is widely seen as a bid to pressure EU leaders into supporting his military offensive in Syria.

Turkey already hosts some four million refugees and faces another huge influx from Syria where the regime, backed by Russian air power, is pressing a violent offensive to retake the last rebel-held province of Idlib.

EU High Representative Josep Borrell and Commissioner Janez Lenarcic will spend two days in Turkey for “high-level” meetings on the Syrian crisis and the migrant row.

European leaders have insisted Turkey abide by a 2016 deal to stop migrant departures in exchange for six billion euros in assistance.

Re-opening the door for migrants “is an attack by Turkey against the European Union and Greece,” said Austrian Chancellor Sebastian Kurz. “People are being used to pressure Europe.”

Rights groups meeting in Istanbul on Tuesday said: “Migrants should not be used as a negotiating tool and the government should stop directing them to unsafe crossing points.”

But they also criticised Europe for “endangering the lives of hundreds of thousands of migrants” by closing its borders.

Tensions have soared over the past week in Syria’s northwestern Idlib province — where Ankara backs certain rebel groups and has military observation posts — after 34 Turkish soldiers were killed in an air strike blamed on Damascus.

Close to one million people have been forced to flee the Syrian government’s assault in the biggest wave of displacement of the nine-year conflict, but they are not currently allowed to enter Turkey.

Erdogan said Monday he hopes for a fresh ceasefire when he meets his counterpart Vladimir Putin in Moscow on Thursday.

Meanwhile, EU foreign ministers will meet on Thursday and Friday in Zagreb to discuss the situation in Idlib and at the Greek border, with Athens saying it expects “strong” support from Brussels.

Erdogan said Monday he had rejected an extra one billion euros in aid, without specifying who made the offer.

“We don’t want this money,” Erdogan said a news conference.

Image: Migrants say they are being dispersed along the narrow Evros river that separates Greece and Turkey (AFP/File/Yasin AKGUL)