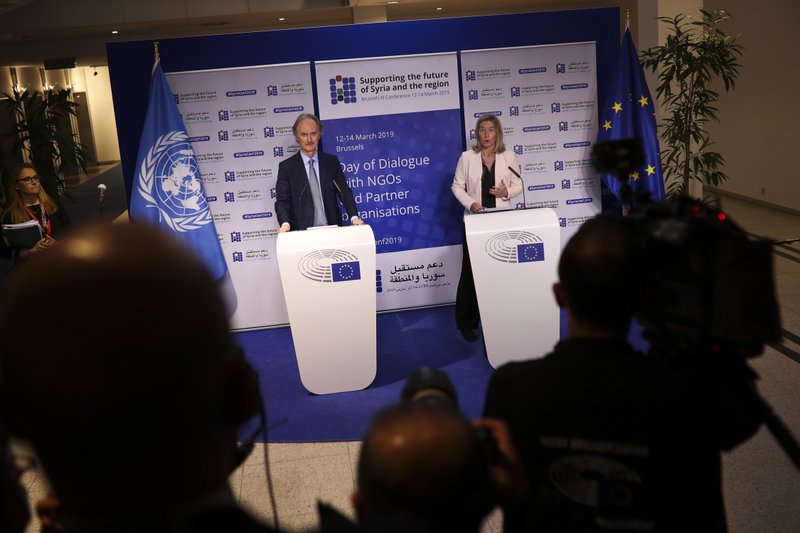 BRUSSELS (AP) — The European Union’s top diplomat says the EU expects “significant pledges” for Syria at a donor conference, as the bloc seeks to keep the 8-year conflict in the international spotlight.

Speaking ahead of Thursday’s donor conference in Brussels, foreign policy chief Federica Mogherini said that Syrians must “not to be forgotten in a moment where the international community seems to care a little bit less about this.”

Around 55 countries and 80 delegations are expected to attend.

The U.N. says $3.3 billion is needed to help meet Syria’s aid needs, plus a further $5.5 billion to support countries like Jordan, Lebanon and Turkey, where many Syrians have sought refuge.

About 11.7 million Syrians still depend on aid and some 6 million people have fled the country.

Photo: European Union foreign policy chief Federica Mogherini, right, and UN Syria envoy Geir Pedersen talk to journalists at the European Parliament on the eve of the Syria donors conference, in Brussels, Wednesday, March 13, 2019. Top officials are warning that the crisis in Syria is not over and are calling for large-scale support for people in need on the eve of a major donor’s conference. (AP Photo/Francisco Seco)

Some 20,000 Iraqis could return from Syria in weeks: Red Cross