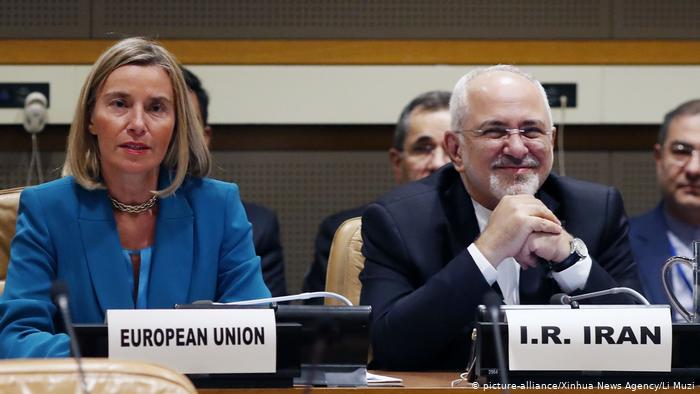 It ain’t easy being Brussels, the broker and bodyguard of the beleaguered Iran nuclear deal that US President Donald Trump wants dead.

In an effort to not just depart from but destroy the 2015 Joint Comprehensive Plan of Action (JCPOA), Washington has been threatening to sue European companies if they do business with Iran as allowed under the agreement. Iran is threatening to beef up nuclear enrichment activities in 60 days if they don’t.


Don’t expect any bureaucratic dramatics from the EU based on these threats. “While we do not accept any ultimatum,” said a senior EU official speaking on condition of anonymity, “Iran’s announcements are not a violation or a withdrawal of the nuclear deal. We will continue to abide by our commitment as long as Iran does.”

Read more: Iran nuclear-deal crisis: Is war with the US ahead?

Whether and how far Iran is planning to push that envelope will only be learned through the regular monitoring of the International Atomic Energy Agency (IAEA), whose next report is due in a couple of weeks. The last 14 assessments have given Iran a thumbs up.

But with US sanctions threatening at every turn, it’s unclear whether Europe — or the other partners, China and Russia — will be able to increase its trade with Iran enough to satisfy the regime. And what happens then?

Ellie Geranmayeh with the European Council on Foreign Relations told DW she doesn’t think the deal is in its mortal throes yet because it’s not in anyone’s interest to let it fall apart. Geranmayeh was an adviser to European governments and companies during the negotiations on the agreement. She said she sees this move by Iran as “pressure escalation, a warning shot while not violating the deal in a significant way.”

Iran feels like it’s complied fully and has not won the economic benefits it was assured, Geranmayeh explained. “[Tehran is] hoping that the minimum the Europeans can do is operationalize the INSTEX mechanism” designed to allow payments for goods without triggering US sanctions. That process has been underway for a year and is nearly operational, officials say, but not yet.

At the same time, Geranmayeh acknowledged, the deadline given by Tehran is problematic because there’s the risk if it’s not met, Iran will have to follow through. The EU can’t let Iran re-energize its nuclear capabilities, she underscored, so “at some point [Iran] will hit the red lines of the Europeans if this continues.”

On the other hand, she suggested, the high-stakes gamble may be aimed at building up leverage to eventually have direct negotiations with the United States.

Read more: US military flare-up ‘would be a godsend to Iran hardliners’

Stuck in the middle with EU

The EU, meanwhile, is in a “terrible spot,” according to Jon Wolfsthal, a non-proliferation expert who served in the Obama administration, and he primarily blames the US for that.

“[T]his is a situation that none of us need to or should be in,” he insisted. “The Iran nuclear deal was working: Iran was complying with its terms, the Europeans were implementing it and the US was implementing it.”

But the Trump administration argued the agreement let Tehran off too easily on nuclear controls and that it should also curtail other Iranian behavior as well, such as ballistic missile development and support for proxy groups hostile to the US in the Middle East. After pulling the US out exactly a year ago, the US administration continues to do everything possible to break up the other five signatories, Britain, France and Germany, plus China and Russia.

“He doesn’t have a solution for how to get to a better deal but is now going to squeeze the Iranian regime as much as he can and put the Europeans in the middle,” Wolfsthal said, describing the behavior as nothing more sophisticated than “Hulk smash!”

Wolfsthal underscored that the administration’s aims are being circumvented by its own decisions.

“There are some European countries that, because of the lack of goodwill left with the United States, are going to openly side with Iran,” he predicted, “which is not a situation the United States wants to be in.”

Europe to US: Come back

Along those lines, the same day Iran made its announcements, an open letter from directors of 18 European think tanks was released that appeals to the US to rejoin the agreement.

It reads, in part, that “JCPOA supporters across the world should increase coordination to make sure that US sanctions do not hamper the economic stability and technical nuclear cooperation Iran needs to comply with the deal…Most importantly, JCPOA supporters in Europe and elsewhere should re-articulate the merits of the agreement to various US audiences – in the administration, Congress, the expert community and media – so it is clear that the only way to reap the full benefits of the JCPOA and build upon it is for the US to rejoin it.”

Axel Hellman, a policy fellow at the European Leadership Network, which helped coordinate the joint message over the last month, said while the Iranians had not taken the most dramatic course they could have, it’s still a potentially dangerous move.

“In Washington, a lot of people will point to this and say ‘well this is what we said all along, this is a bad deal, you can’t trust the Iranians, we need to take action’,” Hellman said.

It’s more unclear how it will play in Europe, he said. “So definitely the risk has gone up, but there is still time for diplomatic solutions.”

That is, as long as Tehran toes the lines on nuclear activity. Before Iran’s 60-day deadline will come the IAEA report and if it shows violations, the senior EU official assured, “we would react.”