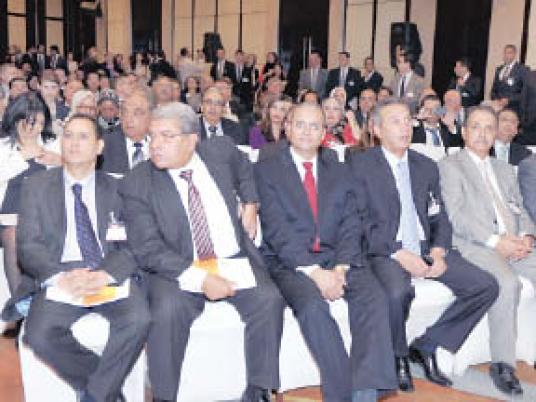 The 19th annual Euromoney conference will be held on 11 November in cooperation with Al-Masry Al-Youm. One of the biggest and most important economic conferences held in Cairo, the event will be attended by a wide range of economic officials, businessmen, as well as local and foreign investors.

This year’s conference comes against a backdrop of difficult economic conditions, provoking tough questions about the future of the Egyptian economy amid a rising budget deficit, falling international reserves and soaring inflation.

Egypt Independent put these questions to Euromoney emerging markets director Richard Bank, who discusses his predictions for the future of Egypt's economy.

Q: Explain the areas in which Euromoney works? And when did it start working in Egypt?

Euromoney’s operations are linked to a London-based, global investment organization that has been in the market for nearly 45 years and is registered on the London Stock Exchange. The organization holds international conferences within emerging markets that are concerned with investment and international finance, as well as other activities including research and development for world stock markets.

Euromoney has been in Egypt for the past 19 years. We held our first conference in September 1995. Since then, the events has been held annually, except for 2011 when the revolution broke out. This year’s conference, held on 11 November, is expected to be attended by nearly 1,500 Egyptian officials, local and foreign businessmen, as well as workers in several economic sectors.

Q: Why was Euromoney anxious to hold its yearly conference despite the difficult conditions at the Egyptian street?

This year’s event is more important than all the past conferences. International media has been covering developments in Egypt over the last period as a civil war, portraying the atmosphere as highly dangerous for any fresh investments.

This year’s conference is therefore looking to change that image to prove that Egypt still exists on the international field, is open to investments, and is enjoying a viable economy. The conference's importance also comes from the vitality of communication between the Egyptian state and the international community. International media has a big influence on the message being sent out abroad.

Q: In your view, why does Western media insist on giving this image of the situation in Egypt?

I do not believe in conspiracy theories. International media reports on all aspects of the situation and listens to all parties. Our role is to help media to report from a different angle. Life in Egypt is continuing, streets are crowded, and there is a high demand on all economic sectors: people still need infrastructure, healthcare and education. Therefore, investment opportunities which Egypt can secure are plentiful.

Q: How do you evaluate the impact of Euromoney over the past years?

Euromoney conferences have been held in Egypt for 19 years. They reflect the economic situation and prospects available to local and foreign investors. The world now views Egypt as a highly risky place. I and my friends, however, do not see any problem in Egypt other than traffic congestion. Euromoney will help correct that perception.

Q: How has Euromoney been a help to the Egyptian economy?

Euromoney is part of an integrated system. But that benefit could be gauged through private sector sponsors, distinguished attendances, special media coverage. Investors expect it every year and are eager to take part in it.

We have been anxious throughout this year in Egypt to focus on sectors in need of support and growth. That is reflected in the agenda of this year’s conference, which is more concerned with tourism, energy, aviation, real estate development, transportation, logistics and stock markets that can enable the Egyptian economy to achieve a growth rate of six percent.

Q: Do you believe Egypt is on the brink of a major economic crisis?

My reply to that question is no, and I say it very confidently. Egypt has indeed been in an economic crisis for two and a half years. I think the consequences of that crisis will persist for three or four years to come. However, all signs confirm that Egypt’s economy will rebound. Recently, Egyptians failed to provide any assistance to their economy. That said, they still have many political and economic reforms ahead. Egypt is a major, influential country, and things can’t get worse than present. So, the economy will not collapse.

In the short term, Gulf aid has managed to put the 14-percent budget deficit under control, pushing the wheel forward. Yet, that will not remain the case if it is still done away from international organizations. As we may know, those organizations impose terms and controls in return for aid. But for the time being, those conditions will not be applicable in Egypt, which means Egypt cannot get funding from those organizations.

On the longer term, speaking of the next five years, the government needs to further control the budget deficit through means other than borrowing, such as reducing public expenditure and increasing economic growth.

Q: What should the government do currently in order to control the economic situation?

The government should concentrate on reinvigorating the economy through immediate, decisive measures. The current government is already doing that by reopening closed factories, boosting exports, reducing bureaucracy that impedes investments. The government is adopting a short-term plan that seeks to grow local investments and attract investors, which can help revive the economy.

Q: Do you believe that investments in Egypt might be withdrawn in favour of other countries?

When we speak about direct foreign investments, we have to realize that those investments were designed in away that matches the conditions and advantages of the Egyptian market, and that’s why they cannot be transferred to other countries. Investors do not take hasty decisions, but rather adopt them after a lot of consideration. But new investments are the ones that can be impacted. I believe that by September, things will get better and investments will start to flow.

But we still have to stress that foreign investments always follow local investments. Then, the Egyptian government is required to encourage Egyptian investors, a step that can have a positive impact on direct foreign investments. There is another factor that should be considered in that respect, which is related to the investment vision of some European and American companies that have started to adopt deflationary policies, compared to their expansionary policies five years ago. Those companies seek to scale down their activities in light of the last financial crisis, which, of course, impacts the amount of investments directed to Egypt and other world markets.