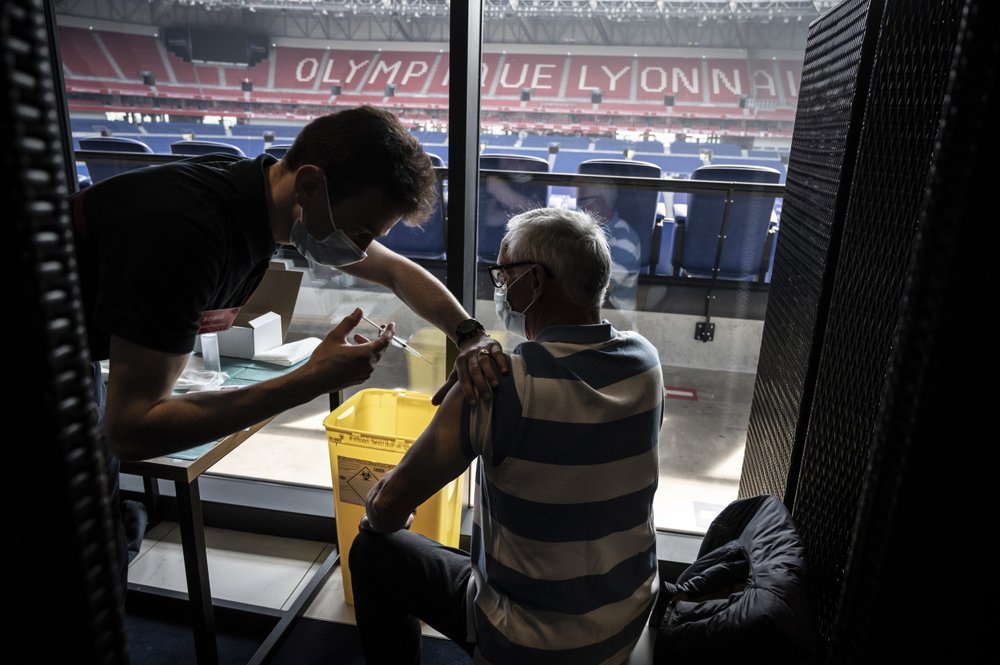 PARIS (AP) — The main stadium in the French city of Lyon opened as a mass vaccination center during Easter weekend, and thousands of people spent the holiday lining up for injections elsewhere in France as the government tried to speed up shots amid a new rush of coronavirus cases.

But as Europe faced its second Easter in a row under the cloud of the pandemic, some French cities pushed back against President Emmanuel Macron’s insistence that “there are no weekends or days off during vaccination.”

Authorities in Strasbourg, on the German border shut down their vaccination facilities from Good Friday through Easter Monday — a public holiday in France — to allow workers “a little rest at last,” according to a city official. To ensure that residents still had access to potentially life-saving vaccines, the city expanded vaccination hours and administered all of its its weekly supply of doses between Monday and Thursday.

The city of Sarcelles north of Paris was among those where officials kept vaccine sites open Sunday amid mushrooming infections and demand.

The surrounding Val d’Oise region now has the highest coronavirus infection rate in France, and the situation in Sarcelles symbolizes how the pandemic has worsened existing inequality.

The city’s working class residents have higher exposure to the virus because many can’t work remotely. In the area’s housing projects, many families have multiple generations living in close quarters. Language barriers make sorting out vaccination arrangements a challenge for many immigrants.

In Lyon, French first division soccer club Olympique Lyon opened its stadium and provided 200 volunteer employees to help medical personnel and firefighters with a mass vaccination drive that started Saturday. Authorities expect 3,000 vaccinations per day to be given at the stadium during the first three days.

In Italy, vaccinations went forward on Easter Sunday and were planned for Monday, a national holiday.

The accelerated Easter actions stand in contrast to the slow beginning of Europe’s vaccine rollout during the end-of-year holidays.

While France remains behind Britain and the United States in terms of vaccinating its population, the pace is starting to pick up. France has administered 12 million vaccine doses overall, including nearly 1 million in the last three days, according to government figures.

France has reported one of the world’s highest reported COVID-19 death tolls at 96,280 people and the highest number of confirmed cases in Europe.

Image: Patients receive an injection of the Moderna Covid-19 vaccine on the opening day of a mass vaccination centre set up in the Olympique Lyonnais soccer Stadium, in Decines-Charpieu, Saturday, April 3, 2021. (Jean-Philippe Ksiazek, Pool via AP)

AstraZeneca shots halted in parts of Germany for under-60s