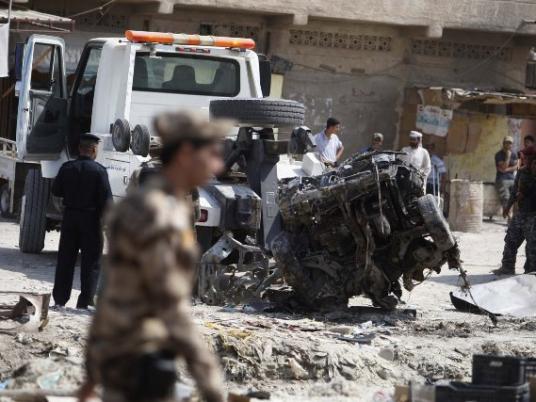 BAGHDAD — At least 58 people were killed in attacks across Iraq on Sunday, including a car bomb outside a French consulate.

Iraq's conflict has eased since its height in 2006-2007 when sectarian slaughter killed thousands. But Sunni Islamists and an al Qaeda affiliate still launch about one major attack a month in an effort to reignite tensions between Shia and Sunni Muslims following the US military withdrawal in December.

The most serious of the bombings, blasts and shootings on Sunday happened near the city of Amara, 300 km (185 miles) south of Baghdad, when two car bombs exploded outside a Shia shrine and a market place, killing at least 16 people, officials said.

"So far 16 corpses were brought to the hospital, and more than 100 people were wounded," said Sayid Hasanain, a local health official.

With its main hospital overflowing with injured from the attacks, mosques in Amara used prayer loudspeakers to call for blood donations.

Later on Sunday, a car bomb killed eight people queuing for jobs as police guards for the Iraqi North Oil Company in the flashpoint city of Kirkuk, 250 km north of Baghdad, police said.

Kirkuk was hit by several other blasts. A car bomb and a bomb packed into a motorcycle detonated outside a crime investigation office, killing seven and wounding 40.

More people were killed in several other blasts across the country, including in the towns of Baquba, Samarra, Basra and Tuz Khurmato.

The car bomb that exploded outside the French consular building in the usually stable city of Nassiriya, 300 km south of Baghdad, killed a police guard and wounded four other guards, authorities said. The consul, an Iraqi citizen, was not at the office at the time of the attack.

Two other people were killed and three wounded by a separate car bomb in the city.

French diplomats have been hit before by violence in Iraq.

Since the last U.S. troops left, insurgents have often hit high-profile targets, including Shia religious sites or local military or government offices, to show they can still carry out coordinated attacks and undermine the government's claim to provide security.

Iraq's local Al-Qaeda wing, Islamic State of Iraq, has claimed responsibility for other major attacks on security forces and Shia neighborhoods. But former members of Saddam Hussein's outlawed Baathist party and other Sunni Islamist groups are also fighting the government.

Infighting in Iraq's delicate cross-sectarian government, and a resurgence of the al Qaeda wing, have raised fears of a return to widespread violence, especially as Iraq struggles to contain spillover from the growing conflict in Syria.