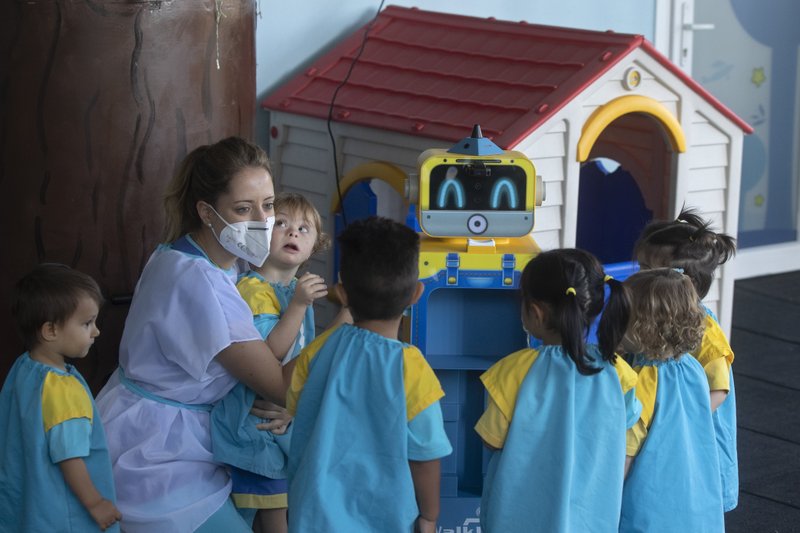 BARCELONA, Spain (AP) — Ángela López hardly fits the profile of a rule-breaker. But the mother of a seven-year-old girl with respiratory problems has found herself among parents ready to challenge Spanish authorities on a blanket order to return to school.

They are wary of safety measures they see as ill-funded as a new wave of coronavirus infections sweeps the country. They fear sick students could infect relatives who are at higher risk of falling ill from COVID-19. And they claim that they have invested in computers and better network connections to prepare for online lessons, even preparing to homeschool their children if necessary.

Many of the defiant parents, including López, are also ready to stand up to the country’s rigid, one-size-fits-all rule of mandatory in-school education, even if that means facing charges for truancy, which in Spain can be punished with three to six months in prison.

Her daughter was born with a condition that makes her prone to suffer episodes of bronchial spasms, which can cause difficulty breathing. With COVID-19 affecting the respiratory system, López doesn’t want to take any risks.

“We feel helpless and a little offended. It’s like they force us to commit an illegal act because they don’t give us a choice,” said López, who lives in Madrid.

“It’s a matter of statistics,” she added. “The more cases there are, the more likely you are to catch it.”

More than half a million people have contracted the virus in Spain and at least 29,500 have died with it, although the official record leaves out many who perished in March and April without being previously tested.

With an average of 229 new cases per 100,000 inhabitants over the past two weeks, Spain currently has the highest rate of contagion in western Europe. Within the region, it leads what many experts are already calling a second wave of the pandemic, although the Spanish government insists that it now identifies most of the infections because it’s testing more and better.

Officials also say that more than half of those infected now show no symptoms, which explains why hospitals that struggled at the peak of the epidemic in spring are seeing fewer COVID-19 patients this time.

The Ministry of Health has also recommended setting up so-called “bubble-classrooms” where a reduced number of students interact only among themselves, and “COVID coordinators” in every school who can react quickly if an outbreak is identified.

But many parents say funding is insufficient to hire more teachers and that some schools just don’t have additional space. They also see an inconsistency in authorities allowing up to 25 children in classrooms while banning large meetings of people or imposing curbs on nightlife in response to surging contagion. In Madrid, those restrictions have been expanded even to private homes, where no gatherings of more than 10 relatives or friends are allowed.

Over eight million students in Spain are beginning the academic year this week or next, with the starting date varying in each of its 17 regions and according to education levels.

Although scientists are still studying the role children play in spreading COVID-19, younger children appear less infectious than teenagers. Children mostly suffer only mild infections when they catch the virus, but in rare cases they can get severe illness and studies have shown they can transmit COVID-19 to others in their households, including their parents.

Aroha Romero, a mother of two from the eastern region of Valencia, said the lack of clarity increases her anxiety.

“I would rather be threatened (to be charged with absenteeism) than have my children be motherless due to the coronavirus,” she said

Lorenzo Cotino, a law professor at the University of Valencia who has studied the impact of legislation in education, noted that schooling is widely supported in Spain since a 1970 law made physical attendance mandatory, reducing social divisions.

The pandemic has reinforced the idea that “equality and schooling go hand in hand,” Cotino said, because “children in marginalized groups with less internet access received a poorer education at home.”

The families contesting the status quo say Spain’s constitution gives them freedom to keep their children away from school. But there is neither a legal umbrella for homeschooling, nor is there a system that sets standards for studying at home.

The situation is similar in Germany, where homeschooling is illegal, although there has been enthusiasm there about the return to schools, and in Britain, where very high attendance rates followed last week’s reopening. The British government has pledged to only fine parents not sending their children back as a “last resort.”

Even in European countries where homeschooling is allowed, the practice is not as widespread as in the United States. A longstanding distance learning system for all ages exists in France but parents can also choose to privately educate their children.

French education authorities say it’s too early in the academic year to identify if the coronavirus is driving a homeschooling trend.

In Spain, Prime Minister Pedro Sánchez has warned of a “risk of social exclusion for not returning to school.” And although he said there is “no such thing as zero risk,” he said both students and teachers “will be much safer in educational centers than in other places.”

His education minister, Isabel Celaá, has acknowledged that a number of students will miss the return to school for medical reasons. But stressing the existing punishment for absenteeism, she said last week that in-school learning “cannot be replaced by homeschooling.”

Irene Briones, a law professor at Madrid’s Complutense University, said that “if truancy numbers increase massively, nothing will happen” because “it’s not in the government’s interest” to go against large numbers of parents.

When Spain went into a strict three-month lockdown last spring, millions of students were forced to finish school from home and parents suddenly became teachers. Online classes helped a great deal and set the path towards a new way of learning in COVID-19 times, families said.

The demand now is that online education becomes standardized with an official digital learning program that will help students keep up with the coursework at least through December, during the first trimester of the academic year. They also say that laptops and other equipment should be handed out to narrow the technology divide between families.

“We will defend ourselves using all legal tools and arguments” if authorities and families don’t reach an agreement, says Josu Gómez, whose Safe Return to School association has enlisted nearly 1,500 families in three weeks. A further 250,000 people have signed in two months a Change.org petition to demand safety measures for kids and teachers in classrooms.

But some are ready to face whatever consequences may come. Romero, the mother of two from Valencia, insisted her kids will stay home as long as infection numbers don’t go down.

“If adults can work from home, kids can study from home,” she said.

AP writers Aritz Parra in Madrid, Angela Charlton in Paris, Pan Pylas in London and David Rising in Berlin contributed to this report.

Image: A firefighter battles the Creek Fire as it threatens homes in the Cascadel Woods neighborhood of Madera County, Calif., on Monday, Sept. 7, 2020. (AP Photo/Noah Berger)

Experts warn Spain is losing the 2nd round in virus fight