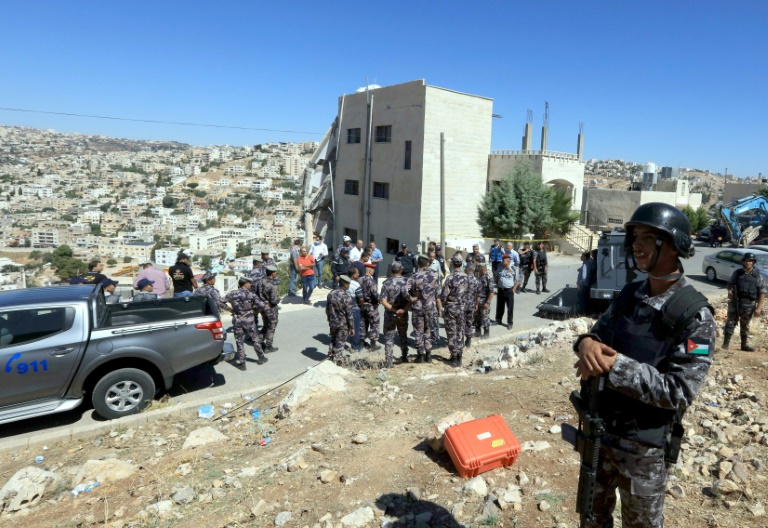 Four members of the Jordanian security forces and three “terrorists” have been killed during a raid on a militant hideout after an officer died in a bomb blast near the capital, the government said Sunday.

Five suspects were also arrested during Saturday’s raid in connection with the home-made bomb that exploded under a patrol car at a music festival.

A joint unit of special forces, police and army troops raided a house in the town of Salt northwest of Amman in search of a suspected “terrorist cell”, government spokeswoman Jumana Ghneimat said.

She said the militants were sought in connection with Friday night’s bombing that killed a police sergeant and wounded six others in the town of al-Fuhais west of Amman.

“The suspects refused to surrender and opened heavy fire toward a joint security force,” Ghneimat said on Saturday.

They also “blew up the building in which they were hiding, and which they had booby-trapped earlier”, she added.

Three members of the security forces were killed in the shootout with the gunmen who were holed up in an apartment in a four-storey residential bloc in Salt, she said in a statement.

A fourth who was critically wounded died of his injuries on Sunday, she added.

The bodies of three “terrorists” as well as automatic weapons were found under the rubble of the building, and a total of five militants were arrested during the operation, Ghneimat said.

Bomb blasts targeting security forces are rare in Jordan, although the small desert kingdom bordering Syria and Iraq has had to struggle with a rise in Muslim fundamentalism in recent years.

There was no immediate claim of responsibility for Friday’s bomb blast in al-Fuhais, a mostly Christian town, and the identities of the suspects were not known.

“A clean-up operation is still under way,” Ghneimat said, adding that units of the civil defense were at the scene to assess the damage at the building and sift through the rubble.

Ghneimat urged civilians to stay away, warning that “it could totally collapse at any minute”.

An excavator was later seen demolishing the structure.

Medical sources said that 11 people were wounded during the raid, including members of the security forces and civilians who were residents of the building where the militants were hiding.

Women and children were among those hurt, they said, without giving further details.

Ambulances, bulldozers and police cars were deployed around the building in the Naqab al-Dabour residential neighbourhood in Salt, television footage showed.

The government set up a crisis cell to follow the developments, the state-run Petra news agency reported.

Prime Minister Omar al-Razzaz, who chaired the meeting, vowed Saturday that Jordan would “not be complacent in the hunt for terrorists”.

Jordan has played a key role in the US-led coalition fighting the Islamic State group in Syria and Iraq, using its air force against the jihadists and allowing coalition forces to use its bases.

The kingdom was hit by a string of attacks in 2016, including a shooting rampage claimed by IS that killed 10 people including a Canadian tourist in Karak, known for its Crusader castle.

The United States “strongly condemned” the attacks against Jordanian security forces in Al-Fuhais and in Salt, in a statement released Sunday by its Amman embassy.

“The United States stands in solidarity with Jordan in the face of these terrorist actions and emphasizes our shared resolve to counter the plague of terrorism,” the statement said.