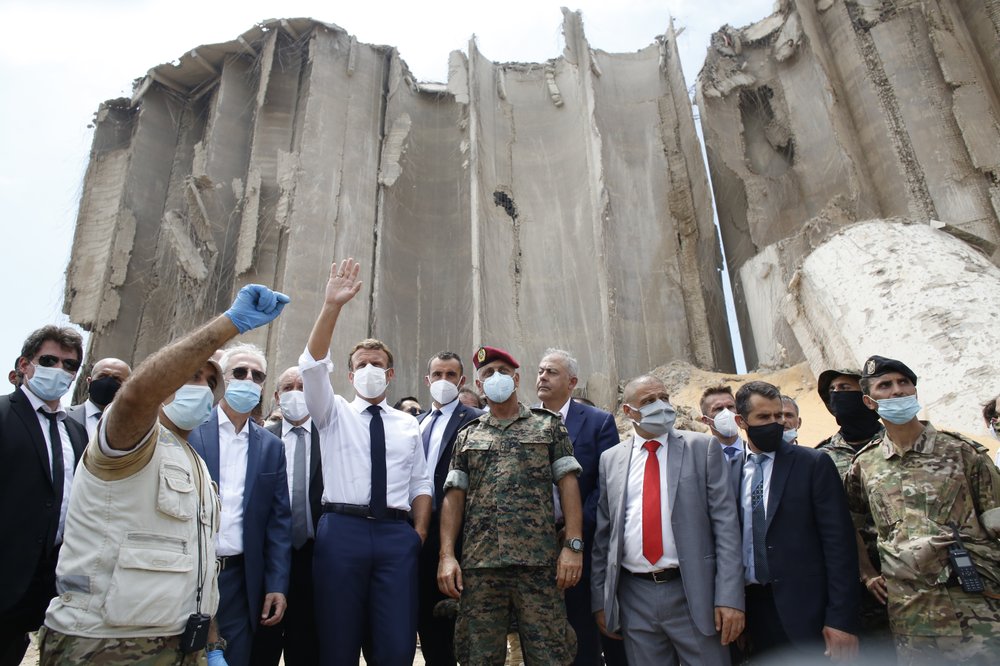 BEIRUT (AP) — During his visit this month, French President Emmanuel Macron gave Lebanon’s politicians a road map for policy changes and reform, set deadlines for them to take action and told them he’d be back in December to check on progress.

It was a hands-on approach that angered some in Lebanon and was welcomed by others. And it revived a bitter question in the tiny Mediterranean country: Can Lebanese rule themselves?

Lebanon’s ruling class, in power since the end of the civil war in 1990, has run the tiny country and its population into the ground. Heading a sectarian system that encourages corruption over governing, the elite have enriched themselves while investing little on infrastructure, failing to build a productive economy and pushing it to the verge of bankruptcy.

Anger over corruption and mismanagement has come to a peak after the giant Aug. 4 explosion at Beirut’s port, caused by the detonation of nearly 3,000 tons of ammonium nitrate that politicians allowed to sit there for years. Nearly 200 people were killed and tens of thousands of homes were damaged. Another large fire erupted at the port on Thursday, only further traumatizing and frustrating Beirutis.

Poet and journalist Akl Awit wrote in An-Nahar newspaper that he strongly opposes outside interference, but the political elite brought it on themselves.

“This is a class that does not care about law, constitution, judiciary, morals, conscience, earthquakes or even about bankrupting people,” he wrote. “This class only wants to stay in power … (It) understands only the language of the rod.”

Some worry that even outside pressure cannot force reform on politicians, for whom reform means an end to power and perhaps eventual accountability.

“They are known to give empty promises whether to their people or the international community,” said Elias Hankash, a legislator from the right-wing Kataeb party who resigned from parliament following the port explosion. “Regrettably maybe President Macron does not know whom he is dealing with.”

Resistance to reform can be startling. In 2018, a France-led conference pledged some $11 billion in aid to Lebanon. But it came with conditions of reforms, including audits and accountability changes that could have hurt the factions’ corrupt patronage engines. Politicians were unable to pass the reforms to unlock the desperately needed money.

Late last year, Lebanon’s economic house of cards collapsed into its worst financial crisis in decades. The local currency has crashed, throwing more than half the country’s 5 million people into poverty.

In his Sept. 2 visit, Macron came in with a strong push for change. He met with officials from the eight largest political groups. They were given a so-called “French Paper, which lay out what it called a “draft program for the new government” on everything from how to deal with the coronavirus, to investigating the port explosion, rebuilding the port, fixing the electricity sector and resuming talks with the International Monetary Fund.

It reminded many of the nearly three decades when Syria dominated Lebanon — particularly of Rustom Ghazaleh, the late Syrian intelligence general who ran day-to-day affairs in the country and would often summon its politicians to his headquarters in the border town of Anjar. Syria’s domination ended in 2005 after nationwide protests broke out following the assassination for former Lebanese Prime Minister Rafik Hariri.

During those years, Syrian intelligence agents were known to drive around Beirut and Lebanon in French-made Peugeot cars. One meme that circulated on social media after Macron’s visit showed photos of him and Ghazaleh grinning over a Peugeot. “This time, the owner of the car factory himself came. The big boss came to form a government,” it read.

On Wednesday, authorities met one key demand by Macron, launching a forensic audit into Lebanon’s central bank to know how billions of dollars were wasted.

But already, there appear to be delays in negotiating a new Cabinet, despite a Monday deadline that Macron said Lebanese politicians agreed on to form the government. In the past it has taken months to form governments as factions bargain over who gets which ministries.

Joe Macaron, a fellow at the Arab Center in Washington, said France is not in the position Syria once had to dictate policies — there are other outside players to take into account.

“The French role largely depends on the cooperation of both the U.S. and Iran,” he said.

Since 2005, Lebanon’s politics have been divided between a U.S.-backed coalition and another supported by Iran and Syria led by the militant Hezbollah. Disagreements sometimes led to street clashes — but they always managed to agree on splitting financial gains.

On Tuesday, the U.S. Treasury imposed sanctions on two former Lebanese ministers allied with Hezbollah for their links to the militant group. It also said both are involved in corruption.

While some Lebanese criticize Macron’s interference, others yearn for the days when Lebanon was a French protectorate after World War I until independence in 1943. More than 60,000 signed a petition after the blast to return to French mandate for 10 years. Macron dismissed the idea.

Since the port blast, international officials, including Macron, Italy’s prime minister and Canada’s foreign minister have visited and called on the government to implement reforms to receive financial assistance. Many dignitaries toured the Beirut neighborhoods most damaged in the blast, something no senior Lebanese official has done, apparently fearing residents’ fury.

“The only state that is not interfering in Lebanon’s affairs is the Lebanese state,” goes one joke making the rounds.

Hankash, the lawmaker who resigned, said the ruling class has “shown they cannot run the country on their own. (It) has proven to be an immature authority that needs guardianship.”

In mid-October, tens of thousands of Lebanese joined nationwide protests that tried — but so far failed — to end their grip on power.

Macaron, of the Arab Center in Washington, said corruption will continue unless there is real reform.

“Preventing the oligarchy from running the show seems wishful thinking at this point unless the Lebanese people defy the odds by forcing a new reality.”

FILE – In this Aug. 6, 2020, file photo, French President Emmanuel Macron, center left, gestures as he visits the devastated site of the explosion at the port of Beirut, Lebanon. In the wake of Beirut’s massive port explosion, Macron has taken a tough line, setting deadlines for Lebanon’s politicians to carry out reforms. His hands-on approach has angered some in Lebanon and brought praise from others. (AP Photo/Thibault Camus, Pool, File)

Huge fire breaks out at Beirut port a month after explosion