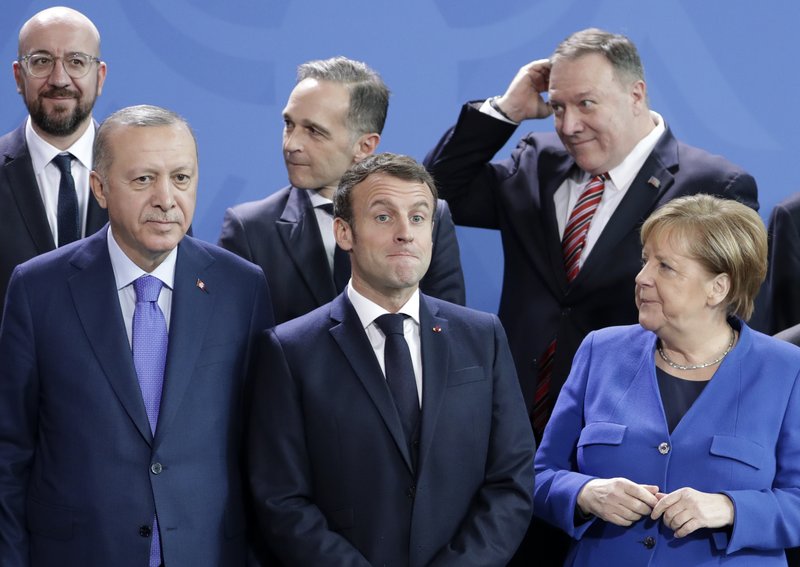 BRUSSELS (AP) — The festering dispute between France and Turkey over a naval standoff in the Mediterranean Sea has shone a glaring searchlight on NATO’s struggle to keep order among its ranks and exposed weaknesses in a military alliance that can only take action by consensus.

The dispute has also revealed NATO’s limits when its allies are or are perceived to be on different sides of a conflict — in this case in Libya — especially when a major nuclear ally like France has lamented the “brain death” at the world’s biggest security organization due to a lack of American leadership.

According to French accounts of the June 10 incident in the Mediterranean, the French frigate Courbet was illuminated by the targeting radar of a Turkish warship that was escorting a Tanzanian-flagged cargo ship when the French vessel approached.

France said it was acting on intelligence from NATO that the civilian ship could be involved in trafficking arms to Libya. The Courbet was part of the alliance’s operation Sea Guardian, which helps provide maritime security in the Mediterranean.

In a power-point presentation to French senators on Wednesday, which angered the French officials, Turkey’s ambassador to Paris, Ismail Hakki Musa, denied that the Courbet had been “lit up” by targeting radar and accused the French navy of harassing the Turkish convoy.

He also suggested that a NATO probe into the incident was “inconclusive” and that France had pulled out of Sea Guardian. The French defense ministry rushed to release its version of events and underline that it would not take part in the operation until the allies had recommitted to the arms embargo on Libya, among other demands.

NATO headquarters refused to provide details saying the report is “classified,” and it’s unlikely that its findings will be made public. A French diplomat said the investigators probably did the best they could, given that they were provided with two very different versions of what happened.

“We have proven this with reports and documents and gave them to NATO. NATO saw the truth,” Cavusoglu said. “Our expectation from France at the moment is for it to apologize in a clear fashion, without ifs or buts, for not providing the correct information.”

On Monday, French President Emmanuel Macron had accused Turkey of flouting its commitments by ramping up its military presence in Libya and bringing in jihadi fighters from Syria.

“I think that it’s a historic and criminal responsibility for a country that claims to be a member of NATO,” Macron said. “We have the right to expect more from Turkey than from Russia, given that it is a member of NATO.”

It’s not the first time Turkey has been at the center of controversy at NATO. Ankara’s invasion of northern Syria last year angered its allies, while its purchase of Russian-made missiles, which NATO says would compromise allied defense systems, got Turkey kicked out of the F-35 stealth fighter program.

Despite concerns about its direction and close ties with Russia — NATO’s historic rival — Turkey can’t be ejected from the military organization. Legally, there is no mechanism, and decisions require the unanimous agreement of all 30 member nations. In any case, NATO insists that Turkey is too strategically important to lose.

In normal times, the United States — by far the most powerful and influential of the allies — could be expected to bring its partners into line. But the last four years, with President Donald Trump at the helm in the US have been extraordinary times for NATO.

Trump has publicly berated European allies and Canada for not spending enough on defense budgets. He has pulled out of the Iran nuclear agreement, the Intermediate-Range Nuclear Forces Treaty and the Open Skies aerial surveillance pact, which the Europeans regard as important to their security.

Just after Turkey invaded Syria, Trump announced that he was pulling US troops out, surprising and angering his allies. In recent weeks, he’s threatened to take American troops out of Germany, again without consultation.

At the heart of the France-Turkey quarrel is the question of whether NATO allies should respect the UN arms embargo for Libya. NATO Secretary-General Jens Stoltenberg said last month that the alliance “of course supports the implementation of UN decisions, including UN arms embargoes.”

But in a interview on Tuesday, former UN Libya envoy Ghassan Salame said just after a Berlin conference in January where countries again backed the Libyan arms embargo, he saw pictures of weapons shipments showing that even Security Council members were sending “ships, planes and mercenaries” there.

With no firm US guiding hand, divisions among the allies over how Libya should be handled, and a decision-making process that requires everyone to agree — even on what they should talk about — it’s difficult to see when NATO might debate the embargo question in earnest.

Image: FILE – In this Sunday, Jan. 19, 2020 file photo, German Chancellor Angela Merkel, front right, speaks with French President Emmanuel Macron, front center, and Turkish President Recep Tayyip Erdogan during a group photo at a conference on Libya at the chancellery in Berlin, Germany. A festering row between France and Turkey over a naval standoff in the Mediterranean Sea has shone a glaring searchlight on NATO’s struggle to keep order among its ranks and exposed weaknesses in a military alliance that can only take action by consensus. (AP Photo/Michael Sohn, File)

UN chief tells Libya’s Hifter there is no military solution