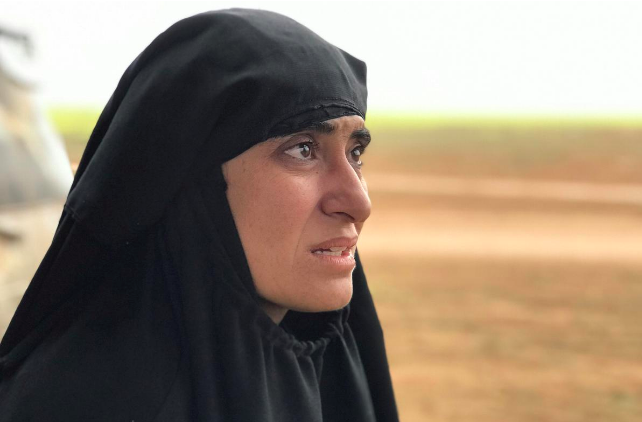 Salwa Sayed al-Omar spent years as a Yazidi prisoner of Islamic State but she escaped its clutches this week, fleeing its last populated enclave in east Syria along with two Iraqi boys pretending to be her brothers.

Islamic State overran the Yazidi faith’s heartland of Sinjar in northern Iraq in 2014, forcing young women into servitude as “wives” for its fighters and massacring men and older women.

The Yazidis are a religious sect whose beliefs combine elements of several ancient Middle Eastern religions. Islamic State considers them devil worshippers and its attacks on the group were condemned as a “genocide” by the United Nations.

“They took women, abused them and killed them,” said Omar, describing how jihadists bought and sold their Yazidi captives or passed them around as sexual slaves.

“A woman was shifted from one man to another unless it was to one who had a bit of mercy… if she was in good condition, she would carry on. If not, she would get married to avoid being abused,” she said.

Omar was eventually married to a Tajik jihadist.

As the US-backed Syrian Democratic Forces (SDF) besieged the enclave at Baghouz, some surviving Yazidi women and children emerged among many thousands of others fleeing deprivation and bombardment, including the group’s own unrepentant supporters.

The SDF is waiting to evacuate all civilians from the Baghouz enclave before forcing the remaining jihadists there to surrender or storming the tiny area by force.

Omar escaped along with two Iraqi children, Mustafa and Dia, who had been her neighbors for two years as their respective households moved through Syria together during Islamic State’s long retreat to Baghouz.

As Islamic State’s many enemies advanced against it, the group would move its captives from place to place. “They were hiding us in different places so we couldn’t be seen or helped,” Omar said.

Their Islamic State captors were “rigorous” in checking who left, said the teenage boys, Mustafa and Dia, who said they had stayed longer in the enclave to help Omar leave.

After a month of siege in the tiny pocket at Baghouz, a cluster of hamlets and farmland on the banks of the Euphrates at the Iraqi border, they were reduced to eating grass and hiding in holes when there was fighting, they said.

They all managed to get away from her “husband” by paying him money. Many Islamic State fighters remained in Baghouz as they left on Thursday, dug into tunnels under the area, the boys said.

Speaking in the desert outside Baghouz, where people who had left the enclave were searched, questioned and sorted between civilians and fighters, Omar spoke of how she had been captured.

“They took me from Iraq. They captured us on the road and said ‘we won’t do anything bad to you, but you must convert to Islam’. We were afraid to be killed so we converted,” she said.

It did not save them. After months of capture, the women were split from the men, whom she never saw again. Captured boys aged 7-15 were taken to be brainwashed and trained as Islamic State fighters, she said.

She was taken to Raqqa, the group’s Syrian “capital”, which fell to the SDF during Islamic State’s year of big defeats in 2017, and then down the Euphrates to Baghouz.

“Today I reached the democratic forces and they said ‘we will let you go out of the Islamic State’… and thank God, they helped me and let me out,” she said.