BEIRUT (AP) — A military offensive on an opposition-controlled region of northwestern Syria has created one of the worst catastrophes for civilians in the country’s long-running war, sending hundreds of thousands of people fleeing, many of them sleeping in open fields and under trees in freezing temperatures.

The military campaign in Idlib province and the nearby Aleppo countryside has also killed hundreds of civilians, and a bitter winter has compounded the pain.

The weather has contributed to at least 10 deaths, including four who suffered hypothermia, a family of four that died of suffocation in their tent and two who burned to death when their tent caught fire, according to Mohammed Hallaj, a coordinator for the area’s Response Coordination Group.

Nizar Hamadi, 43, lost his brother and three other family members, including a three-year old. Their family had been displaced multiple times to escape the swift government offensive, ending up in a settlement made up of rudimentary tents stitched together with sticks and cloth.

“It was God’s destiny that it was really cold. The temperatures was no less then -8 or -9 (degrees Celsius, 15 degrees Fahrenheit) and this is rare in Syria,” he said, speaking to The Associated Press from the Idlib town of Binnish.

He said his brother, Steif Abdel-Razak Hamadi, had moved north as Binnish also came under attack to set up his family’s next shelter in Killi. On Tuesday, he set up a coal heater and by nightfall, as the fire died down, he moved it inside the tent and went to sleep with his family including his wife, two children and his grandchild.

“For the whole night, the heater was sucking out all the oxygen in the tent,” Hamadi said.

When the son sleeping in another tent woke up and came to their tent, he found them all dead.

The government’s Russian-backed assault on Idlib, the Syrian opposition’s last stronghold, has uprooted more than 830,000 people since Dec. 1, most of them fleeing toward safer areas near the border with Turkey, U.N. spokesman Stephane Dujarric said Friday. At least 143,000 people have been displaced in the last three days.

“Humanitarian needs are increasing exponentially,” Dujarric said. “The ongoing emergency compounds the already dire humanitarian situation for people in the northwest, who have been made vulnerable by years of crisis, violence, economic downturn and, of course, multiple displacements,” Dujarric said.

Terrified families piled on trucks and vehicles, sitting on top of mattresses and blankets, clogging sludgy rural roads in harrowing scenes of exodus that have been recurrent in Syria’s conflict, now in its ninth year.

Around half the territory’s population had already been displaced from other parts of Syria, so formal camps are full.

“It’s cold, it’s snowing and our life is terrible, we can’t take this cold and neither can the kids,” said a woman, who identified herself by her nickname Um Muhammad, who recently fled and was staying at a tent camp near the Turkish border.

“This life, what can I say? We are broken now. I am an old woman with kids, no one is taking care of us,” she said, her face wrapped up in big black scarf against the cold.

The fighting has killed 1,700 people since last April, and the latest military campaign is disrupting aid operations, according to the United Nations. As of Feb. 11, at least 72 health facilities have suspended services due to insecurity or mass displacement, it says.

The UN Security Council held a closed meeting Friday on the escalating violence in Idlib at the request of its European Union members — France, Germany, Belgium and Estonia along with former member Poland.

Afterward, the five EU nations issued a statement expressing alarm at the military escalation and demanding an immediate end to the attacks.

“This is one of the worst man-made displacements that we have seen anywhere in the world in years. And it has been and continues to be entirely avoidable,” the five EU nations said in the statement.

The United Nations World Food Programme said it was forced to temporarily stop food distributions because the recent upsurge in hostilities disrupted the movement of trucks carrying supplies into the region from Turkey.

In the camps, refugees dig up mud from their flooded tent, others dust off the snow dumped by unusually cold spell. New trucks pull up with new arrivals, and mattresses piled on top.

Hooriya Al-Essa, a camp resident who arrived with his family last month from the Idlib countryside, said they lacked heaters, blankets, mattresses and firewood.

“Our situation is very bad. This entire camp is poor. We have nothing. We need help — money, heating, blankets, mattresses,” he said, standing next to a snow-covered tent.

Videos posted online Friday showed a helicopter spiraling downward from the sky, with flames trailing behind as onlookers cheered.

A military official told Syrian state media that the helicopter was hit by a “hostile rocket” in the western countryside of Aleppo province. The unnamed official said the helicopter crashed and its crew was killed. Turkey-backed opposition fighters claimed responsibility, saying it was hit in response to the Syrian army’s indiscriminate targeting of civilians.

The Britain-based Syrian Observatory for Human Rights, which has a network of activists on the ground, said the helicopter was downed Friday in the village of Qibtan al-Jebel, north of Aleppo city. It said two crew members were killed and their bodies were found near the site of the crash.

The Observatory said the helicopter was downed Friday by Turkish military forces stationed in the opposition-held region. There was no immediate comment from Turkey.

Insurgents have sought to acquire portable defense systems to target government warplanes, often acquiring them from seized stockpiles or from outside supporters.

Turkey, a backer of Syria’s opposition, has been deploying equipment and troops in the region, which is home to more than 3 million people, in an attempt to halt the Syrian military’s advances.

But the increased Turkish footprint has also resulted in confrontations with the Syrian troops and clashes between the two sides have killed 13 Turkish military personnel and 13 Syrian troops.

Image: This Thursday, Feb. 13, 2020 photo released by the opposition Syrian Civil Defense rescue group, also known as White Helmets, which has been authenticated based on its contents and other AP reporting, shows Syrian walking outside their tents at a displaced people camp near Turkish border, in Idlib province, Syria. A military offensive on an opposition-controlled region of northwestern Syria has created one of the worst catastrophes for civilians in the country’s long-running war, sending hundreds of thousands of people fleeing, many of them sleeping in open fields and under trees in freezing temperatures. (Syrian Civil Defense White Helmets via AP) 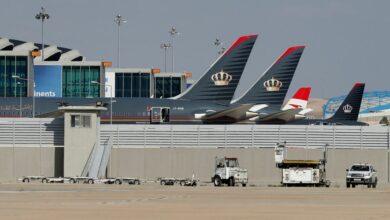 Refugees in fear as sentiment turns against them in Turkey