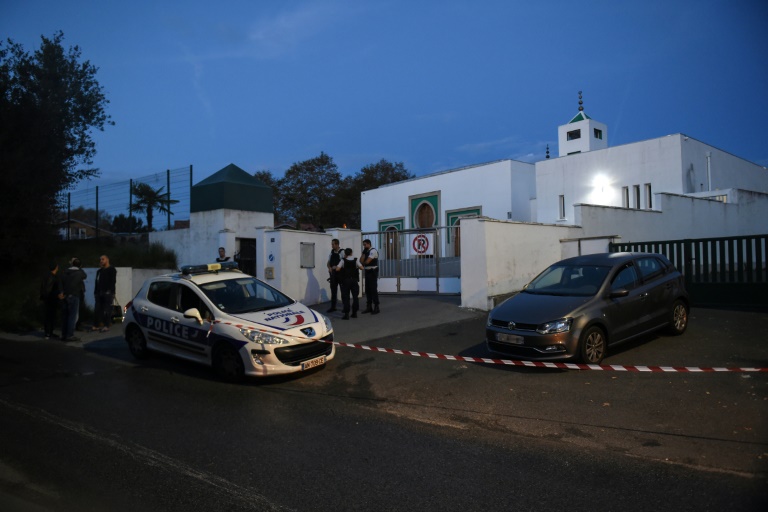 French police were investigating Tuesday the motives of an 84-year-old man with links to France’s main far-right party who attacked a mosque and shot two men in their 70s, seriously wounding both.

The attack in Bayonne on Monday afternoon, in a neighborhood described by its residents as peaceful, shocked Muslims and the community at large, prompting firm condemnation from the government as well as from far-right leader Marine Le Pen.

It struck just hours after President Emmanuel Macron had urged Muslims to step up the fight against what he called Islamic “separatism” in secular France.

The victims, aged 74 and 78, one of whom was hit in the neck and the other in the chest, were in a stable condition in hospital Tuesday, local authorities said.

The shooter, identified as Claude Sinke, had stood as a candidate for Le Pen’s National Rally in 2015 regional elections, but the party has since distanced itself from him.

He told AFP Sinke behaved “like someone with a psychological disturbance. He didn’t like people from the left, nor the centre, and few of those on the right.”

According to the Sud-Ouest local newspaper, Sinke had addressed an angry letter last week to Bayonne authorities and prosecutors, seeking to bring charges against Macron for “non-application of human rights”.

The newspaper published only an excerpt of the letter which it said contained “discriminatory, xenophobic and defamatory” statements.

Authorities said Sinke attacked the mosque Monday as two men were preparing it for afternoon prayers.

The man “approached the building by car and threw an incendiary device against the side door of the mosque,” Bayonne mayor Jean-Rene Etchegaray said at the scene.

“The two people came out, he shot at them, hitting one in the neck and the other in the chest and arm. He then fled.”

The man was tracked thanks to his number plate to Saint-Martin-de-Seignanx, a settlement of some 5,000 people just 16 kilometres (10 miles) from Bayonne, a popular tourist destination in France’s Basque country.

A source close to the investigation said Sinke, who is accused of attempted murder, had admitted to being the shooter. He had also set fire to a car outside the mosque.

In a tweet late Monday, Macron condemned it as a “heinous attack.”

“The Republic will never tolerate hatred,” the president. “Everything will be done to punish the perpetrators and protect our Muslim compatriots. I commit myself to it.”

Interior Minister Christophe Castaner offered “solidarity and support” to France’s Muslims. Le Pen labelled the attack “an unspeakable act” and “absolutely contrary to the values of our movement.”

The National Rally said Sinke was “no longer a member” of the party, which stands on an anti-migrant platform.

Macron, a centrist whose main political rival at home is Le Pen, has been under pressure to show he is serious about cracking down on Islamic radicalism.

The issue re-erupted after the latest attack by an Islamist radical on French soil, in which a police employee stabbed four colleagues to death in Paris on October 3.

The issue again made headlines when a National Rally politician asked a woman accompanying her son and other children on a school trip to remove her headscarf, which he described as an “Islamist provocation”.

On Tuesday, the French senate will debate a draft law proposed by the National Rally to ban parents accompanying their children on school trips from wearing visible religious insignia.

Abdallah Zekri of the French Council of the Muslim Faith (CFCM) said Monday there was “a great deal of concern” among France’s Muslims.

He said attacks such as the one in Bayonne Sinke were “not surprising given the climate of stigmatization of Islam and Muslims”.