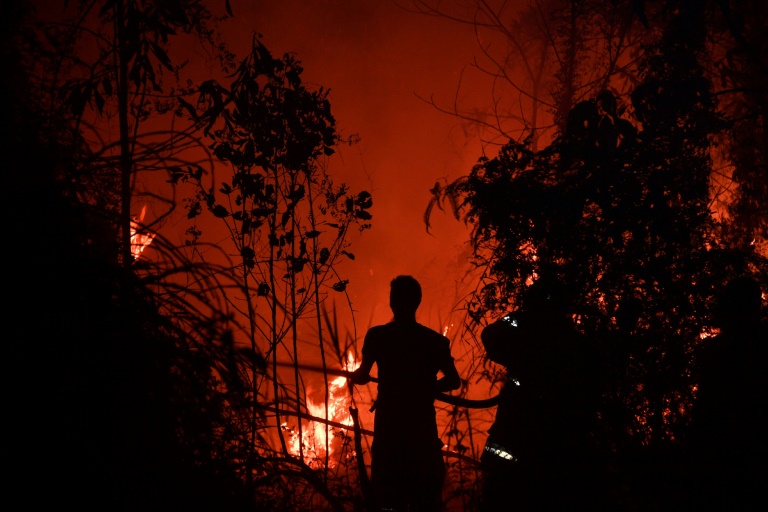 Working around the clock, thousands of firefighters are struggling to contain smog-belching blazes raging across rainforests and farmland in Indonesia, one of the frontlines against fires blamed for aggravating global warming.

Those leading the response are short on equipment, with some wearing just flimsy masks and rubber boots as they blast streams of water at flames consuming the jungle — and enveloping wide swathes of Southeast Asia in toxic haze.

“Still, I have to be ready when duty calls.”

AFP images from the worst-affected areas show the dark silhouette of firefighters set against the orange glow of jungle blazes, endless stretches of scorched earth and charred trees, deserted schools and suffering residents.

The culprit is usually illegal fires set to clear land for farming on Sumatra and Borneo islands.

The most serious fires occur in peatlands, which are highly combustible when drained of water to be converted into plantations.

But Indonesia is only part of a bigger problem.

Huge fires tearing through the Amazon are also compounding concerns about the long-term impact of such blazes — rainforests play a key role in protecting the planet against global warming.

The situation this year has been worsened by drier weather in Indonesia, with air pollution drifting over to neighboring Malaysia and Singapore and stoking diplomatic tensions.

Thousands of personnel and water-bombing helicopters are only keeping the flames at bay and the rainy season — which usually starts in October — could be the only thing able to douse them.

That respite cannot come soon enough for people who live in and around Pekanbaru, a provincial capital on Sumatra blanketed with dense smoke that leaves the sky dark even at midday.

One Pekanbaru clinic has been treating as many as 75 smog patients daily, including a pale and fatigued Hasan Abdullah.

“I’m dizzy and had a fever since yesterday so my dad brought me here,” said the 10-year-old who had oxygen tubes in his nose.

In some communities a mix of fear and anger has set in, with many pointing the finger at those who burn land to make way for crops.

“To the people who started these fires, I say please don’t be so selfish,” said Sri Wahyuni, a 31-year-old mother of three, as thick smoke floated into the backyard of her home outside Pekanbaru.

“Stop putting other people at risk just for your benefit.”

Some worried parents have fled haze-choked areas with their children, although that is not an option for many with community ties and few resources.

“It’s not easy just to get up and leave.”

Image: AFP/File / ADEK BERRY The culprit behind the smog-belching blazes raging in Indonesia are usually illegal fires set to clear land for farming