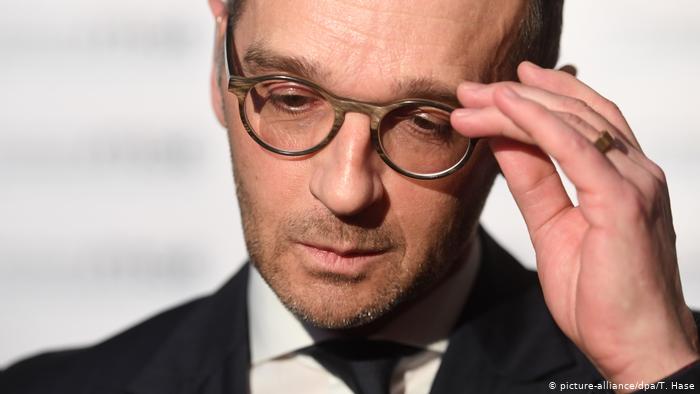 While the US is busy saber-rattling in the Persian Gulf, Germany’s foreign minister is working to preserve the Iran nuclear deal. DW takes a look at the timing of his visit, the various actors involved and their goals.

The risk of war in the Persian Gulf is making everyone nervous. Over the past months, the administration of US President Donald Trump has tightened its sanctions against Iran as part of its campaign of “maximum pressure.” Washington has claimed Iran is planning strikes on US targets in the region and accused it of being behind attacks on four oil tankers off the coast of the United Arab Emirates (UAE). The US has strengthened its military presence in the region and recalled much of its diplomatic personnel from Iraq.

Meanwhile, Iran’s “strategic patience” is growing short: As of July 7, Tehran will no longer abide by all the requirements of the 2015 nuclear deal, unless European nations can find an effective way to economically incentivize Iran to stay in it despite US sanctions.

The big picture also includes an attack undertaken by Yemen’s Houthi rebels , who are supported by Iran, on a strategically important oil facility in Saudi Arabia, Iran’s chief regional rival.

What are the goals of the German Foreign Ministry?

In agreement with the United Kingdom and France, the other treaty signatories, German Foreign Minister Heiko Maas is trying to convince Iran to stay in the deal. Officially titled the Joint Comprehensive Plan of Action (JCPOA), it came into effect in 2015 after hard-fought negotiations. In Tehran, Maas will push for “calm, reason and de-escalation,” a Foreign Ministry spokesperson said Thursday. Maas will also try to walk Iran back from its July 7 ultimatum for European nations.

Maas will advocate in particular for allowing more time for INSTEX — a payment channel set up at the start of the year by the United Kingdom, France and Germany to sidestep US sanctions — to have an effect. However, even if INSTEX works, Maas cannot force German companies to have business relations with Iran; they still fear being hit by US sanctions in some form.

Maas spoke with his American counterpart, Mike Pompeo, during the latter’s visit to Berlin last week. The US was already annoyed by preparations for Jens Plötner, the political director of Germany’s Foreign Ministry, to travel to Tehran, and is critical of European efforts to save the nuclear deal. Maas’ Iran trip, the first by a German foreign minister in 2 1/2 years, is not likely to be viewed favorably by Washington.

What can Maas expect in Tehran?

Iran is looking for practical ways out of the US sanctions trap. It considers the “maximum pressure” campaign tantamount to an economic war that has already caused significant damage: Iranian oil exports have plummeted, and the value of Iran’s currency, the rial, has gone down by two-thirds since sanctions were reintroduced last year. Inflation is skyrocketing, and while food and medicine are technically excluded from the sanctions, Iran’s isolation from the world financial system has led to shortfalls.

The situation has first and foremost benefited hard-liners in Iran’s regime, who had already warned in 2015 that the West could not be trusted. Maas’ visit to Tehran takes place amidst high pressure and low expectations for concrete results, even though the International Atomic Energy Agency (IAEA) has recently concluded once again that Iran is meeting the requirements of the nuclear deal.

Earlier this week a speaker for Iran’s Foreign Ministry rejected discussing non-deal-related topics, such as Iran’s role in the region or its missile program, describing them as “irrelevant.”

What is the American position?

Trump has recently sounded more conciliatory, stating he is not seeking regime change in Iran or looking for war, but is open for talks. He has also quietly lowered the goals of his sanction policy, now saying he only wants to prevent Iran from developing an atomic bomb.

In this regard, the US president contrasts with his national security adviser, John Bolton, who for years has been calling for regime change in Tehran. Bolton has also significantly contributed to the escalation in the Gulf: On May 5, he blurred the “red line” for military action, stating that any attack on US interests or its allies would be met with “unrelenting force,” while failing to define exactly what those interests and who those allies are.

In his recent overtures to Iran, hard-liner Pompeo dropped the 12 far-reaching conditions he set out last year, conditions that would be an affront to any sovereign nation. Yet his recent call for Iran to act like a “normal nation” seems to indicate that while Pompeo may have adapted his rhetoric to match Trump’s, his demands have not really changed.

Observers are unsettled that Trump appears to be the only thing standing between Bolton and war with Iran.

What could happen next?

After the dispatch of an aircraft carrier and bomber squadron, various diplomatic efforts are now being undertaken. Once Maas leaves, Japanese Prime Minister Shinzo Abe will travel to Tehran to act as a mediator in a diplomatic effort Trump has expressly welcomed. Iraq and Oman, both of which have strong ties to the US and Iran, will also seek to act as mediators.

Their prime goal must be to get the US and Iran to engage in direct talks. But this will not happen without the US lifting some of its sanctions. In the long run, there will be regional stability only if there is an agreement on a shared security framework that meets the interests of all the actors involved, including Iran and Saudi Arabia, which are vying for regional influence. In early June, Iranian Foreign Minister Javad Zarif announced his country was open to talks with Riyadh.