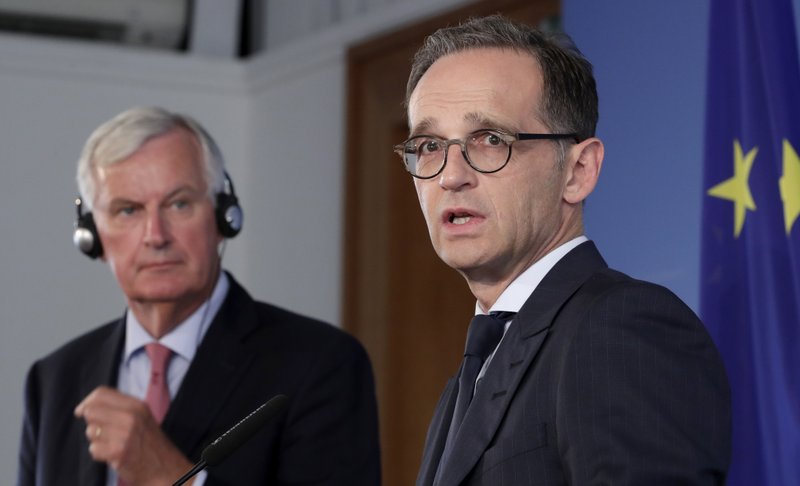 VIENNA (AP) — Germany and some of its European Union partners voiced fears Friday that a possible land-swap between Serbia and Kosovo could open up old wounds in the Balkans rather than resolve their long-standing differences.

NATO intervened in 1999 to stop a bloody Serb crackdown on Albanian separatists in Kosovo. Kosovo unilaterally declared independence from Serbia in 2008.

At talks between EU foreign ministers in Vienna, German Foreign Minister Heiko Maas said that any exchange of territory “could rip open too many old wounds within the population. And that’s why we are very skeptical about this.”

Kosovo President Hashim Thaci said in early August that he rejects the idea of dividing the territory along ethnic lines, but he said he is open to discussing “a correction” of borders during EU-mediated peace talks with Serbia. However, Prime Minister Ramush Haradinaj on Friday said that any land swap would bring new tragedies in the Balkans.

Kosovo is recognized as a nation by more than 100 countries, but Serbia and five EU countries — Cyprus, Greece, Romania, Slovakia and Spain — refuse to do so. Spain, for example, fears that such a move might encourage Catalan or Basque separatists.

Karin Kneissl, the foreign minister of Austria, whose country currently holds the EU’s rotating presidency, said: “I don’t want to lecture but border changes have always have brought new problems with them.”

“This can, let’s say, have a very negative effect on other countries in this region. That’s why you need to be very careful here,” he told reporters.

Tensions between Serbia and Kosovo remain high after seven years of negotiations even though the EU has made it clear to both governments that they must normalize relations if they hope to join the bloc.

Some Serbian government officials have suggested a possible solution could be a land swap based on where ethnic Serb and Albanian minorities are concentrated — Kosovo’s northern Mitrovica region for Serbia’s Presevo Valley.

Thaci told The Associated Press on Aug. 1 that there would be no “division, but a correction of borders” that could possibly make the Presevo Valley a part of Kosovo. He didn’t say whether that would involve a trade of northern Mitrovica, where the majority of Kosovo Serbs live.

But Haradinaj wrote on his Facebook page Friday that “continuous public debate on border re-designing and a land swap is an invitation for new tragedies in the Balkans.”

“We have paid a high price for peace we enjoy nowadays and we wouldn’t like to enter into dangerous scenarios to restart a new NATO intervention,” said Haradinaj.

Belgian Foreign Minister Didier Reynders said that it’s up to Belgrade and Pristina to decide.

“I believe it’s up to them to establish what might be the elements of an agreement,” he said. “It’s not up to the European Union to provide guidelines on what should be in it. We are trying above all to support their discussions.”

Romanian Foreign Minister Teodor-Viorel Melescanu agreed, saying that once the two reach a clear understanding, this would “help us very much, other countries who have not recognized Kosovo, to arrive at a final decision about it.”

Serbian Foreign Minister Ivica Dacic said only that his country is committed to finding a compromise, “but we’re not sure yet when it is going to happen.”

The presidents of Serbia and Kosovo meet in Brussels on Sept. 7 to continue the negotiations.